Cyclone Nilofar to rapidly lose strength from October 30; it may turn into a boon for Gujarat

Cyclone Nilofar to rapidly lose strength from October 30; it may turn into a boon for Gujarat

During the approach of any cyclone, more weightage is given to estimating how severe that cyclone is going to be but in the case of Cylone Nilofar, calculations have reversed. Surrounded by enemies—atmospheric conditions like dry air and vertical wind shears which oppose intensification—since its formation, the fate of Cyclone Nilofar has become more clear now and, hence, one should focus on estimating how “alive” it will be when it strikes Gujarat.

Cyclone Nilofar is projected as reaching “very severe cyclonic storm” strength on India Meteorological Department’s (IMD) scale and a strong misconception that "it will be a powerful, disastrous cyclone for Gujarat and Pakistan” still exists. Lots of people are posting on social networking sites that “Cyclone Nilofar will be intensifying to a Category 3 strength storm and, hence, it poses a big threat to Gujarat,” which is highly inaccurate. But why did these misconceptions arise in the first place?

The thumb rule that everyone must understand is there exists a huge difference between a Category 3 cyclone in a sea (away from land) and a Category 3 cyclone over land (during landfall). If any cyclone is projected to intensify to a Category 3 or even Category 5 cyclone (equivalent to super cyclone on IMD’s scale) by weather forecasters, it doesn’t mean that it will hit the land with the same strength. It may also be possible that the cyclone may weaken rapidly en route and hit land without so much force and hence cause very low intensity damage. Majority of cyclones weaken only after they cross over land (after landfall) but there are a few (like Cyclone Nilofar) which weaken much before they reach land. 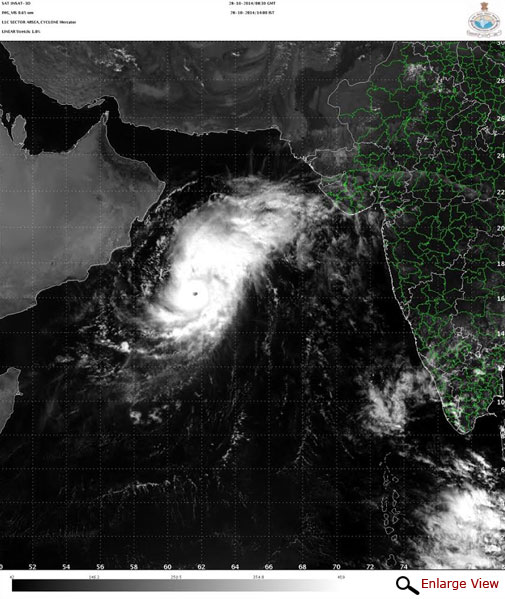 This morning at 11.30 am (IST), as per IMD, Cyclone Nilofar was located near 15.9°N, 61.6°E, which is still 1,110 km south-west of Naliya (Gujarat) and 810 km east-southeast of Salalah (Oman). According to US’ Joint Typhoon Warning Centre (JTWC), maximum sustained winds today morning were 90 knot (167km/hr) gusting to 110 knot (204km//hr). As mentioned in the previous post, Cyclone Nilofar rapidly intensified from maximum winds of 60 knot during the night of October 26 to 90 knot by the night of October 27. Peak winds have been steady at 90 knot since then.

However Nilofar will be intensifying further to a Category 3 strength later today (Tuesday). Maximum winds are expected to touch 100-105 knot (185-195km/hr) before Nilofar starts weakening from Wednesday night.

Impacts on Oman and Gujarat

Cyclone Nilofar will fly by coastal Oman and it’s confirmed that it won’t be landing in the country. Hence no direct impact is expected as the nearest distance of the cyclone from Oman coast is estimated to be around 350 km on Wednesday evening. Still strong winds along the coast coupled with some rainfall and partly cloudy sky in the interior areas (like Muscat) will be experienced on Wednesday. As Arabian Sea will be rough, people should stay away from the eastern coast of the country.

Nilofar will then curve towards India and considerable amount of dry air along with high vertical wind shears will rapidly erode the system. As per the present estimates, it’s expected that Nilofar will strike northern Gujarat coast (near Naliya) on the morning of Saturday, November 1, 2014 with maximum sustained winds of around 35-45 knot (about 65-83km/hr) and gusting close to 100km/hr. The strength will entirely depend on how much Nilofar erodes from October and hence the estimates can even decrease. People of northern Gujarat should follow weather updates for the latest developments.

From evening of Friday, wind speed will increase in the coastal areas of northern and central Gujarat; these areas will experience rains, too.

Possible impacts in these areas

1) Due to winds, uprooting of some trees, snapping of power cables possible and damage to weak shelters/huts.

The effect of Nilofar will vanish from November 2.

As of now it is estimated that the system won’t remain strong enough to impact Rajasthan. Areas of the state adjoining Gujarat will receive some rainfall on October 31 and November 1.