Should changing names of threatened ecosystems be the only way to induce more consciousness of the coming environmental cataclysm? 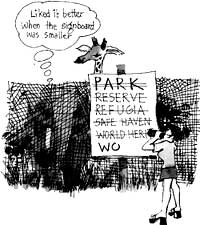 we all are aware of how our warming planet has raised one formerly obscure specialty, climatology, to urgent prominence. There are more to come. Standby for changes to that enthusiasm of the biological scientists and the leisure industry, which we call 'parks' and 'reserves'. Such simple names may not suffice much longer. They are already qualified these days as local, regional, national, highland, wetland or marine. Other more urgent names are being invented as it helps in fund-raising to have a distinct title. Where appropriate, the grander ones like the Grand Canyon are dignified as World Heritage sites.

The first intimation of the changes on the way is the current tendency to refer to them as 'refugia' and to ask keepers, now called 'managers', to monitor their condition much more anxiously and in much greater detail as indices of how things are going with climate change.With luck parks, alias refugia, alias safe havens for ecosystems, may become so significant that they really have to be preserved.

What are the changes in protected area management that climate change promotes? There will be so many that the question is really where to start. For instance, take a simple proposition for managers and supporting campaigners. Should they or should they not put more advocacy effort into linking existing protected areas into long corridors so that ecosystems can move gradually along protected paths to cooler niches as their original locations become untenable? That sounds logical enough and many corridors are being canvassed. But are there any basic figures to use in argument with threatened interests such as farming or forestry?

Apparently figures on rates of ecosystem change relative to rates of climate change do not exist. More disquiet must arise from the possibility that climate change might not necessarily be a gradual progression towards a 1.5-3 c rise over a century. It might be very rapid in particular areas due to changes in ocean currents or increases in sea surface temperature with immediate consequences in, say, increased aridity. How do you decide a strategy in the face of such uncertainty?
Climate change will force attention on relative priorities for the management of different biomes. With regard to forests, for example, the tropical rain forest movement perhaps should let itself be overtaken by the boreal forest defence brigade. This latter body does not, to my knowledge, yet exist but perhaps it ought to.

Wetlands are likely to become a management nightmare if they are not already. Because of the increased future variability in the hydrological cycle, wetlands will run higher risks of drying out. Warming of 3-4c could eliminate as much as 80 per cent of the remaining wetlands and the drying of peat will release more greenhouse gases. On the coast, things will be worse especially in marine parks with mangroves. They will be particularly vulnerable to disruption by future sea-level rise - probably half a metre in the next hundred years. The complexities of mountain regions are just as great and the lack of baseline data against which to measure the changes just as pressing. Here, however, is the third, vertical, dimension to compound problems. Snow cover has already shrunk in area and duration. Glaciers are decreasing in volume the world over.

The majority of existing parks, reserves, or other protected areas, were created to protect a single species or an ecosystem or a heritage feature in a time when nobody thought about climate change and before tourism had grown into the world's fourth-largest industry. And such is the likely speed of change, with far faster rates of species extinction and landscape transformation than in all geological history, that if we want to keep something of the present fading equilibrium and richness of the biosphere, we shall have to have many highly-qualified managers of refugia and gather much knowledge to handle the turbulent times to come.

That will be a challenge but worse still will be the question of an accepted world framework in which protected areas are given their due. World Conservation Union's Commission on National Parks and Protected Areas has launched a strategy with all too many necessary complexities. It recognises that partnerships are needed between managers of parks and reserves and the surrounding community - public and private sector and government agencies. It wants the focus of management to switch from inside the area to the needs of people living around them. It sees the need for raising environmental awareness through worldwide media and the need to find new funding sources. The need to handle and disseminate data and information about protected areas is also recognised. It sounds like a recipe for endless, inconclusive committee meetings and funding proposals and misunderstandings and suspicions. But, alas, no one knows a better way to make things happen.