The river roars with whitewater in some sections while in others it flows gentle and placid holding secrets of whirlpools twirling along slowly downriver. People cross the river on a daily basis on precariously twitching man-made cane-bamboo bridges, often on bikes too. These bridges not only connect villages but also increase the genetic flow between the various clans of the communities since marriages from communities in villages across the river are quite common. People practise several types of fishing in the river and also collect the pentatomid bug 'taari' (Halyomorpha picus, an edible stink bug) from below the rocks on the riverbank. Several thousands of bats live in the caverns along the river bank that are inaccessible to the communities and birds like waders and cormorants are not uncommon in the riverbanks. Winter picnics from December till February are common too when various groups of people, even of different age-groups carry utensils and cook and make merry by the river bank. Their wet rice cultivation or terrace cultivation patches are all mostly along the river valley, the irrigation being provided by the canals and streams that flow year-round to the river. In short, the river means everything to the communities along the Siang valley in central Arunachal Pradesh in north-east India. The communities I write about here are the Adis of the Eastern Himalayas and the river is the Siang, the 'Everest' of rivers. 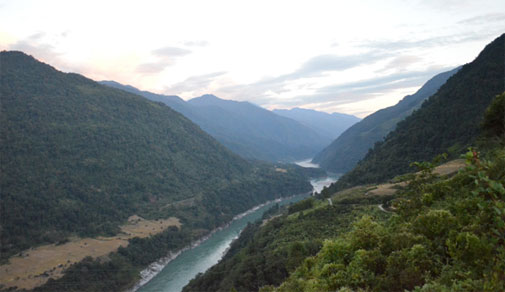 To begin with, it is difficult to even imagine that the Yarlang Tsangpo river that starts from Manasarovar lake near Mount Kailash (22,020 ft) and flows easterly about 1625 km across Tibet, the Siang river that flows north–south in Arunachal Pradesh and the Brahmaputra river that flows westerly in Assam are one and the same. The river flows through the deepest gorge in the world (about 5000 m deep) and bends towards the south-east due to the Namchi Barwa peak (25,445 ft) to enter India at Gelling in Arunachal Pradesh. The terrain where the river flows and turns towards India is so rugged that the discovery that the Tsangpo is in fact the Siang was only made a little over a hundred years back by Kinthup, a Pundit who meticulously explored Tibet.

This majestic river that flows through some of the least traversed areas in the world and through relatively undisturbed forests in Arunachal Pradesh is now severely threatened by 44 hydropower projects that are planned on the river and its tributaries (Dandekar & Thakkar 2014). The length of the Siang river in Arunachal Pradesh is about 290 km and if even just the three larger projects among these are undertaken, there will be no free flowing water left! About two-thirds of the river will be converted into a reservoir with only a third left as free flowing water regime. This will have serious irreversible consequences for wildlife, forests and people of both Arunachal Pradesh and Assam downriver. While about 24,000 hectares of forest will be directly affected due to the 44 projects, other forests will also be affected due to construction activities that will last for at least 10 – 15 years that will also open up access to hitherto relatively undisturbed forests and wildlife.

A 'cumulative impact study' including downstream impacts was undertaken by R S Envirotech Technologies for the Central Water Commission and presented in a report in December 2013. This study systemmatically listed the biodiversity values of the Siang river basin and assessed the cumulative impacts of the projects. It was acknowledged that while direct loss of 24,000 ha of forest due to submergence would occur, 'nibbling' effects of the projects during construction works, quarrying and road-building would lead to further major loss of forests. It was also reported that these reservoir based projects will affect aquatic life migration due to the conversion of lotic environment to lentic habitats causing species extirpations. Downstream impacts of these projects were also evaluated and listed as causing drastic daily fluctuations in river flows downstream, loss of fisheries, changes in wetland ecology in the floodplains, impacts on agriculture, impacts on livelihoods of people and also increased flood vulnerability. For instance, it was estimated that daily water level fluctuations in the D'Ering wildlife sanctuary will be more than 23 feet in the non-monsoon seasons!

Notwithstanding the information provided, the report falls short of various aspects in listing the 'cumulative' impacts of the 44 projects planned and more importantly the recommendations of the study completely contradict their findings. Firstly, 'Cumulative impact is the impact on the environment which results from the incremental impact of the acton when added to other past, present and reasonably foreseeable future actions regardless of what agency (federal or non-federal) or person undertakes such other actions (as defined in CEQ 1987, 1508.7)'. Here, 'impacts' include ecological, aesthetic, historic, cultural, economic, social, or health, whether direct, indirect or cumulative (CEQ 1987). The cultural, social and aesthetic impacts of the projects have been completely ignored in the study. Several collateral impacts of the projects such as those due to sand and boulder mining and road construction which often have been shown to have disastrous effects on river ecology (Padmalal et al. 2008) have been mentioned in the report but the recommendations made to control these effects are cursory. The report has also not assessed the damage that villages downstream in Assam will incur and has only focused on the impacts in few urban places (Dibrugarh, Bokaghat, Tezpur and Guwahati).

The most ludicrous aspect of the report is that after mentioning the disastrous impacts of large-scale hydropower projects, such as direct and indirect loss of forests and wildlife, critically affecting migration of fish species and thereby causing species extirpations and several downstream impacts, the recommendations of the report are to drop 15 small-scale projects (capacity less than 100 MW). The three larger projects, Siang Upper Stage I & II and Siang Lower projects, will lead to a forest loss of over 18,000 ha and together are of about 12,500 MW capacity. Overall, the 44 projects are of 18,300 MW capacity and will lead to a forest loss of over 24,000 ha whereas the report recommends dropping of 15 projects that constitute 473 MW and will cause a forest loss of 334 ha; a mere 2.6 % of the capacity and 1.4 % of the forest loss!

Large dams also increase the risk of flash floods due to dam breaches; in the year 2000, there was a flash flood due to a dam breach in Tibet and the Siang river water level increased by 30 m in less than 10 hours. These floods claimed 30 lives, left more than 100 missing and about 50,000 homeless in four districts in central Arunachal Pradesh. Various local organisations such as Siang Indigenous Farmers Forum, Forum for Siang Dialogue, Siang Peoples Forum and Adi Students Union have been opposing the three larger projects on the Siang river. In spite of the fact that their cultivable lands will be submerged if the projects are undertaken, the Adis and the local council Kebang that regulates all their decisions related to community land and water, were never consulted during the planning of these projects and during signing of the Memorandum of Agreement between the State Government and North East Electrical Power Corporation. In July last year, a Public Interest Litigation was filed by citizens of East and Upper Siang district in Gauhati High court against the Siang Upper Stage II project.

In North-east India, the people and the wildlife, both terrestrial and aquatic are intricately dependent on the rivers. The Siang or the Brahmaputra that supports livelihoods of millions of people in India and the biocultural landscape it is located in is being envisaged to be converted into a powerhouse for electricity generation for others who have no stake in it. The communities that live along the river are majorly dependent on the river in many ways; they harvest an array of aquatic flora and fauna, they undertake agriculture in the river valleys and also use the river for transport. The natural annual changes in the river water levels are also important to the people in Assam and they have adapted to these fluctuations over several decades and ill-planned hydropower projects can disturb this delicate balance. It is high time that we realise that such projects can cause irrepairable physical, social, economic and ecological damage such as the one we recently witnessed in Uttarakhand.

Karthik Teegalapalli is a researcher with the Nature Conservation Foundation (http://ncf-india.org/). His PhD research is on shifting cultivation by the Adi community in the Upper Siang district, Arunachal Pradesh which involved field work in the district in the last four years.