Dancing to the World Bank's tune

The World Bank, which is the largest lender of aid to the Third World, is casting its shadow on decisions made by the Indian Union ministry of environment and forests. 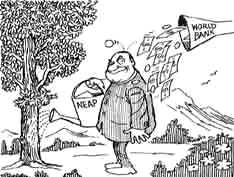 AS PART of the national environment action plan (NEAP), the Union ministry of environment and forests (MEF) is preparing numerous projects, financial assistance for which it will seek from the World Bank (WB). The NEAP was developed at the insistence of WB, which exercises considerable influence over developing countries because it is the largest international lender to the Third World, providing more than $20 billion each year.

WB considers NEAPs a key factor in promoting sustainable development. The revised operational directive it issued in July 1992 declares it will make the national environmental action plans "an integral part of development policy and investment decision-making".


India, which is already behind schedule in submitting its NEAP, organised a meeting on September 26 and asked the participants to suggest project outlines under the NEAP. The meeting dealt with the issues such as conservation of biodiversity, forests, wetlands and wildlife as well as environmental education, environmental impact assessment, reduction of water pollution, improvement of the urban environment, training of workers and developing new institutional structures.

A proposal was made to establish a Rs 1,200-crore ecological regeneration bank to provide credit for tree plantation. Under another project, a National Institute of Environment Management will be set up in Bhopal.

Though the presentations at the meeting were informative, a sense of direction was missing. Besides, the limited time made the MEF merely list the projects it could develop, instead of making a comprehensive NEAP, listing key environmental problems with suggested solutions.

According to WB, NEAPs should establish priorities among several areas of environmental concern and identify the different types of environmentally sustainable investment schemes to be undertaken.

What the MEF is likely to get is a mix of project ideas, limited in scope to areas with which it deals directly, but not a national development and environment policy. Besides, the MEF is developing projects only for possible grants, and this will happen at the cost of other internationally financed projects. As WB plays a leading role in coordinating national aid and will give increasing priority to NEAPs, money will go to projects falling within the set of priorities identified by the MEF. WB's revised operational directive clearly states that NEAPs should reflect national priorities. This means taking into account the country's priorities even for such issues as international financial and technological assistance.

The Indian NEAP is, however, limited in scope and has not made any attempt to blend the country's development policy with environmental sustainability. Besides, it is far from comprehensive and has disregarded major issues like water management, population pressure, improper farming and the impact of price distortions -- issues that do not fall under its direct jurisdiction.

Therefore, a number of projects that await international assistance are likely to be refused aid if they do not form part of the NEAP. By default, this will shift the identification of national priorities from the Indian government to WB and other aid agencies.

This has happened in other countries as well, where WB-led NEAPs were developed. In Lesotho, a controversy surrounds a dam project, which will supply water and energy to South Africa. The project will inundate part of the already impoverished mountain kingdom and entail massive resettlement and water shortage. The NEAP, however, fails to give due emphasis to the issue of water management.

Unless the MEF broadens this exercise and involves a multidisciplinary team from within and outside the government, it will be difficult for it to attain the goal of a national plan. This will result in the current exercise neither helping the environment, nor providing the government with the leverage to coordinate international funding. The first step in this direction should be to initiate a process that is not influenced and limited by WB.