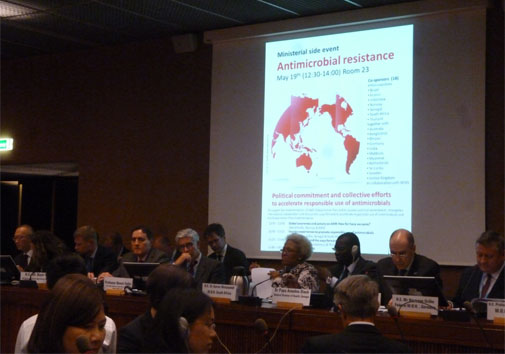 It must be rare for the host of an international meeting to attend a side event. But that is exactly what happened on the second day of the World Health Assembly. WHO Director-General Margaret Chan entered when the event on "Political commitment and global efforts to accelerate the responsible use of antimicrobials" was in progress.

Ministers from these countries shared their experiences with antibiotic resistance. The Netherlands described how using a popular icon worked for them. One of the country’s supermodels caught an infection which could not be treated because of resistance—an effective drug could be found only after the seventh attempt. People became aware of the issue when she told her story. The country also uses a popular comic series to create awareness. Other countries talked about standard surveillance, stewardship and business models, among other measures.

The meeting is in preparation of the discussion on the draft global action plan on antimicrobial resistance to be discussed today. Chan requested the countries on the dais and the US to support the action plan. Whether member states accept the plan will be clear only when the subject is taken up by the committee today.

At the same time, Rajata Rajatanavin, public health minister of Thailand, said that "action without a plan is better than a plan without action". He revealed that his country had been taking action against antimicrobial resistance for some time now, but it was only two weeks ago that a committee was set up to develop an action plan.

Public health experts would be the happiest if this action plan is not cleared. They point out that other than political will, combating antimicrobial resistance needs technical support and finances. It seems WHO is yet to estimate the money needed for implementing a strategy like this.

It is crucial to remember that new antibiotics are not even in the pipeline. The pharma industry often demands public funds to do the research, but does not want to provide the result of this research (if they succeed in finding a new drug) to people at affordable prices. Many of these points were raised by the Indian delegation at the executive board meeting. The fear is that India too will agree to the action plan despite these reservations.

Health minister J P Nadda came in late, spoke and left immediately. He was not there when Chan asked countries to accept the plan, nor when the audience raised critical issues. At a chance meeting near the elevator, he was evasive about issues India planned to raise at the assembly, but he did say that India was looking for a leadership role.

A study by Delhi-based non-profit Centre for Science and Environment (CSE) showed that antibiotics are being used rampantly by the poultry industry. But India does not have any regulation on controlling the use of antibiotics in this industry. We do not have limits for antibiotic residues in chicken. CSE has asked for a comprehensive set of regulations.

Nadda at the meeting talked only about misuse of antibiotics by doctors while treating people. He also mentioned that a policy is being developed to tackle antibiotic resistance and that vets need to be brought to the table. What has stopped him from doing this until now? Unless the policy deals with antibiotic use in animals, it might be difficult to protect people.