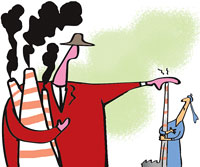 Last fortnight we discussed the clandestine endgame afoot at Cancun to change the framework of the climate change negotiations to suit big and powerful polluters.

Since then Cancun has concluded and a deal, in the form of a spate of agreements, has been gavelled into existence by the chair. Commentators and climate activists in the Western world are ecstatic. Even the critics say pragmatism has worked and the world has taken a small step ahead in its battle to fight emissions that determine its growth.

Let’s assess the outcome at Cancun to see if this is indeed a step forward. It is well-accepted that to keep the world below the already dangerous 2°C temperature increase, global emissions need to drop to 44 billion tonnes of carbon dioxide equivalent (mix of greenhouse gases measured in CO2e) by 2020—against the roughly 48 billion tonnes of CO2e emitted currently. In other words, the world has already run out of atmospheric space and has to cut emissions fast and drastically.

That’s why at the Bali climate conference in 2007 the target placed on the table was for the industrialised countries to cut emissions 20-40 per cent by 2020, over their 1990 levels. The actual number was to be finalised at subsequent meetings. So what does Cancun do? It mouths some platitudes that the industrialised countries will scale up their mitigation efforts but does not specify a target.

Instead, it endorses an arrangement that emission reduction commitments of industrialised countries will be decided on the voluntary pledge they make. They will tell us how much they can cut and by when. The US, which has been instrumental in getting the deal at Cancun, is the biggest winner. If its target to reduce emissions were based on its historical and current contribution to the problem, the country would have to cut 40 per cent by 2020, over the 1990 levels. Now it has pledged that it will cut zero percentage points in this period. The Cancun deal legitimises its right to pollute.

This is not all. Under the Cancun deal, all countries, including India and China, are now committed to reduce emissions. India’s pledge to reduce energy intensity by 20- 25 per cent by 2020 is part of this global deal. After all, all countries must be part of the solution. It is also in our best interest to avoid pollution for growth.

But surely nobody can agree that the burden of the transition should shift to the developing world. But this is what has happened at Cancun. If you compare the sum of the “pledges” made by the industrialised countries against the “pledges” made by developing countries, including China and India, a curious fact emerges. While the total amount the rich will cut comes to 0.8-1.8 billion tonnes of CO2e, poor developing countries have agreed to cut 2.3 billion tonnes of CO2e by 2020. In other words, emission reduction promised by the industrialised world is pathetic. And the principle of equity in burden-sharing has been completely done away with.

Let us be clear, Cancun makes no pretence that global equity is a principle best trashed into the world’s dustbin. Just consider. All previous drafts of this agreement stated that developing countries would have equitable access to the global carbon budget. This has been crucially diluted in the Cancun agreement. It reads in a fuzzy and meaningless way that there will be “equitable access to sustainable development”. We have surrendered our demand to apportion the global atmospheric space based on our right to development.

This is not the worst. For a moment let’s say India should be willing to pay this price for the global common good. But the pledges will add up to practically nothing in terms of averting the worst of climate change. With the Cancun deal in force, the world is in for a 3- 4°C temperature rise. We are most vulnerable. Already, when world average temperatures have increased by just 0.8°C, our monsoons are showing signs of extreme variability leading to floods and droughts. Then how can a weak and ineffective deal on climate change be good for us?

But the spin masters want us to believe otherwise. The Western media is hailing Cancun as the much-needed breakthrough. That’s because the Cancun deal protects the interests of the rich polluters. It is their prize.

What has the developing world got in return? There is no commitment to cut emissions needed to avert climate change. No money is promised either. The agreement provides for the creation of a green fund and repeats the decision to give US $30 billion as fast track funding by 2012 and US $100 billion by 2020. But this is fictional money to cajole and bribe. The fact is that the rich world is saying openly it cannot pay because of recession. It now wants the developing world to look for these funds in the private sector. The technology deal is even weaker. It only says that it will set up a technology centre. The tricky issue of preferential access to intellectual property rights over low-carbon technologies has been skipped altogether.

The fact is we hate being hated in the rich man’s world. Cancun was about our need to be dealmakers on their behalf—even if it costs us the earth.