Death of a genius

Nonconformist to the core, Linus C Pauling epitomised the spirit of science and peace 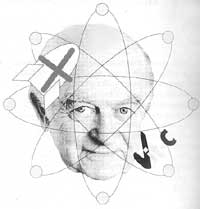 LINUS C Pauling, the only man to have won the Nobel Prize twice, both times unshared, died on August 22, 6 years short of a century. Pauling won his first Nobel Prize in chemistry in 1954 for his brilliant insight into the nature of the chemical bond that glues atoms together to form molecules. He received his second Nobel Prize for peace in 1962. In fact, Pauling would have made it a hat trick had he deciphered the double helix structure of DNA. He was considered the closest rival to Francis Crick and James D Watson, who eventually unravelled the molecule's helical design.

Pauling was also one of the strongest advocates of vitamin C. So staunch was his belief in the anti-ageing virtues of the vitamin that his daily intake was 300 times higher than the dose recommended by the US Food and Drug Administration!

Pauling had begun advocating peace long before he had received the Nobel Prize for chemistry. In 1949, he helped to organise a Congress for Peace in Mexico City. He was assisted in his noble venture by stalwarts from various fields, including W E B Du Bois, the educator and writer, Paul Robeson, the singer and actor, and Charlie Chaplin, the actor.

A man of supreme self-confidence, which sometimes bordered on arrogant, Pauling often irked other scientists with his remarks. Recently, in an interview to a magazine, he said, "My success as a scientist has been largely the result of having broader knowledge than most scientists, in particular, having a remarkable extensive knowledge of empirical chemistry and also knowing mathematics and physics."
Pauling was instrumental in laying the foundation of modern chemistry, biochemistry and molecular biology. In fact, the British magazine, New Scientist, hailed him as one of the 20 greatest scientists of all time, putting him on the same pedestal as Newton, Darwin and Einstein.

He authored more than 1,000 papers on a vast spectrum of subjects. As a distinguished chemist, he bagged all the awards in his time -- the Davy Medal, the Willard Gibbs Medal and the G B Priestly Medal, among others. In mathematics, he was awarded the Pierre Fermat medal. He received 48 honorary doctorates from universities across the world, including Oxford, Cambridge, Princeton and Delhi. He also taught chemistry at Oxford University, the University of California at Berkeley and Stanford University.

While still in his teens, Pauling devoured books on physics, chemistry and mineralogy. After graduating from the Oregon Agricultural College (now Oregon State University) in the US, he did his doctorate in physical chemistry from the California Institute of Technology in an astonishing 3 years. He then went to Europe to master the newly emerging field of quantum mechanics from masters like Neils Bohr and Erwin Schroedinger. In his own words, "By the late '20s, I was the only person in the world who had a good understanding of quantum mechanics and an extensive knowledge about chemistry." In 1939, he crystallised his knowledge and insights into one of the most influential tomes of all times -- The Nature of Chemical Bond and the Structure of Molecules and Crystals.

Pauling was a dedicated pacifist. During World War II, he declined to work for the infamous Manhattan project to make an atom bomb. He was branded a communist sympathiser because of his anti-nuclear stance. The US state department even revoked his passport. It was after a lot of persuasion by fellow scientists that he was allowed to go to Sweden to receive the Nobel prize for chemistry. Pauling, however, remained unrepentant. Soon after his return, he wrote a book, No More War, and organised anti-nuclear demonstrations. He also played a major role in persuading the 2 superpowers to ban atmospheric nuclear tests in 1961.

Having played his part as scientist and pacifist, Pauling began dabbling in the science of nutrition. In 1971, he authored the controversial book, Vitamin C and the Common Cold, where he extolled the drug as a panacea for common cold, cancer and heart disease. To lend scientific credence to his theory, he even went to the extent of setting up the Pauling Institute of Science and Medicine at Palo Alto in 1973.

Pauling became the cynosure of the media in 1992, following a series of findings that linked vitamin C with disease resistance. He believed that vitamin C was responsible for staving off his prostate cancer for 20 to 25 years. And that's not all. He also felt that had he started taking megadoses earlier, he would have celebrated his centenary!