In the Western approach to stories on the environment, topics are wrapped in neat packages: from rainforests to big dams. But writing on rural development or women's education can also reflect concern for the environment. 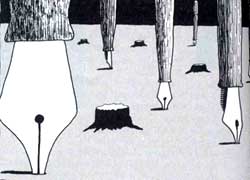 I'VE JUST made a rather chastening, even humiliating, discovery. To prepare for this piece, I glanced through the two huge files of yellowing cuttings, which record my 70 months or so of subcontinental reporting for The Guardian. And in all that time, I've written only a couple of dozen longish articles on what might fairly be described as environmental issues.

How embarrassing, I thought to myself. But after a few moments of reflection, the excuses and explanations began to flow. The Guardian may have only one staff reporter based in Delhi, but there are many specialists in London who have, with or without visiting the place, written about environmental issues. Nuclear safety, the Narmada project, the Chipko movement, drought control, flood control and many other subjects, have all been discussed in The Guardian's feature pages in my time here.

My own modest contributions are not really the whole story. I have written frequently about subjects which do not come directly within the "Big E" heading, but are nonetheless central to the environment debate. To describe the plight of bonded stone-quarry labourers, for example, is inevitably to describe the blighted landscape they work in. Rural development, as a subject, is nothing if not about the environment. Likewise railway developments, women's education and training, urban deprivation and a host of other matters on which I have attempted to inform my mostly British readers.

In short, it was a silly exercise to sift through the cuttings files looking for environmental pieces, as if they could be crisply defined or isolated. In doing so, I have betrayed my essentially Western approach, in which everything is neatly bracketed and packaged. Environment? Oh yes, that's about saving tropical rainforests and cuddly animals, and stopping other people having nuclear power. Add soil erosion, the wickedness of building big dams, the population explosion and that just about wraps it up.

That's nonsense of course, whether it comes from west or east, north or south. The environment, as a concern, isn't just about the big issues of the day, like Narmada, global warming and deforestation. It is about the way, and where, we all live. And if that is true, it is a pretty good defence of the role of newspapers and journalists.
It would be folly to suggest that most newspaper articles, from the subcontinent or wherever, have a theme of environmental concern. But it would be equally perverse to argue that newspapers have ignored that concern. After all, that Environment (with a big E) has become one of the hottest debates of our age. Why? Because newspapers and the other media have made it so.

Twenty years ago, flooding in Bangladesh, for example, would commonly be attributed to official incompetence, or plain providence. Now, it would be rare to read any analysis that did not draw attention to Himalayan deforestation and subsequent disastrous river siltation. Similarly, there is new understanding (not discovered by the papers, but reported by them) of the dangers of chemical overloading of land, of introducing alien crops, of urban pollution and so on.

Having made that very general point, I will return to the initial apologetic tone. Of course, newspapers could do more to address specific environmental concerns, specifically about the subcontinent. It's too easy just to say that this is the job of the subcontinental papers. It's our job, too.

So why don't we do it? I will let you into an unguarded secret: It's too difficult, too time consuming and not very rewarding. Environmental articles are rarely "stories" ; they are, too often, complex, multi-faceted, inconclusive essays. If they are written too briefly, they are simplistic; if written at length, they can be corrosively tedious. (And if you are bridling at the idea of British readers bring bored by Narmada, ask yourself when you last read and thoroughly enjoyed a detailed account of European water pollution levels, which affect many more people in just as deadly a way).

Environmental stories, notoriously, take longer than most to research and to write. That's why many correspondents tend to put them off to a day, which never quite comes. They, and their editors, prefer on the whole juicy, succinct accounts of crime, human passion, corruption, or whatever else that politicians are up to.

I am only half-joking. Daily newspapers are, after all, about the events of the day (or the day before). If they are worth their salt, they also examine the background to the issues of the day, and that includes the environmental ones in all their stupendous variety. As it happens, I think we make quite a good fist of it.

Derek Brown is the South Asia correspondent of The Guardian.