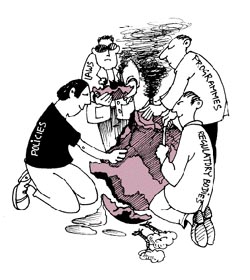 environmental degradation manifests itself through bioindicators, but it is not easily understood by many stakeholders. There are many reasons for this. Firstly, the boundaries of adverse environmental impacts are not easy to demarcate as they do not respect the jurisdiction of states or state pollution control boards (spcb s). It is also difficult to access the extent of the damage. Another major problem for the regulatory agencies is sourcing mixed effluents and emissions. Thus, the easy way out for the resource-constrained government agencies is to be a 'stakeholder' like others, instead of taking proactive steps to undo the damage.

Technology or market forces do not favour the environment. Hence, to save the environment from degradation, what is needed is policy interventions. Physically, this would mean getting priorities organised.It would mean choosing to reduce industrial effluents, for instance, at the source itself rather than encourage construction of common effluent treatment plants and disposal facilities (landfills). Or dispersing old vehicles to rural areas rather than converting them to run on alternative eco-friendly fuels. Or making farmers aware of the benefits of organic farming in the long run rather than distributing pesticides and fertilisers to increase crop yield in the short term. Let us not change the system before deciding where we are headed.

India has laws, rules, plans, policies, programmes, projects, regulatory bodies and standards. But, this knowledge and expertise is centralised mainly with government institutions and is often contradictory. The 25 spcb s in the country, meanwhile, are made scapegoats. Chasing industries primarily, they are responsible for the "wholesomeness" of water, air and soil. The state environment departments are usually not involved or informed. They are solely dependent on spcb s for data while the district administration, though involved in almost every aspect of the citizen's life, is for some reason quite oblivious of environmental problems.

At the decision-making level, the victims of pollution (the stakeholders) often have no say. Information on the environment, which is most needed by the stakeholders is available if at all, on the Internet or in closely-guarded files of the spcb s. Non-governmental organisations are there everywhere, but are heard and respected only when they operate close to the corridors of power. This Centre-orientation seems to please everyone - the decision-making fraternity, the government and the industry. The judiciary, too, which is environmentally active on the public interest litigation level, operates only at the Supreme Court and high court levels. It the lower courts, ancestral status and caste linkages still continue.

The age-old conflict between development and the environment, which was acknowledged by the West, is yet to be understood in India. Economists are often looked upon suspiciously by environmentalists. Micro-economic approaches have never been thought of. One such approach is the Safe Minimum Standard, which explicitly states that we should avoid irreversible environmental damage unless the social costs of undertaking the project is infinite.

Defining short-term measures, therefore, becomes an exercise in proactive environmental management, using micro-economic approaches as close as possible to the scene of environmental impact. To begin with, we should use available laws and systems, suitable economic models and applicable technology. It will involve hands-on training and empowering the directly-affected stakeholders. In this effort, the overstaffed spcb s have an important catalytic role to play. Besides, the laws do not come in the way of the needed destructuring initiative, which could take place as follows:

l develop a broad environment policy and support it with a plan for about 20 years, set milestones to achieve parameters;

The author is member-secretary, Andhra Pradesh Pollution Control Board, Hyderabad