Democracy and approaches towards nature 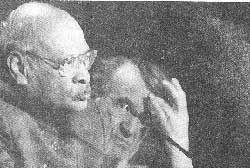 THE Cold War has ended and so has the bipolar superpower configuration. The universal acceptance of democracy as a preferred form of government has had its impact. In shifting decision-making to the people through their elected representatives, the prospect of the people themselves having the final word in shaping their own destiny in the real sense, is bound to create a new situation in the structure of the State itself.

In India, we have come a full circle -starting with village republics or assemblies thousands of years ago and going on to kings, conquests, empires. state assemblies and back to the emphasis on village panchayats, where the focus is on local decision-making.

We have found that the king can rule. but it is not effective. We have found that we can make laws in the Parliament but they are only to be observed in the breach. We have seen that the state assemblies -where there is a federal structure -can legislate, pass laws by the dozen, but they do not work because even the legislators do not seem to have much faith in them. So finally, whatever is the will of the people has to reach the people and they have to implement it through their local small face-to-face communities which in India are called panchayats. So, this is the full circle we have come back.

The question of environment is also assuming basic proportions, impinging on the very survival of humankind. Here again, there is a serious dichotomy between various approaches to nature and nature's resources legitimately available to us. To go back a little into recent history. when the able "modern" Western civilisation set forth to discover the secrets of nature -when I call it modern, I put it in quotes because it is just in the matter of time that it is modern, not in the matter of content -its intention was to conquer.

We, in India and the East, on the other hand, had always looked upon ourselves as a part of nature and subject to its laws. This is clear from all our ancient texts, all our customs, all our methods, the way the villagers live, the way the tribals of India live in the forests. They are part of nature. They are not out to destroy it. They are not out to over-exploit it. They are not out to conquer it. Literature in all languages of India, both written and oral, clearly brings out the fact that humans have always considered themselves a part of nature and not conquerors.
Humans were thrilled by their mastery over nature and exploited it excessively and mercilessly. However, nature now threatens to commit suicide unless it obtains redress, The problem that has been under- There is a serious stood in time is the problem of environment. "Sustainable development" is no .longer a mere slogan of enthusiastic environmentalists. It has come to be accepted as a major determinant of development various approaches policy, and, therefore, the technologies of the future. the industries of the future and the economic activity of the future have to take into account this limiting factor of the environment. We cannot really do what nature's has been done for the last few centuries of destroying nature by over-exploiting it.

And, this has resulted in a global controversy between the industrialised and developing countries. It is a good augury for humankind and the earth that in 1992 we could agree on Agenda 21 at Rio.I hope those who agreed at that time wIll not start disagreeing. will not start back- tracking and will hold themselves answer- able and committed to that Agenda. Although not all countries were fully satisfied with it, it is a good beginning and I hope one of the most hopeful phenomena of the next century is going to be the follow-up on Agenda 21, It is important that the adversarial attitude towards nature is replaced with a healing relationship between the earth and human civilisation. Therein perhaps lies the solution. although it can only come in the long term.

This is an extract from Prime Minister P V Narasimha Rao's address to the World Economic Forum in Davos, Switzerland on February 2, 1994.