Denial of the rural

85 per cent urban population will be a disaster

A tendency has been gaining ground in some influential circles lately that India's development is closely and necessarily linked to a path of very rapid urbanization. Finance Minister P Chidambaram forcefully articulated this view recently (in an interview to Tehelka, May 31, 2008). He said, "My vision of a poverty free India will be an India where a vast majority, something like 85 per cent, will eventually live in cities."

Currently, only about 30 per cent of India's people live in cities and about 70 per cent live in villages. So Chidambaram's vision means a massive transfer of 55 per cent population from villages to cities. How does he justify such massive relocation? Chidambram says, "In an urban environment it is easier and more efficient to provide water, electricity, education, roads...security rather than in 600,000 villages." Several long-suffering city dwellers will no doubt ask that if that is so, then why are water and electricity shortages so acute in our cities? Why are so many urban children out of school? Why is the crime rate so high? If this is the situation when about 30 per cent of population live in cities, what will be the situation when 85 per cent live in cities?

But the most basic issue relates to Chidambaram's emphasis on depopulation of villages, so that rural dwellers are reduced to 15 per cent from 70 per cent. Such massive transfer of population will mean that land will have to be cultivated in a highly mechanized way, the sort of costly mechanization that only the corporate sector will be able to afford. So it is most likely that in the villages of Chidambaram's vision, farming will be dominated by corporate sector and/or very big farmers. Such agriculture will be necessarily more energy-intensive. Mechanization might increase production in the short term in a few areas, but within a few years soil health and land fertility will suffer and energy costs will become too heavy. 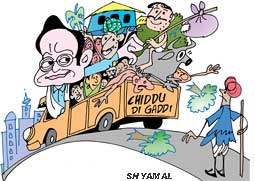 Also, how will millions of families that are supposed to leave villages get a satisfactory livelihood, assuming they get some sort of housing? It is well known that modern industry is capital-intensive and has low employment potential. Opportunities of government employment have been getting lesser, not increasing, in many areas. An India of 85 per cent urban dwellers could easily mean a lot more unemployment and a lot more discontent and crime.

It is also not correct to say that it is more difficult to provide basic facilities in villages. In fact in a rural setting the dependence on energy-intensive life style is less. At the same time there is a huge potential to make villages self-reliant in energy by choosing a location-specific mix of windmills, micro-hydel and watermills, solar energy, bio-gas etc. Similarly water-shortages can be more effectively tackled in villages by water-conservation, water-harvesting and by repair and maintenance of traditional water sources. Education based on equal opportunities and education which brings children closer to nature also has more potential in villages.

A troublesome aspect of ideas which support massive depopulation of villages is that these can be easily used to justify projects that involve large-scale displacement. Chidambaram does assert, "If the laws are inadequate, strengthen them, but in the name of the environment...please don't say that the poor should remain poor for the next five thousand years." When asked about opposition to Vedanta and posco projects on mining and steel, in Orissa, Chidambaram says, "This could be categorised as a conspiracy of the socially driven classes to keep poor people poor. What is the quality of life we're talking about? These districts of Orissa have remained poor since the earth dawned." The reality is that many villages in Orissa, and in other states, are humming with activities, capable of providing sustainable livelihoods to several generations. As any school child of Orissa will tell you, the state's history is full of rich examples of sustainable livelihoods based on rich traditional wisdom in agriculture, crafts, forestry.

Bharat Dogra is a senior journalist