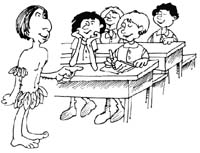 IF you are a twelve or thirteen-year-old school child in Kansas, USA one of your text-books is to be doctored by fundamentalists. The modified sections are on historical geology and palaeontology. Chapters on fossils, and oil and gas deposits are to be deleted. For the young of Kansas, the history of their particular part of the planet starts rather recently with the arrival of "Native Americans". Who they were and when they first walked on to the piece of the planet, now called Kansas, is still uncertain.

In the Kansas case the perpetrators of the suppression of information, who are Baptists, hold strong religious views to the effect that creationism, as expressed in Genesis, is the only explanation for the beginning of the ordered universe and of life itself. Their strongly held beliefs recently came to dominate the policy of the Kansas School Board. What they wished to keep from their children was Darwinism, the evolutionary theory based on the survival of the fittest in competitive reproduction, or adaptive change.

Religious reaction to Darwinism led to a growth in fundamentalism in the United States starting in 1909 with the publication of 12 books called "The Fundamentals". The insistence on biblical infallibility led to attempts in the 1920s to forbid evolution being taught in public schools. Tennessee, among other states, passed a prohibitory statute (repealed only in 1968) which led to the famous trial in 1925 of the schoolteacher John T Scopes accused of teaching evolution. Scopes was found guilty, but his conviction was overturned by the state supreme court. This body, nevertheless, upheld the prohibitory statute. The us Federal Supreme Court declared a similar statute unconstitutional in 1968.

In 1981 the scientific creationism movement led to Louisiana and Arkansas legislating that both theories should be taught in their schools equally. This, although overturned by the Supreme Court, is a more defensible approach than that of Kansas attempting, in 1999, to ban altogether the exposition of a whole field of knowledge.

As for Darwinists, themselves few, if any, would support the suppression of discussion of creationist views. They regard the history of the original controversial reception of Darwin's Theory of Evolution as interesting in its own right. An open attitude to free discussion characterises cosmologists interested in the origin of the stars and galaxies where the current orthodoxy of the "Big Bang" is no less difficult to relate to the everyday world of human experience. These theories, too, have fallen foul of the fundamentalists who have been encouraged by the reopening of an old controversy.

The veteran astrophysicist Sir Fred Hoyle has just published "A Different Approach to Cosmology" in which he intensifies his long sustained attack on the Big Bang theory. He asserts that the basic astronomical surveys are incomplete and he restates the Steady State model. Neither theory is remotely consonant with Genesis. To ban the advocacy of these theories would be an intellectual crime unless motivated perhaps, by the desire to spare minds untrained in the complexities of the arguments.

Scientific reaction in usa is severe ranging from concern to outrage. The Council of the American Geophysical Union issued a statement saying that the Union "affirms the central importance of scientific theories of Earth history and organic evolution in science education. Creationism is not science and does not have a legitimate place in any science curriculum."

One political commentator blamed it all on rural poverty: "Rural areas have always been hotbeds of Christian fundamentalism, and this hasn't changed in 80 years. There is in Kansas, as everywhere, an educated class, who deplore this sort of thing. They just don't happen to be active on the state school boards where the Christian Right has been very active. The real downside is the extent to which the poor become dumber, and thus poorer still and dumber. The great divide here is in income disparity, which has grown by leaps in the past 10 years. Anglican church observers say that the reaction of children in these fundamentalist families is one often strongly opposed to their parents. So we might expect to see in the future some grassroots rethinking on anti-Darwinism."

The truly troubling aspect is that religious fundamentalism all over the world seems to appeal more to the poor and disadvantaged and to encourage the same tendency to reject modern scientific perspectives and styles of thinking. They are an unhappy constellation of linked causes and effects.