Building cities around only motor vehicles is fatal

Building cities around only motor vehicles is fatal 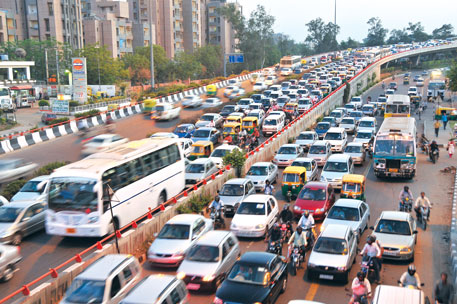 Editor of this magazine Sunita Narain was injured in an accident while cycling. We are shocked at the seriousness of her injury. We are angry about the unforgivable neglect of what it takes to keep us safe while walking and cycling in our cities. Our policy-makers have not yet woken up to the dangers of building cities around only the motor vehicle. As Narain fights pain to bounce back to action we are stunned by what is going wrong in our cities. Those who commute by walking and cycling outnumber those who use motor vehicles, yet road design is changing rapidly to accommodate more motorised and high-speed travel, increasing the risk if accidents. The World Health Organization no longer treats road accidents as just a cause of injury, but as a larger public health concern because it adds to a country’s disability burden. Building cities around vehicles is not our destiny.

It is not inevitable. It is reversible. And this has been proven globally. Rich cities have begun to take action to reverse automobile dependence to become safe, clean and energy efficient. This imperative is driven by the stark fact that the world’s cities use up 73 per cent of the world’s energy; cities’ air adds to the respiratory, cardiovascular and cancer burden; and traffic accidents, according to UN-Habitat, kill more people than any natural or humanmade disaster.

Globally, cities are changing road and urban design to allow people to walk and cycle safely. Denmark and the Netherlands, where the share of bicycles had declined rapidly until 1970s, have reversed the trend. In Amsterdam and Copenhagen, today the share of bicycle ridership is 38 per cent and 35 per cent, respectively. This far exceeds the share of car trips in Delhi. They don’t build wide roads anymore; instead, they add cycle and pedestrian lanes. Many European cities have brought liveability, road safety and human dignity to the forefront of transportation planning. They use a variety of methods to calm and reduce traffic. German cities have considerably reduced accidents. Chinese cities are bringing back bicycle lanes.

It is important to understand why more than 90 per cent of the deaths in road accidents occur in developing countries, despite these countries accounting for 33 per cent of the world’s motor vehicles. Do not think it is only because of rapid motorisation and lax enforcement of traffic rules. It is also because of the way cities and roads are designed there. These countries are not making sensible and compact cities any more that shorten distances. Cities with more wide streets and road networks with low population density have a much higher fatality rate compared to more compact cities. A study of the Transportation Research and Injury Prevention Programme at IIT-Delhi shows even in the Western world road transport injury rates can vary among cities with similar incomes and population by a factor of three to five because of differences in urban and road design.

Infrastructure once built can permanently decide the commuting choices of people, so act now. If it is not easy and safe for people to walk and cycle, they will shift to personal vehicles. Flyovers, signal-free roads and foot over bridges give primacy to speed, attract more cars and remove people. Narain was hit at the foot of the clover leaf flyover near the All India Institute of Medical Sciences. Delhi boasts 66 flyovers and wants more without realising that they increase the speed of motorised vehicles, hence accident risk.

The IIT-Delhi study shows the probability of a pedestrian fatality in collisions with different vehicle groups in such areas can rise by 67 per cent to 200 per cent. Ironically, road design hinders cycling in Delhi, where over 35 per cent households own bicycles and less than a quarter own cars. Delhi has the highest number of cyclists but most of them cycle because they cannot afford anything else. India produces about 3 million cars a year but 12-15 million bicycles a year. The bicycle industry confirms that more people are opting for high-end expensive cycles. But this business does not translate into a new mobility paradigm because of systemic barriers.

Delhi was the first city in India to adopt robust street design guidelines, with exemplary details on pedestrian and cycling infrastructure. But this remains on paper and the Public Works Department is obsessed with flyovers that disrupt the traffic circulation of the area, increase distances for motorists criss-crossing the area and block safe cycling and walking access.

It is ironical that the other road, Aurobindo Marg, that cuts across this flyover on Ring road (where the accident had occurred), was recently reconverted—at the instance of the traffic police—from a signal-free corridor to a “signalised” corridor to reduce accidents. As a signal-free corridor, it had become one of the 20 deadliest roads of Delhi until 2011. But after the introduction of signals it became one of the safest.

The Environment Pollution (Prevention and Control) Authority, of which Narain is a member, had supported the move. Do not let transport infrastructure cause ill health and injury. Build accountability and liability in the delivery of transport infrastructure. Public policy will respond if public opinion is sharp. People have to be angry enough to demand zero-tolerance towards accidents and toxic air.