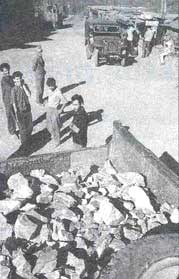 "Was ecology non-existent 25 years ago?" Kalam Singh Rawat's anguished question still rings in my ears, though it is 7 years since the man from Bhatta Village, near Mussoorie, had asked it. Rawat had articulated the feelings of the downtrodden of the area: development means distress for the poor.

He was referring to the not-so-distant past, when limestone quarrying had started in the hills around Mussoorie. The villagers had opposed the new development at that time. "Our forests will be destroyed and our livelihoods will go with them," they had said. But all their Gandhian protests notwithstanding, the bureaucrats and politicians had only said that this was needed for 'development', which would create wealth. Quarrying would mean new jobs and better standards of living.

The villagers had given in to this persuasion. The miners' trucks kept rolling up and down the Mussoorie Hills, leaving ugly scars on the face of the once verdant vale, drying up water tables, leaving the face of the hills open to easy erosion. The younger generation got jobs...their whole lifestyle gradually changed, and they became accustomed to the marginally improved living conditions which they called "prosperity". Meanwhile, in the next 25 years cattle-rearing and cultivation was forgotten by most.

Then, about 7 years ago, it suddenly dawned on the powers-that-be that all that limestone pinching had been 'wrong' development. It had destroyed the ecology of the hills. Scientists and intellectuals pushed through the closure of the mines. The villagers lost their jobs. Once again, Gandhian protests followed. "Give us back our jobs", they said, but to no avail.

The story of Bhatta village is not a new one. It is the periodic mucical-chair played by our policy makers: what is good development today is often discovered to be harmful tomorrow...so shift over. But from where do these concepts and slogans arise?

It is clear that the central source of such inspired concepts lie in the North. And ever since the industrial revolution, 'development' has been inextricably linked with economic growth. Scientific discoveries had made man's powers over nature seem unlimited. The Communists and the Capitalists, both had sought to develop distinct concepts of development, though both did so on the basis of the growth of science and technology. The Reds and their class enemies, both measured progress in terms of economic production, per capita income, gross national product (gnp) and consumption. Naturally, both negated the traditionally diverse patterns of the living communities and led to the disintegration of the age-old community support systems.

It is true that the ideology of the ruling classes seem to the ruled as supremely powerful, and hence, in the post-Industrial Revolution era, the underdeveloped countries and peoples gradually came to be convinced that their own systems of knowledge, whether these be in the field of farming, medicine, regulation of forests, economic orders and even in language and attire, were inferior to those of the colonisers. They had adopted the Northern ideology wholesale. Diversity everywhere was replaced by the mono-culture of the North.

Forty years of the regime of Northern concepts of development and growth has resulted in the underdeveloped countries, where 2/3rd of the world's population lives, having only 15 per cent share of the world's gnp. One product of this process is the growth of a global middle-class, marked by its consumerist lifestyle, where TV-CD-washing machines are fetishes, and bank-balance, the God of Security. In the countries of the North they comprise the largest segment of the population. In the South, they are the "elite"...the intellectuals, officers, senior academics, journalists, executives....

The remarkable monoism of this class, just about 8-9 per cent of the world population, makes it look, dress, behave, act, and think in the same patterns the world over..."a hot shower at 9/ and if it rains/ a closed car at 4". English is their "mother tongue". The Indian middle-class is growing apart from the poor citizens of its own country.

There is no doubt that this segment of the population, though in a minority, has flourished over the ruins of the rest. They change their connotations of 'development' to suit their own material needs and political exigencies...so what if the poor go to the dogs! What is strange is that a system of growth and development which has worsened the lot of the majority of the world's peoples has never been questioned.