Did Ardi walk for sex?

A rdipithecus ramidus, by far the oldest known skeleton of a hominid, or member of the human family, has grabbed headlines around the world since her unveiling on October 2, 2009 in the special issue of Science. Celebrated as mother of all humans, this find is expected to rewrite the human evolutionary history.

Often palaeoanthropologists stumble upon old fossils, but the beauty of this discovery is that they were able to tweak about 125 pieces of bones from one individual which when reconstructed revealed a four feet tall, small brained, human female ancestor who would have weighed 50 kg. This 4.4 million-year-old, near-complete skeleton was nicknamed Ardi. Additional 110 bone fragments belonging to 35 individuals of this species were also unearthed.

One distinct characteristic of the modern Homo sapien is its large brain size.Simply put, standing up freed the cranial space and the brain could evolve; as apes are quadrupled, they have a small brain size. Hence, walking on two legs is a crucial step, literally, in the evolutionary story of modern humans. And Ardi, probably took the first baby steps towards bipedal locomotion paving way for emergence of Homo sapiens. 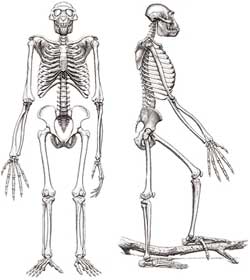 Ardis anatomy is an interesting mixture of modern humans and apes. The upper part of her body had features well adapted to live on trees, but the lower part had features enabling her to be bipedal. Her foot had opposable big toe for grasping tree limbs but she also had a crucial bone (os perineum) which made it rigid, fit for walking on the ground. Her fingers were curved and her arms could reach the knee, just like chimps, to grasp the branches, but the arms themselves were more dexterous that made her better at carrying things while walking on two legs. She could have palm-walked, typical of extinct apes. Her pelvis was funnel shaped, not as much as in Homo sapiens, but adequate to enable upright posture, whereas apes have near flat pelvic bones. Ardi had an anatomy suited for bipedalisma poor and underdeveloped one though. Apes use their sharp canines in battles for territory and for the opportunity to mate with females. But the Ardipithecus males teeth turned out to be surprisingly blunted.

Why is Ardipithecus bipedal even though it is uneconomical locomotion? Why did males lose their canines despite having an evolutionary advantage? Owen Lovejoy, one of the scientists associated with the discovery, has offered a provocative reason. He argues Ardi, or rather her male colleagues, walked to cajole her into having sex.

Lovejoy says instead of fighting for access to females, a male Ardipithecus would simply supply a targeted female and her offspring with gathered foods and gain her sexual loyalty in return. Success in provisioning improves if they had their hands free to carry home loads of fruits and tubers. If each male has his own female, his own private gene receptacle, no need to fight over sex with an ovulating female. Females would come to prefer good, steady providers with smaller canines over the big fierce-toothed ones who left as soon as they spot another fertile female. With the anatomy underdeveloped, being bipedal is not the best way to get around. But the sex-for-food contract would have been an excellent way to bear more offspring. And in evolution, of course, more offspring is the name of the game. 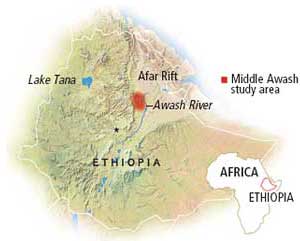 Imagine an Ardipithecus female four million years ago, waking up in the morning, wiping clean a club or a lance, handing it over to her male partner and seeing him off to collect food for her and her children while she stays at home tending the kids, a la Lovejoy. This is nothing but a reflection of modern-day reality of wife handing the briefcase and lunch, seeing off the office-bound hubby at the door while she stays home attending to children and dusting the TV and the photographs on the mantle. If bipedalism is the result of male provisioning, it hardly explains why women evolved this trait.

Women with infants, in fact, foraged larger areas in search of vegetable foods which make up the largest proportion of the diet of most hunting and gathering groups. To assume that some female pre-hominid decided to stay home to raise kids, depending on a man to bring home the basket of food, is more imagination than evident.

T V Venkateswaran is with Vigyan Prasar in New Delhi