Did Riocentro learn anything from Flamengo park?

While heads of state deliberated on the future of the world at the Riocentro, social activists and NGOs expressed their sense of frustration over the dominant paradigm of development. They represented sharply differing perspectives 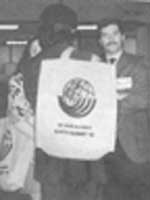 THE RECENT environmental carnival at Rio was an extremely enlightening and educative experience for me being, perhaps, the largest gathering of NGOs, on the one hand, and that of heads of governments, on the other.

There were essentially two parallel events which took place in the first half of June at Rio. The first one was a Global Forum of NGOs concerned with environmental questions from diverse perspectives. This was held in Flamengo park located on one of Rio's excellent beaches. Debates, meetings, personal reflections were organised under tents. What did emerge as a significant theme in all this was the desire of ordinary people to exercise control over developments which could change their lives. It became clear that indigenous people, youth, women and ordinary citizens felt that they had been somehow taken for a ride as the juggernaut of development rolled on globally since World War II.

Simultaneously, and at times almost unrelated to the events in Flamengo Park, was the debate, the exchange and the drama that was unfolding at the Riocentro, the official venue of UNCED Earth Summit. Through a series of highly structured and formalised presentations in the plenaries and conferences, government leaders, kings, presidents, prime ministers, environment ministers and bureaucrats made long speeches.

Despite the rather formal and at times boring structure of these deliberations, they clearly expressed a concern that seemed to be shared by countries as diverse as Japan and Egypt, Pakistan and Holland, Malaysia and Germany. This concern seemed to be that the destruction of the resources of our planet has reached an alarming proportion and something needed to be done urgently at the local, national and global levels. The key issue was whether the environment could be improved; whether different ways of strengthening the environment could be carried out, without necessarily addressing the question of politics.

In contrast, many NGOs, youth groups, indigenous peoples, womens' organisations and representatives of the countries of the South clearly saw a close and ongoing linkage between global politics and environmental degradation. These groups asked for the restructuring of the international economy and politics. They paid attention to questions of debt, trade, structural adjustment and the policies of multilateral institutions.

However, any linkage between environmental degradation and debt, trade, structural adjustment, international economy and politics, the model of capitalism as the dominant development paradigm, was seen at Riocentro as "dirty" politics; as one more occasion for the frustrated NGOs from the South to "blame" people other than their own policy-makers and themselves. To that extent, the character of Flamengo Park differed sharply from that of the Riocentro. It reiterated once again how important it was for NGOs and social activists to make interventions in the Riocentro deliberations.

While the road from Stockholm to Rio over the last 20 years is littered with with pollutants, increasing land degradation and deforestation, the road from Flamengo Park to the Riocentro was obstructed by security guards, tanks and the structural exclusion of politics from the debates and strategies of environmental improvement.

If, for no other reason than this, the events of the first two weeks of June 1992 at Rio de Janeiro have raised the level of consciousness about the intricate link between issues of environment degradation on the one hand, and dominant paradigm of science and technology, development and growth, on the other. Once again it became clear that environmental improvement and regeneration could not be sustained if the contemporary paradigm of development is maintained. It is here, therefore, that the challenge for rearticulating and reformulating new visions of a just and equitable society, living in balance with and within the limits of natural resources, lies. That may well be the most lasting contribution of Flamengo Park to Riocentro.