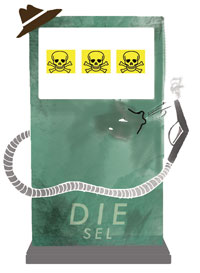 Just consider. Every time petrol prices are raised, oil companies end up losing more money. Simply because the price differential between petrol and diesel increases further, and people gravitate towards diesel vehicles. More the use of diesel, more the oil companies bleed. Worse, we all bleed because diesel vehicles add to toxic pollution in our cities, which, in turn, adds to ill health and treatment costs.

This is very well understood. Yet nobody will do anything to fix the trend.

Today, it makes more sense for the next car buyer to buy an expensive personal car—perhaps even a Mercedes-Benz—but run it on the subsidised diesel. Today, according to government’s own estimates, the use of diesel in personal vehicles has zoomed. Some 15 per cent of the current consumption of diesel is in passenger cars. The agricultural sector uses less—12 per cent of the country’s diesel. This busts the myth that diesel prices are kept low for reasons of public policy. In fact, keeping the price low but allowing its use in the private transport sector is clearly a deliberate policy to use the poor person’s fuel to subsidise the rich.

Oil companies also say that the under-recovery in diesel is now costing them big time. It is estimated that Rs 67,500 crore is lost annually in under-recovery on account of diesel alone. This is roughly 60 per cent of the total losses of the companies. Assuming that private cars consume 15 per cent of the diesel, the direct subsidy to car owners is over Rs 10,000 crore. This is socialism Indian style: taxing the poor to pay the rich. With each increase in the price of petrol, this gap widens. Bad for oil companies; worse for the environment.

The claim of car companies that the modern diesel vehicle is clean is far from true. Emission data shows current diesel cars emit seven times more particulates and three to five times more nitrogen oxides than petrol cars. There is sufficient evidence that tiny particulates—PM 2.5—emitted from a diesel vehicle are toxic and carcinogenic. This toxin is firmly associated with significant increase in cases of asthma, lung diseases, chronic bronchitis and heart ailments. Long-term exposure can cause lung cancer. The increased level of nitrogen dioxide contributes to the formation of ozone, which, in turn, damages our lungs. So be clear, diesel vehicles, however fancy and fitted, are costing us our health.

Today, Europe, which promoted diesel vehicles, is paying a heavy cost. It is struggling to meet air quality standards, even though it has invested heavily in the cleanest of fuels reducing sulfur levels to near-zero and has fitted vehicles with every kind of anti-pollution gizmo like particulate traps and de-NOx catalyst. Diesel also has higher levels of black carbon, which is today understood to be a key contributor to climate change. In the US, the car mecca, where emission standards and price do not differentiate between fuels, there is no market for diesel cars.

So why does Indian policy continue to provide this perverse incentive to pollute? The irony is that there is no policy that allows this use. It is a loophole. Car manufacturers struck gold when they realised that they could sell more vehicles if they could run them on cheaper and subsidised fuel. They exploit the fact that diesel price is kept lower because of its use for transportation of essential goods and for public transport—trucks use some 37 per cent of the diesel consumed and buses 12 per cent. They also know that dual pricing of fuel—different diesel prices for cars and buses or tractors—cannot be operated. They merrily exploit this helplessness.

Government agencies know this. They make all the right noises about the need to fix the price distortion. The market types glibly talk about the need to deregulate diesel. They say this because they know that even though they sit in power, they cannot remove government control over the price of this fuel, which is also essential for railways, transport of public goods and agriculture. They know that the inflationary impact of raising diesel price will be high; they know it will be opposed. But they use this convenient cover to do nothing about the most glaring of distortions—the use of the subsidised fuel by the rich and for private transport.

But given the rising economic cost and pollution, the option of doing nothing is not acceptable anymore. The options are either to link the price with emission standards or to ban production of personal diesel vehicles. If this is not possible, then the government should tax diesel vehicles—200 to 300 per cent of the price of the vehicle—to remove the fiscal distortion in price and policy. Our neighbour Sri Lanka has done so. In India, committee after committee has recommended that this be done. But it is not done.

Clearly, the lobby for big diesel is powerful. Clearly, it sits in glitzy chambers of commerce, which can bend policy to suit purse and purpose. It’s sad and deadly.