Pharma and biotech firms are lobbying hard to block disclosure of origin of genetic material used in inventions, but they also raise thorny issues 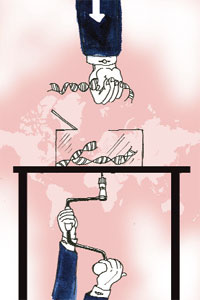 Disclosure is now at the heart of the misappropriation debate—and the centrepiece of vexed international efforts to hammer out a treaty to protect the last major resources of developing nations. Talks in the Geneva-based World Intellectual Property Organisation (WIPO) last month on protecting genetic resources, traditional knowledge and traditional cultural expressions were snarled in serious disagreements as developing countries sought legal measures to safeguard their resources from being plundered.

The most contentious of the issues is on ways to protect genetic resources. While developing countries, fearful of biopiracy, have sought an international legal instrument that would require mandatory disclosure of the source of any genetic resource used in a patented item, the developed world insists that the rules should only ensure that patents are not given wrongly.

The May 9-13 session of the WIPO Intergovernmental Committee on Intellectual Property and Genetic Resources, Traditional Knowledge and Folklore (IGFC) was the penultimate meeting before WIPO’s annual meeting in September which would decide whether to move ahead on adopting agreements. But discussions have been fractious since 2009 because developed nations have stalled such moves towards a treaty.

At the Nagoya conference of the Convention on Biological Diversity (CBD) in October last year, too, developed nations had objected to discussing disclosure when the “Protocol on Access to Genetic Resources and the Fair and Equitable Sharing of Benefits Arising from their Utilisation” was being hammered out.

At last month’s meeting of WIPO, developing countries, specially the African group, were determined to prevent a replay of the debate on mandatory disclosure. Led by South Africa and backed by Brazil, the African group said it would not discuss any other matter until the session came up with a strong proposal on disclosure. India then chipped in, saying “mandatory disclosure is a must; everything else can follow.” However, the US insisted that the objective of the discussions was not mandatory disclosures but rules that would ensure “erroneous patents” were not granted. In fact, the developed countries even objected to any direct reference to the Nagoya Protocol, whereas developing nations hoped it would accelerate an agreement in WIPO.

Interestingly, the very day the WIPO session ended, the biotech and pharmaceutical industries were lauding the role of the US in stopping what it termed “ill-advised and harmful changes to the global patent system”. BIO and PhRMA, the lobby groups for the biotech and pharmaceutical industries, respectively, said in a letter to US Commerce Secretary Gary Locke that “such changes would undermine the ability of U.S.-based innovative companies to protect their inventions and their ability to thrive, create jobs and compete fairly in global markets”. Clearly, industry is set on torpedoing any agreement on mandatory disclosure.

The irony is that BIO-PhRMA claims it supports the principles embodied in CBD and the Nagoya Protocol. It contends that no attempt has been made to show how the proposed disclosure requirements could remedy the unauthorised collection and use of genetic resources. Therefore, they would like the international community to “identify mechanisms that would provide for meaningful monitoring of the collection and use of genetic resources as well as safeguards against illegal uses”. They also laud the “constructive proposals” under consideration by WIPO, which include “a one-stop-shop database to improve the quality of patent examination, model material transfer agreements and guidelines for contractual practices relating to managing intellectual property in ABS (access and benefit sharing) agreements”. This is certain to incense the developing countries.

However, the appendix to the BIO-PhRMA letter should give them some food for thought. It points out practical and conceptual flaws in the proposals made in WIPO. The proposals require patent applicants to disclose the origin of genetic resources or traditional knowledge upon which an invention is based. In some cases, the applicants would be required to provide evidence of prior informed consent and/or fair and equitable benefit-sharing. But in many cases, it will not be possible for a patent applicant to comply with such requirements. “For example, exhaustively determining the source or origin of a genetic resource—which may include cell lines or other genetic resources that have been available on the open market for decades—is a complex, costly, time consuming and ultimately uncertain exercise. In many cases, it may be impossible to determine.”

Besides, by focusing exclusively on inventions, the proposals do not address a fundamental issue: the far greater uses of genetic resources that do not lead to patents. When the WIPO negotiations resume in July, it would be well if developing countries have some kind of counter to these thorny issues.