Distance between Earth and Sun

Measure it yourself during transit of Venus this year

It was nine o’clock in the morning on October 8, 1771. Guillaume le Gentil was exhausted, weary after a long travel and eager to meet his wife.

With hope and expectations he disembarked from the Spanish warship that had brought him back home after a gap of 11 years. Brimming with desire he rushed straight to his house. As le Gentil rapped the door, his valet rushed to open it. Soon the valet turned ashen and was trembling and mumbling, “ghost, ghost”.

To his utter dismay, le Gentil found he had been considered dead by his relatives who had ravaged his estate and sold it off. His wife had remarried and the French Academy, that had sent him on the voyage, removed him from its membership.

Astronomers had computed that the rarest of rare cosmic event, Transit of Venus, was to occur on June 6, 1761. The event was not visible from Europe, but had a good opportunity from India. The French had then colonised Pondicherry. Therefore, the French Academy commissioned le Gentil to undertake the arduous voyage to Pondicherry.

So what made him take up this adventurous and eventful voyage? In fact, he was not alone in this endeavour; hundreds of astronomers like him fanned to four corners of the globe during that period. Their aim was to measure the solar parallax and compute the actual distance between Sun and Earth using the transit of Venus.

Parallax is easy to make sense. Hold your index finger in front of you. Close your left eye and line up your finger with something farther away, such as a door, a piece of furniture, a window, whatever. Now without moving your finger close the right eye and open the left eye. Your finger will seem to move slightly in comparison to the background. Voilà! You are seeing parallax in action. Now bring the finger closer and repeat the action. You will find that the shift is larger. If the fingertip is farther away the shift is smaller.

Now imagine two telescopes at two points of Earth to be equivalent to two eyes; Venus as the fingertip and the face of Sun as the background. From two points Venus would appear to be causing black spot at two distinct places on the face of Sun. By finding this parallax shift we can compute the real distance between Earth and Sun. 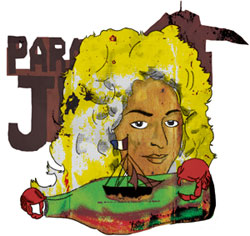 In Europe then, it was believed that if one is able to observe the transit from a faraway place like Pondicherry, then it would give an accurate measure of the distance between Earth and Sun. To play his part in this international endeavour and to claim a share of glory, le Gentil had left the shores of France in March, 1760 unaware of the trials and tribulations that awaited him.

The ship that took him and his equipment sailed around the Cape of Good Hope and reached Mauritius without much problem. But as that ship was not heading straight for Pondicherry, he had to look for another ship going that way. He had to wait for many months before he could secure a ship that would take him to Pondicherry.

He almost reached the shores of Pondicherry, but by then what is called the “seven years’ war” had broken between the French and the English in Europe. The British troupes stationed in Madras had laid siege to Pondicherry. The French ship that carried him could not land and he had to return to Mauritius.

The transit of 1761 occurred while he was still at the sea. With the ship rocking and rolling on the waves, he was hardly able to observe the event leave alone take precise measurement of parallax.

Though disappointed, he did not lose heart. Undeterred, he decided to wait for the next one that was to take place after eight years. He stayed back in the Reunion Island and mapped the coast of Madagascar, studied the indigenous culture and collected samples of the natural history of the region.

In 1766 he decided to move to Manila, well ahead of the transit of 1769, finding that place suitable for his observations. The Philippines was then a Spanish colony and the local governor was suspicious of le Gentil being a French spy in the guise of an astronomer. No amount of pleading could convince the governor and le Gentil had to leave Manila. Once again, le Gentil headed for Pondicherry.

He arrived at Pondicherry in March 1768, well ahead of the transit. He used his spare time to study Tamil astronomy and collected information on the indigenous culture. The local people were hospitable, the weather was fine and clear. He set his equipment for calibration and he was all prepared.

June 4, 1769, the day of transit dawned; the sky was clear and bright. Le Gentil was brimming with confidence. Alas, just a few minutes before the transit was set in, clouds appeared from nowhere and the entire sky was covered. After years of effort and waiting, once again le Gentil missed the event. He later learned that his colleagues in Manila had enjoyed the transit under perfectly clear sky.

This broke his heart. Some say he was almost on the brink of insanity. Exhausted by years of gruelling travel and hard work, he packed his equipment and set sail for France.

But his troubles were not over. As he was about to board a ship he was stricken by a bout of dysentery. Yet, he decided to press on. The sea voyage only made it worse. He had to be left on the way at Mauritius to recover. After a month he boarded a ship, but the ship encountered a massive storm. Badly damaged, the ship returned to Mauritius after many months.

Hapless le Gentil had almost given in to despair. But he gathered strength and gained a place in a Spanish ship. The ship was delayed again and again. Finally after a more eventful sea voyage he returned to France on October 8, 1771, after an absence of 11 years, six months, and 13 days.

When he reached home he was shocked to hear about his wife and relatives. After the intervention of the King of France, he regained his property, married another woman and resumed normal life. By this time, he had become a legend. When he wrote his two-volume memoir A Voyage in the Indian Ocean, it sold like hot cakes and made him rich once gain.

Do you see a pattern? Yes, firstly we can notice that transits of Venus occur only in December and June. Secondly, there is a pair of December transits followed by a pair of June transits.

The year 2012 is here. Unlike the doomsayers’ prophecies of cataclysmic destruction of the world, we are to be enthralled by the transit of Venus once again. On June 6, 2012, when Sun rises in the east, its face would be adorned with a black spot. In Chennai, the sunrise time on June 6 is 5:41 and from that time to 10:21 we can observe the transit of Venus—as a black spot racing across the face of Sun.

Le Gentil had to brave war, cross stormy seas and suffer deadly tropical diseases to observe the transit. We have this golden opportunity only once in a lifetime on the morning of June 6, 2012. Just one hitch—we will have to wake up early at 5.30! Does that deter you? Set your alarm clocks today.

T V Venkateswaran is a scientist with Vigyan Prasar