Relief in sight for states in the grip of swine flu

Relief in sight for states in the grip of swine flu 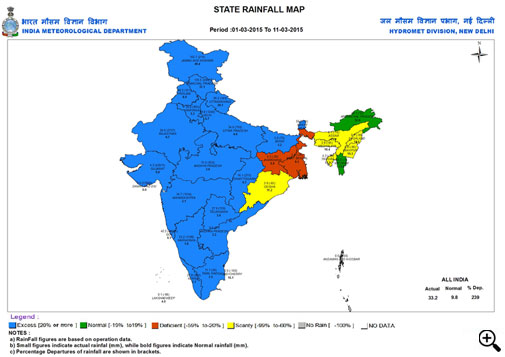 Latest data of the India Meteorological Department (IMD) confirms what most Indians already know from experience. The data shows rainfall received between March 1 and 13 in most areas (coloured blue in the India map) has been in excess of 20 per cent or more. In this period, India normally receives about 9.8mm rain but this time it has received 33.2 mm rain.

The figures in the map may not appear alarming but it’s important to note that these are the weighted average values (weighted mean). In this method of averaging, proper numerical weights (numbers) are assigned to every observation and then their weighted mean is calculated. Rainfall measurement is done in a similar manner as explained by the National Oceanic and Atmospheric Administration (NOAA) of the US. As per this technique, India reported a strong 239 per cent departure (from normal) in rainfall in this period. The weather event which lasted between February 28 and March 3 has been the major contributor in this rainfall amount.

Swine flu’s link to weather events
These back to back rainfall events not only damaged the crops but also kept a lid on the maximum temperatures at many places. Such a condition is usually favourable for the swine flu virus which has been causing a havoc in India. Maximum impact of swine flu is being reported from Rajasthan, Madhya Pradesh, Telangana, Uttar Pradesh, Maharashtra, Delhi and Gujarat. State-wise per cent rainfall departures (March 1 to March 11) in these states are astonishing. The per cent rainfall departures (from normal) in Gujarat is 42,811;  2,757 for Rajasthan; 932 for Madhya Pradesh; 1,240 for Delhi; 720 for Telangana; 1,554 for Maharashtra and 750 for Uttar Pradesh. The rainfall amounts will be even more when the data from past week weather outbreak is considered. 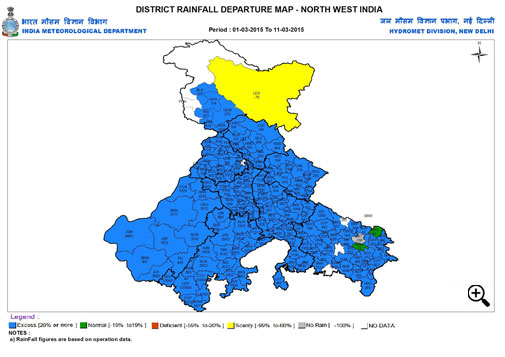 After these havoc-causing events in the initial two weeks, weather in India has started to stabilise. Going by the projection of weather models like Global Forecast System (GFS), it looks like some significant heating is possible over the next couple of days. This is likely to kick off the summer season in India. The meteorological seasons in India, as defined by IMD, are pretty strange. According to its definition, India has a winter season which lasts between January and February but it doesn’t have a summer season. Most of India (except for parts of southern India) witnesses winter conditions mostly from November. IMD defines the October- December period as a post monsoon period. It calls the period of March to May (when India sweats due to significant heating) as the pre-monsoon season.

As per GFS, no western disturbance is expected in India for (at least) one week. Plus, the upper air is also expected to remain stable as no trough is expected over India in the next few days. Hence, the weather is likely going to stay clear at most of the places which would be an important factor in increasing the heat and hence the temperatures--maximum and minimum. Even the swine flu-affected states are going to witness significant heating which would likely result in a drop in the number of swine flu cases. 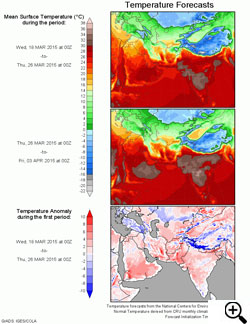 The above image gives an idea of the expected heating. Top map shows the expected mean surface temperature (in degree Celsius) between March 18 and 26, 2015. The scale is given to the left side. Bottom image shows the expected temperature anomaly (in degree Celsius). The long range forecast (March 26 to April 3) given in the middle image may not be that reliable right now but it is possible that the heating will continue in April first week also. Reddish regions in much of India indicate higher than normal temperatures. Below is what can be expected till March 26, 2015.