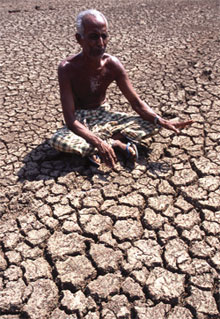 As June ends, the monsoon, it turns out, is deficient by 40 per cent. Despite the forecast of its revival in July, it is a concern for India’s rainfed areas that account for significant foodgrain production and also host the largest number of farmers in the country. More than 100 districts are officially “chronic drought-affected” areas. Why have we not been able to drought-proof them?

On June 28 Prime Minister Narendra Modi had a meeting with the agriculture, home, finance and food ministers. While the media reported on the preparedness for a deficit monsoon, and mostly analysed its outcomes on the basis of the political challenge before the new government, the coverage missed a reality: how a deficit monsoon in June might have already impacted a sizeable number of farmers in India’s rainfed areas.

Trapped below poverty line
Drought has class biases; it impacts the poorest the hardest. It has been well documented that a poor farmer takes three to four years to recover from a drought, depending on the severity. As has been the trend, a severe drought strikes every eight to nine years in India. So, it is a major reason for perpetuating poverty.

Take the drought of 2009, the severest one to strike in the past 35 years and which affected around 400 million people (see ‘A homegrown drought’. It was the first time in independent India that the government declared a drought while the monsoon was still on. The monsoon was deficient by 22 per cent. India’s rice output was around 69.45 million tonnes (mt) in the kharif season—about 15 mt less than in the previous season, according to the government’s first advanced estimates for foodgrain production released in November 2009. Foodgrain scarcity triggered inflation that ranged between 17 and 20 per cent, one of the highest in the recent past.

“A drought of this degree and spread affects the food security of marginal and small farmers the most. The impact would be severe as they already are food insecure,” says M S Swaminathan, a noted agriculture scientist, credited with India’s Green Revolution.

A study undertaken by the International Rice Research Institute in the Philippines and the Japan International Research Centre for Agricultural Sciences, in association with research organisations of Chhattisgarh, Jharkhand, and Odisha, shows that drought is a major factor for keeping people below the poverty line forever.

Published in 2006, the study found that in a severe drought year, farmers in Chhattisgarh, Jharkhand, and Odisha lost close to US $400 million. “The effects of drought are creeping and long-lasting. It cripples the livelihoods of a large number of people, often trapping them in perpetual poverty,” observed the paper.

The study found that in the three states almost 13 million people who live just above the poverty line fall below it due to drought-induced income loss. “As farmers go into debt and liquidate their productive assets, they are trapped even deeper within poverty from which escape becomes more and more difficult,” the study concluded.

Every third district suffers drought
The human development reports of Odisha and Chhattisgarh clearly indicate that drought-prone districts have lower human development indices as compared to the rest of the state. This is the trend in Rajasthan’s drought-affected districts as well.

According to the Union Agriculture and Cooperation Ministry’s Drought Crisis Management Plan document (updated in 2009), 68 per cent of the country is prone to drought with nearly 33 per cent area having a chronic drought problem while another 35 per cent is drought-prone. Since 1997, there has been a “57 per cent increase in the country’s drought-prone areas”, says N C Saxena, a former secretary in the Union rural development ministry.

Most of India’s very poor inhabit the drought-prone areas. The government’s drought mitigation programmes cover 225 drought-prone districts. Thus, every third district in the country suffers from drought. The government has notified 102 districts as chronically affected by drought. These districts have also been rated as the poorest in the country by the Planning Commission of India. On an average, every third year is a drought year in these areas.

Drought and food insecurity
Rainfall data over the past century indicates that there has been a severe drought every eight to nine years. India faced 22 major droughts between 1871 and 2002. The drought of 1987 was perhaps the worst drought of the last century, with an overall rainfall deficit of 19 per cent. It affected nearly 60 per cent of the crop area and more than 85 million people were severely affected.

Five years later, in 2002, India was again hit by a severe drought – the fifth most severe—the year was marked by the shortest ever monsoon the country experienced. Fifty-six per cent of land experienced low monsoon rains, affecting nearly 300 million people. The loss was phenomenal.

Agricultural contributions to the Gross Domestic Product (GDP) dipped by 3.1 per cent and agricultural income losses were estimated at Rs 39,000 crore. Governments supplied 1.5 billion litres of water every day for close to four months through tankers, trucks, and trains.

Rainfed areas are highly drought-prone. On an average, India’s rainfed regions suffer from drought every three years. Often the drought persists for three to six years and affects availability of water for people and livestock and crop and fodder production. Drought has direct and negative impacts agricultural production. Severe droughts in rainfed areas have reduced agricultural production by 20 to 40 per cent. It is no wonder then that farmers in rainfed areas are abandoning farming as a livelihood source (see ‘Farmers have decreased, farm labourers have increased’ ). States like Rajasthan, which are mainly rainfed agricultural areas, have witnessed a dramatic shift from farm to non-farm employment.

Drought in rainfed areas hits small and marginal farmers hard, threatening their food and livelihood security. Most small farmers live in areas where monsoon rain is the only source of irrigation; practise sustenance farming and are able to cultivate only one crop. This also makes them highly vulnerable to drought and climatic changes, like erratic monsoon, eroding their capacity to take risks, restricting their investments in farming, and bringing down productivity. Around 78 per cent of the farmers who committed suicide in the last one decade were small farmers and 76 per cent of them were dependent on rain-fed agriculture.

Right approach
It was the 2002 drought that finally prompted policy makers and development practitioners to account for the fact that drought was perpetuated by human-induced factors like neglect of water harvesting capacity. Since then, rainwater harvesting – specifically revival of traditional systems – has been given priority in drought management, particularly under the Mahatma Gandhi National Rural Employment Guarantee Scheme (MGNREGA).

MGNREGA has been effective in mitigating drought. This was evident during the 2009 drought, when this author made field visits to drought areas. Across India’s chronic drought-prone areas, many poor and marginal farmers seemed to be more prepared for drought than our hesitant government.

They were cheering up to a good harvest, unmindful of the perilously deficit monsoon.

Drought and poverty are interconnected with millions of very poor people living in drought-prone areas. Considering the spread and impact of the problem, drought mitigation requires careful attention at policy level and effective action on ground. Innovative measures like MGNREGA could make an impact. But there should be better reach of such projects. It should be complemented with better monsoon forecast and promotion of other drought-proofing mechanisms such as saving on seeds and grains and easy loans to tide over the rough weather.