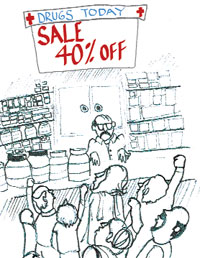 Feisty is what Natco Pharma is. The medium-sized company (turnover: Rs 350 crore) is seldom out of the news for what appears to be a chronic tendency to fight patents on expensive life-saving drugs. Since 2003 when it hit the headlines for challenging Swiss drug giant Novartis’s patent for the life-saving Glivec cancer medication, the Hyderabad-based company has tried several ploys to break patents on blockbuster drugs and produce its generic versions.

Sometimes, its grounds for doing so have been flimsy—as in its 2008 attempt to manufacture and export to Nepal generic versions of two patented drugs: F Hoffman La Roche’s lung cancer drug Tarceva and Pfizer’s kidney cancer drug Sutent. It was the first time that such an application had been made for a compulsory licence (CL) and Natco invoked Section 92A of the Patents Act that allows “export of patented pharmaceutical products to any country having insufficient or no manufacturing capacity for the concerned product to address public health problems. That move had roiled the international pharmaceutical industry, which had expressed strong reservations about India’s patent protection regime.

The CL, though, is a legitimate patent-override option that is permitted under the World Trade Organization’s TRIPs (trade related intellectual property rights) regime, provided certain conditions are met. According to Section 84 of India’s patent law which deals with CLs, an application can be made to the Controller General of Patents three years after the date of grant of a patent if requirements of the public have not been satisfied or if the patented invention is not available to the public at a reasonable price.

It is these provisions that Natco is using for its third attempt to make a patented drug by offering to aggressively price it at a fraction of the innovator’s price. In December last year, it had sought a voluntary licence to make a low-cost version of Pfizer’s antiretroviral drug Maraviroc. The voluntary licence is usually a prelude to seeking a CL because then the applicant can claim that he has made reasonable efforts to obtain a licence from the patent holder. While the Pfizer drug costs around Rs 66,000 for a month’s medication, Natco had promised that it would supply it at Rs 15,000 per month. However, the marovaric foray appears to have come to a dead end with a company spokesperson admitting that it had yet to respond to Pfizer’s queries. But Natco did not wait long to stir the pot again. Soon thereafter, it filed a CL application for Bayer drug—this is being described as a landmark case by health activists and patients—to manufacture the multinational’s liver and kidney cancer drug Sorafenib tosylate (brand name: Nexavar), saying the drug is too expensive and that it could provide it at close to 1/32 of the price charged by the patent holder. Interest in this case is high for several reasons. To start with Cipla, the enfant terrible of the generics industry, has already launched its version of the drug at about Rs 28,000 a month’s treatment against Bayer’s price of Rs 2,80,482. With Bayer filing a patent infringement suit against Cipla, the Mumbai firm has responded with a revocation suit. That case is still pending.

In its dossier to the Patent Office, Natco provides some dramatic figures. It says that in 2008, about 8,900 Indians were diagnosed with kidney cancer, and about 5,733 died from the disease (source: Harvard Center for Cancer Prevention). At present, “there are at least 100,000 patients in India suffering from different forms and types of renal cell carcinoma and hepatic cell carcinoma”, and on an average, about 30,000 patients are added to this list every year. It claims that over 24,000 patients die in India every year on account of these diseases. If it is granted a CL to manufacture sorafenib, Natco promises to maintain supplies of around two million tablets a day, although the estimated demand is for 480,000 tablets a month—and all of it at a cost of just Rs 74 per tablet. This would work out to Rs 8,880 per month of treatment for a patient, sharply undercutting Cipla’s price, which is more than a third costlier. Western innovator companies have pointed out that such measures do not really address the issue of access to drugs in India. This is true enough. And so is the fact that most people in this country cannot afford the prices they charge for life-saving drugs. Herein lies the problem.