Recent headlines worldwide reported the US government’s use of a fake vaccination programme in Pakistan for counter-terrorism purposes. Whether the story is true or not, the damage is already done once there is the slightest suspicion that a medical activity like a vaccination campaign may have a motive other than providing healthcare. Impartial humanitarian assistance requires acceptance from all communities and warring parties—whether national governments, armed opposition movements, international forces, or even criminal groups. In all conflicts or in highly politicised environments, access to humanitarian aid can only be achieved and maintained over time by actions that demonstrate humanitarian aid providers are acting only in the interests of those receiving care.

In countries like Pakistan, humanitarian aid organisations have struggled to gain access and acceptance within communities, skeptical of the motives of any outside assistance. My organisation, Médecins Sans Frontières (MSF), for example, has been working in Pakistan since 1986, providing free medical assistance to displaced communities and to Afghan refugees, to victims of conflict, and to people with limited access to care.

To ensure its independence in Pakistan, MSF relies solely on private financial contributions from individuals around the world and does not accept funding from any government, donor agency, or from any military or politically affiliated group.

All this work can be easily undone by states’ misuse of medical activities and facilities for intelligence-gathering—at the high price of civilian lives and health. Using medical aid as a camouflage for military advantage threatens the lives of patients in the most precarious and embattled places worldwide. 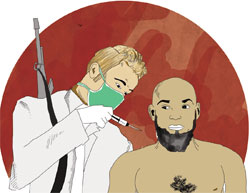 The headlines from Abbottabad confronted us with yet another example of a wider, worrying trend toward the exploitation of medical care to advance military operations. In October 2009, hundreds of women and children gathered for vaccinations in the province of North Kivu in Congo, came under fire in seven separate villages during attacks by the Congolese Army against the Forces Démocratiques de Libération du Rwanda. These attacks occurred just after MSF teams had received security guarantees from all parties involved in the conflict for a vaccination campaign in these areas, otherwise inaccessible to the national ministry of health. This use of medical aid as bait for military purposes shattered the trust of patients in health services, thereby causing more suffering to people confronted with violence and displacement.

In Bahrain, in April 2011, government forces used medical facilities to arrest and crack down on protesters, making those wounded during clashes too afraid to seek treatment. As the hospital became a military target, and the health system a tool for the security apparatus, patients could no longer realise their right to treatment in a safe environment, and medical staff could no longer fulfil their primary duty of providing healthcare regardless of patients’ political affiliations.

Such abuses of the medical act have breached the trust of patients who seek medical care but instead find themselves under attack.

The US government’s alleged misuse of a vaccination campaign in Pakistan for counter-terrorism purposes constitutes a dangerous precedent, which threatens the trust essential for health agencies and humanitarian aid workers to provide lifesaving medical services.

It also endangers those who provide legitimate and essential health services. The act violates medical ethics, which require acting solely on the needs of patients and doing no harm.

Vulnerable communities—anywhere—needing access to essential health services will understandably question the true motivation of medical workers and humanitarian aid. The potential consequence is that even basic healthcare does not reach those who need it most.