The Centre has promised more money to panchayats, but there is many a slip between cup and lip 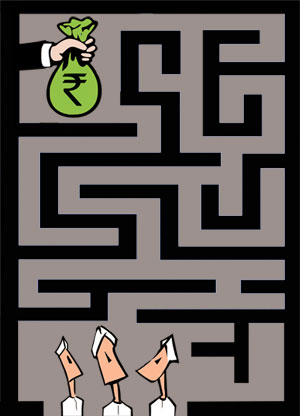 Like last year, the budget for the financial year 2016-17 also had a much-desirable provision. Last year, the government had increased the share of states in the Central divisible pool by 10 per cent after accepting the recommendations of the 14th Finance Commission. This year, the government has accepted another big recommendation of sharing nearly Rs 2,87,000 crore with India’s local governments like village panchayats, municipalities and other urban local bodies in the next five years. The transfers in the year 2016-17 will be Rs 29,988 crore.

This jump in fiscal share, reportedly 228 per cent more than that of the last five years, will come as a big respite for local bodies that hardly generate their own revenue. But at the same time, they have 29 functions to perform, starting from street lighting to maintaining community charnel grounds to making provision for water and sewage. According to the Finance Commission’s recommendations, 90 per cent of this money will be as grant and 10 per cent will be based on the performance of local bodies on various indicators.

It is popularly said that the real test of decentralised governance is fiscal devolution. India’s local bodies have already been given significant functions and to some extent, control over functionaries. But the most critical fiscal autonomy or the fund to implement these constitutional duties is still elusive. The new devolution will fix this shortcoming.

Here a warning is due. No doubt, the enhanced monetary help will empower the local bodies. But without an effective and verifiable mechanism to transfer this money to local bodies from the states, the good intent will not translate into desired results. It might backfire on the local bodies. If local bodies perform badly due to erratic money transfer, both state and Central governments, usually not so large-hearted about devolution to local bodies, would use this as an excuse to curtail power of the third tier of government.

Till date, sending money to the panchayats has been a problematic exercise. First, nobody is sure whether the states actually share the earmarked money with the panchayats. Secondly, the local bodies don’t have the capacity to keep track of the fund flow. This makes fiscal devolution a highly complex and dubious exercise.

The biggest problem with local bodies is fundamental: they still don’t have proper accounting records that can show how and how much money was sent to them and spent on what. On an average, a village panchayat head has to keep no less than 30 accounts. States also lack the capacity to take their auditable procedure to the village level. Usually, they keep track of the money till the district level. There have been many high-level discussions and committees on this. While officially, almost all states should have a verifiable accounting system by this time, it is no secret that not all states have been able to keep accounts of panchayats.

From April this year, money will start flowing to the states to be given to the local bodies. While setting up a robust system is vital now, there are a few checks and balances that can at least ensure short-term transparency in fund flow. For example, states usually deduct many pending dues like electricity bills before giving the money to panchayats. It may be logical but creates confusion in accounting. Similarly, a condition can be applied on states to put in place a direct fund flow mechanism that can be tracked and audited.

The condition of performance for transferring 10 per cent of the money to the panchayats is desirable. But a similar condition on states for transparent fiscal devolution is more desirable.