While overall employment declined in the country in 2020-21, compared to 2019-20, some sections have been affected more adversely than others

In this bulletin, we revisit the issue and look at monthly employment data from CMIE by sector, gender, occupation, and age groups between January 2019 and July 2021.

Figure 1 shows the MoM changes in employment by rural-urban sector. In April 2020, we had seen a sharp decline in employment numbers in both rural and urban India. While more than 40 million people lost jobs in urban India in April 2020, the number in rural India was worse, at more than 73 million. In rural India the decline had started in February 2020 (before the pandemic). After the sharp drop in the first month of the lockdown in April 2020, as the economy unlocked, the next three months (May-July 2020) saw a recovery in the numbers of employed people in both rural and urban India.

2021 saw the more devastating second wave of Covid-19 in the country but it did not lead to loss of jobs by the same magnitude as the first wave, most likely because the second wave was not accompanied by a strict shutdown of economic activity. In the months of April and May 2021, 10.10 million people lost jobs in urban India while 12.58 million lost jobs in rural India. However, the months of June and July 2021 saw a full recovery in employed numbers to bring them back to pre-April 2021 levels. Comparing average monthly employment in 2019-20 and 2020-21 in rural and urban India, we find that rural India employed 5.5 percent fewer people in 2020-21 over the previous year while urban India employed 8.4 percent fewer people. 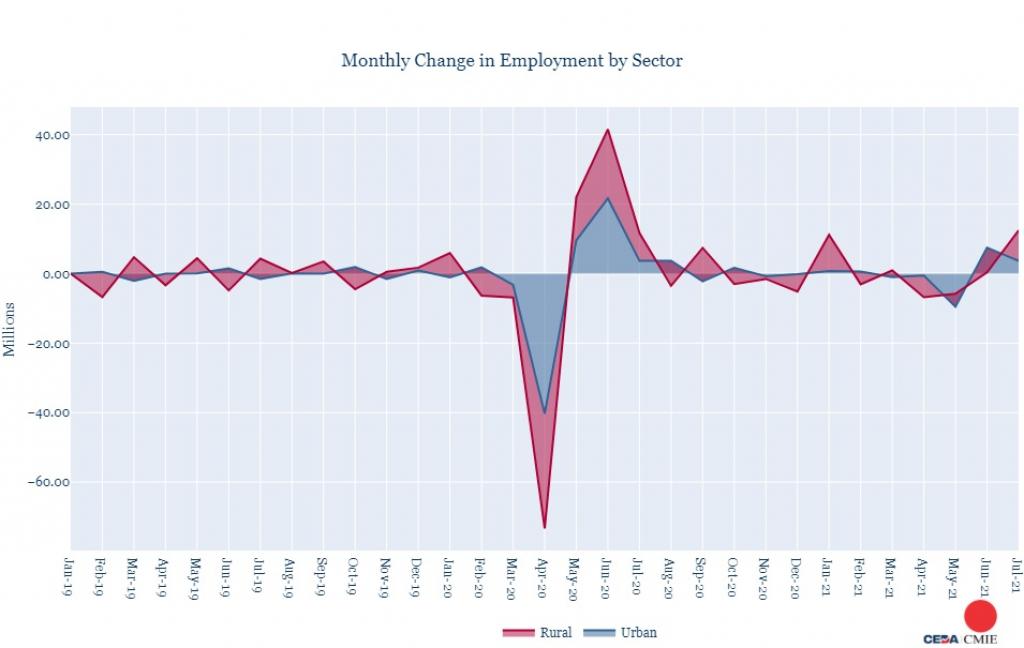 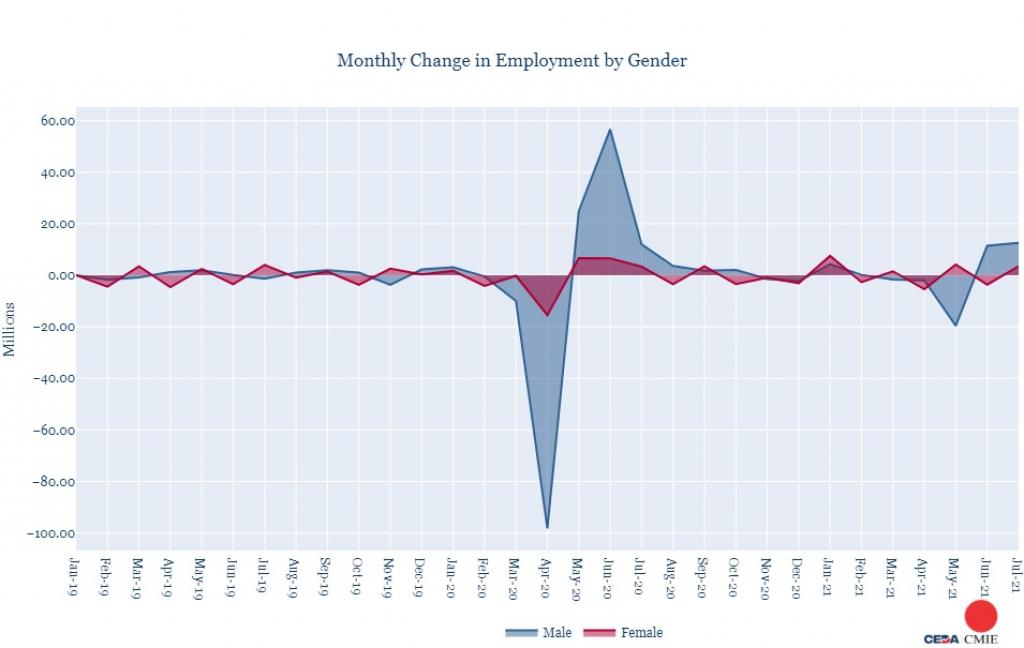 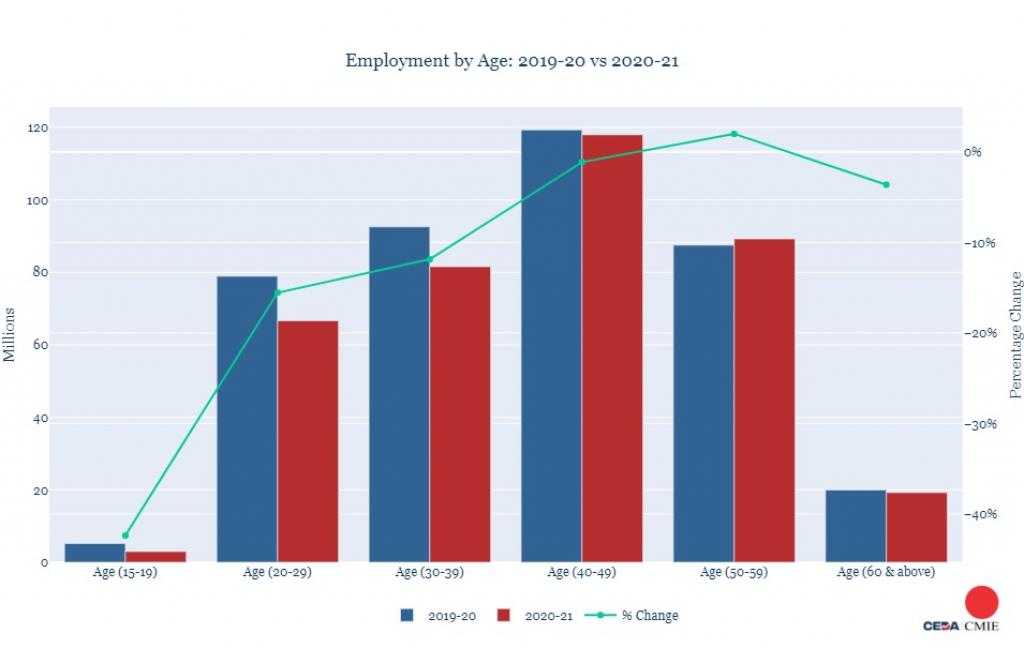 Unemployed but actively looking for jobs

Figure 4 takes the findings of Figure 3 further. It looks at the number of those who are unemployed and actively looking for jobs by age-group. The average number of those who were unemployed but actively looking for jobs (UEWL) in India in 2019-20 was 33.33 million. It increased by 23 percent to 41.11 million in 2020-21. While urban India saw an increase of 15 percent (12.33 million in 2019-20 to 14.16 million in 2020-21), rural India saw a jump of 28 percent (21 million in 2019-20 to 26.96 million in 2020-21). We see a surprising trend here as the percentage change in numbers of unemployed actively looking for jobs is higher among the older age groups. While the younger age groups suffered more in terms of job losses (in percentage terms as seen in Figure 3), it did not see a commensurate increase in the UEWL (Unemployed but actively looking for jobs) numbers. So, while 20-29-year-olds saw their average employment go down by 15.6 percent in 2020-21, the number of UEWL for 20-29-year-olds did not go up but actually declined by 3 percent. This could be the result of the discouraged worker effect. Discouraged worker effect is defined as, “the decision to refrain from job search as a result of poor chances on the labour market”. In another surprising trend, old workforce had a significantly higher percentage of people who were unemployed and actively looking for jobs. The 50-59-year-old age group saw its UEWL numbers swell up by 742 percent in 2020-21 while 60 or more-year-olds saw their UEWL numbers go up by 505 percent. A possible reason for this could be older members of the workforce looking for jobs while the young are unable to find jobs of good quality. However, conclusions ought to be tempered by the fact that in absolute number terms 20-29-year-olds make up for 61 percent of all UEWL numbers. 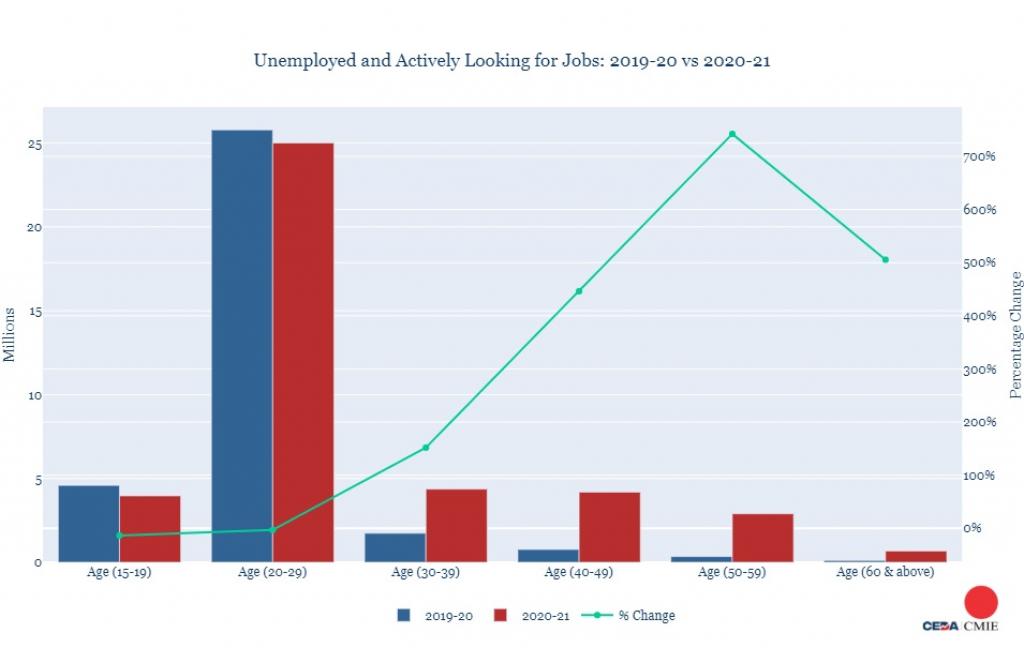 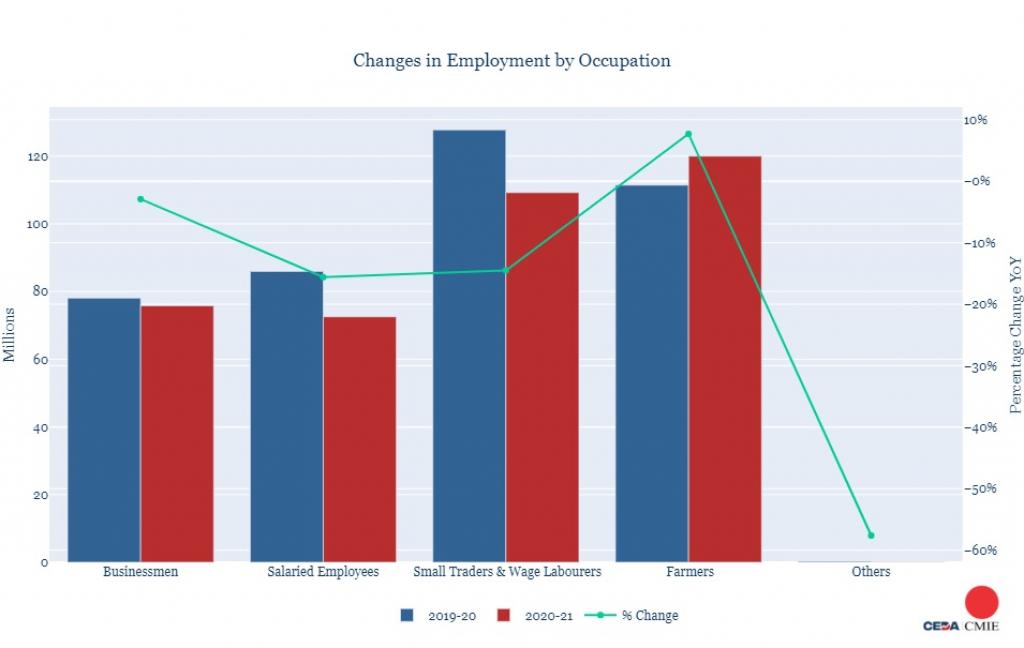 The second wave of Covid-19 in the country saw fewer job losses as compared to the first wave despite causing more infections and deaths possibly because no strict national lockdown was imposed during the second wave. CMIE data reveals that urban India employed 8.4 percent fewer people on average in 2020-21 than it did in 2019-20 while rural India employed 5.5 percent fewer people in 2020-21 over 2019-20.  We see that while men lost more jobs in 2020-21 over 2019-20 in absolute terms, women lost more in terms of percentage terms. Thus, women’s share in the workforce was reduced from 10.66 percent in 2019-20 to 10.19 percent in 2020-21. A look at changes in employment by age group shows that younger workforce (age groups 15-19 and 20-29-year-olds) lost more jobs in percentage terms than older age groups. Those above 40 years of age suffered only a 0.15 percent decline in average employment in 2020-21 over 2019-20.

CMIE data enables us to examine the age-wise break-up of those who are unemployed but actively looking (UEWL) for jobs and the surprising trend we discover is that while 15-19-year-olds and 20-29-year-olds suffer higher job losses in percentage terms, there isn’t a commensurate increase in their UEWL numbers. Thus, the UEWL numbers for the older age groups (50 and above) rise very sharply.

Looking at changes in employment by occupation tells us that all occupations except farming saw their average employment numbers decline in 2020-21 as compared to 2019-20 with the sharpest fall seen salaried employees followed by small traders and wage laborers.

In conclusion, we note that overall employment has declined in the country in 2020-21, compared to 2019-20, but some sections have been affected more adversely than others. Young people, women, salaried employees, small traders and wage laborers have suffered more job losses, and many have fallen back on farming as an occupation leading to a rise in its employment numbers.

This article was originally published by CEDA