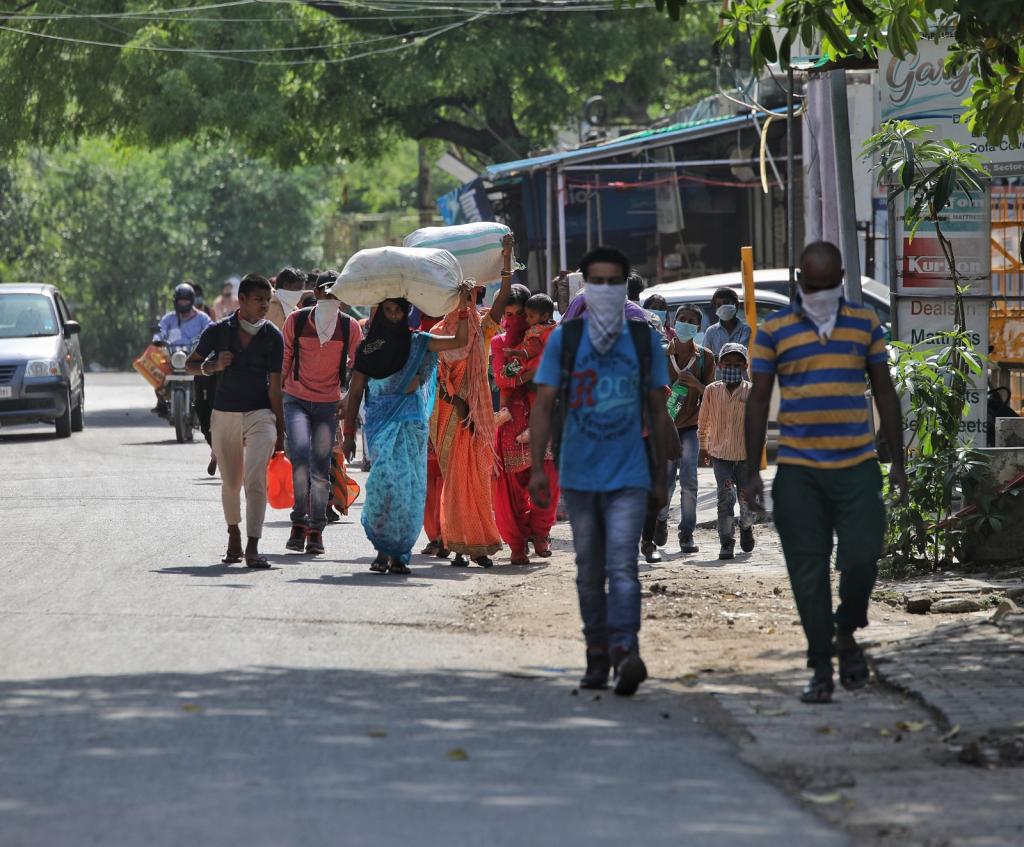 Well Jo'anna she runs a country
…She makes a few of her people happy, oh
She don't care about the rest at all
[Gimme Hope, Jo'Anna; Eddie Grant, 1988]

The Supreme Court June 29, 2021 directed all states to distribute dry ration under the One Nation One Ration Card scheme under the National Food Security Act (NFSA) and run community kitchens for migrant workers. It directed the Government of India to provide food grains needed to implement this.

to undertake exercise under Section 9 of the National Food Security Act, 2013 to re-determine the total number of persons to be covered under Rural and Urban areas of the State, which shall be beneficial to a large number of persons.

The order recognises that more than a quarter of the country’s population are migrant workers whose contribution to the economy is significant, though they may often be employed in precarious jobs.

The order also recognises that most workers in the unorganised sector are not able to access numerous welfare schemes due to problems regarding registration on the database of the Union Ministry of Labour and Employment.

The top court directed all states to make every effort to register workers under the Inter-state Migrant Workmen Act, 1979 (IMWA), the Building and Other Construction Workers Act, 1996 and the Unorganised Sector Social Security Act, 2008; it appealed to all intermediaries and contractors to do their duty in registering workers under these laws.

The Bench of judges Ashok Bhushan and MR Shah made it clear that states should not insist on identity cards for migrant workers; dry ration must be provided based on their self-declarations.

It also directed the states to provide transport for stranded migrants and run community kitchens to provide cooked food for migrant workers and their families.

Who is a migrant?

That is the basic question this judgement fails to address: The Supreme Court does not offer a definition of migrants beyond the one provided in the 1979 legislation, which keeps out most of the migrants that the court refers to in the order. 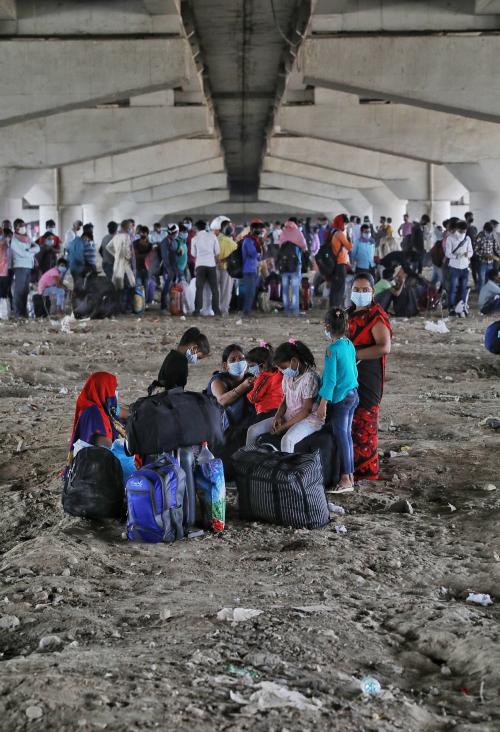 Most workers in urban centres are migrants; most do not come to cities through contractors nor do they have formal jobs. The largest numbers of migrant workers, thus, remain outside the realm of this judgement.

Employers challenged this order. To their relief, the Supreme Court in its 12 June, 2020 order directed employers who are willing to negotiate terms and enter into agreements with workers regarding payment of these wages till 18 May, 2020.

The Supreme Court judgment makes no mention of the large number of job losses at all levels that led to this crisis. It also makes no mention of the flagrant violation of the government order of 29 March, 2020 under the national Disaster Management Act to all employers to pay wages for the period of the lockdown and to refrain from firing their employees — including contract, temporary and casual workers.

In effect, the court validated the violation by employers of the government order with respect to payment of wages during the pandemic. It also restricted the period for the order till 18 May, 2020 even though the pandemic was far from over.

The apex court, further, ignored that the order was challenged and has not been heard since. It has made no effort to ensure that the Government of India responds to this appeal. Thus the judiciary and the Executive together ensured that employers got away scot-free.

The top court directed the states to provide dry ration to migrants “as per the Centre and states’ schemes”. The NFSA, unlike the Mahatma Gandhi National Rural Employment Guarantee Act, does not legally guarantee any right. It simply directs the relevant government to frame schemes to provide food security for citizens of this country.

The difference, therefore, is that if a person does not receive ration under the NFSA, there is no legal remedy. The provision under the NFSA is a targeted provision as opposed to universal, which leads to exclusion. More importantly, the provision of food grains under NFSA is subject to their availability and budgetary provisions.

The Supreme Court thus cleverly shifts the battle from the realm of protection of ‘rights’ of workers to their wages that they are legally entitled to — which brings a sense of dignity of work and genuine acknowledgement of their contribution to the economy — to the realm of government largesse; where dignity is lost and workers are reduced to the ‘poor’ who need state support.

This serves two critical purposes: one, employers are relieved from their responsibility towards their workers; and two, government becomes the saviour of the ‘poor’ and begins to distribute basic food material that the people are anyway entitled to as their citizenship right.

Further, the order restricts the provision of food ration to beneficiaries of the National Food Security Act (NFSA) and not to all, as it claims. Thus those excluded from the NFSA would continue to remain deprived even after the court order.

For those who are included, dry ration under the NFSA only provides basic food grains — 35 kilogramme rice, wheat and other coarse grains per family per month — which is nowhere close to providing a balanced meal for a family that is out of work.

The court also fails to recognise that it had taken upon itself the responsibility of such workers who through their working lives earn such low wages that leave them no capacity to save. The notion that a daily wage worker is just as much human as any officer of a court of law with a sense of dignity, deserving of a decent meal, with needs beyond just rice and rotis, seems alien.

The premise is that a daily wage worker must be grateful to the government that she is being given 35 kg food grains for her family to survive. What more does she need? What makes her think she deserves more, when she is not working?

The codes are yet to be implemented; but the Supreme Court — through the past four decades, since the enactment of the first of these laws — has made no effort to ensure the implementation of these laws, especially the migrant workers’ act.

The IMWA has never been implemented in reality due to lack of political will. It requires contractors to be responsible for the migrant workers they bring from different parts of the country into a job. In the contract system of employment, the contractor makes his money by squeezing the workers they provide jobs to.

The notion of a contractor paying workers for housing, travel and leaves is absurd, given the nature of the labour market; asking states to implement this law at a time when unemployment is at its peak, is ridiculous.

Finally, migrant workers can access One Nation One Ration or for the benefits under the three labour laws through digital portals; they require to possess Aadhar numbers, mobile phones (to receive messages) and bank accounts.

These digital portals are:

These act as huge barriers for most workers in need of these basic provisions of these schemes. This therefore gives rise to agencies and intermediaries who exploit the workers’ desperation in order to make money. Workers earning lower-than-minimum wage, living in various slums in Delhi, claim to have spent from Rs 1,000 to over Rs 2,000 to such local intermediaries to simply apply for a construction workers’ welfare board card. The situation is no different across the country.

Where lies the problem?

The Supreme Court order on the migrant crisis is not a thought-out reaction to a visibly distressing crisis. The easy solution to it is to direct the government to provide relief to the distressed persons while letting employers go and move on. That is what we got.

It is not, however, difficult to understand that the root cause of the distress is the persistent under-investment in rural areas; it pushes people into urban centres, at the disposal of big capital. This perpetuates a cycle of inequality, both economic and social, that suppresses wages and labour cost.

The pandemic provided employers with a brilliant opportunity to create more unemployed and thereby pushing desperation to a new level among workers. This desperation lowers wages, pushes workers to slog harder, hence increasing profits; most importantly, it suppresses protests.

Even the government used this moment of desperation of workers to conveniently pass all the three labour codes with no significant protests that took away a large number of gains that the working class movement had made over the last hundred years.

The crisis that we face today is that of unemployment, under-employment and below-subsistence wages, which needs political will to create jobs across the country — jobs that are secure and safe, jobs that can provide for a decent life.

This was first published in the Workers Connect.