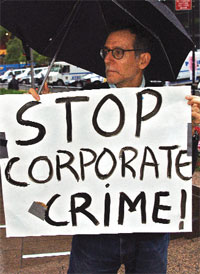 What started as the Occupy Wall Street (OWS) picket in New York at the world’s financial hub has spread across the world, with sit-ins by young people across 900 cities in some 80 countries. That’s an astonishing spread and it is surprising that so little of the OWS movement has been reported in our media—as in the American mainstream newspapers. The people who claim to represent the 99 per cent left out of the system are not getting even one per cent of the attention they deserve.

But, perhaps, not so surprising given that India’s mainstream media, too, is also controlled by the very forces that the world’s young people are challenging. In any case, most of the influential editors in this country are votaries of the capitalist system that is being questioned at these extraordinary demonstrations by angry young people who have been marginalised in a deeply scarring way. It is rage, rage and outrage against a system that has left out the poor and deserving (placards say “We are the 99%”) and allowed the elite to make more money through tax breaks, specially bankers and hugely profit-making corporations.

Is it primarily capitalism that’s under attack? Basically, the people who are camping at Wall Street and other symbolic spots across the world, such as the European Central Bank in Frankfurt, are protesting the economic injustice that has become the way of life in the developed world. It is about a system that has failed them, leaving them unemployed, homeless and hungry in many cases. The most evocative of the protests is by Los Indignados (The Outraged) in Spain where half a million people, most of them the jobless young, were out on the streets on October 15 seeking a more just and humane society. The indignados have been protesting since the middle of May and it was they who served as the inspiration for OWS. In an interesting interplay of global synergy, the Spaniards say they have drawn new strength and energy from the ongoing OWS protest at Zuccotti Park which is more than a month old!

What is encouraging is that despite attempts by conservative commentators and influential journals to dismiss OWS as an incoherent, confused and misplaced protest because it is against too many things—from war (the brazen invasions of Iraq, Afghanistan and now Libya by NATO powers) to demands to shut down Wal-Mart—there is grudging admission that the underlying causes cannot be ignored. The Economist, that pillar of conservative free market policies, concedes that it is dangerous to dismiss the broader rage that exists across the West. “There are legitimate deep-seated grievances. Young people—and not just those on the streets—are likely to face higher taxes, less generous benefits and longer working lives than their parents. More immediately, houses are expensive, credit hard to get and jobs scarce—not just in old manufacturing industries but in the ritzier services that attract increasingly debt-laden graduates.”

Although the overwhelming theme is dissatisfaction about the state of the economy and about the unfair burden that the poor are carrying as a result of the excesses of rich bankers that led to the 2008 collapse of Western economies, some commentators see in OWS a moral movement to reform democracy. To George Lakoff, distinguished professor of cognitive science and linguistics at University of California at Berkeley, it appears that “OWS has a progressive moral vision and view of democracy, and that what it is protesting is the disastrous effects that have come from operating with a conservative moral, economic and political worldview. I see OWS as primarily a moral movement, seeking economic and political changes to carry out that moral movement—whatever those particular changes might be.”

One of the dangers is that the entire movement, chaotic and confused as it may be, could be branded a leftist uprising—such insinuations have been made—and thus push it into a political cul de sac. In a sense though, OWS is the result of a brilliant and successful “class war” waged by big business and its allies against ordinary Americans. While the richest Americans won mammoth tax cuts (from 91 per cent in the 1960s to the current 35 per cent), middle class America got no such breaks while having to pay a higher proportion of their income for social security.

India is following a similar trajectory. Its budgets have turned increasing pro-business with six successive budgets since 2005-06, writing off corporate income tax amounting to Rs 3,74,937 crore. In the current budget it was Rs 88,263 crore. So far there has been no focus on this aspect in a country where a million mutinies over daily injustices have left little time for such analysis. The outrage of the 99 per cent is spreading though.