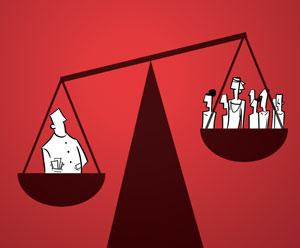 As the world observes the 25th year of the call to end poverty, a recent report on the level of hunger in India does not bode well for the global efforts to “eradicate poverty”. India shows two disturbing signs: poverty level has significantly reduced in this country that hosts the largest number of poor, but certain sections of the poor are getting poorer.

Which are these sections of the population? Expectedly, they are the country’s socially backward and marginalised communities. As this column has repeatedly warned, these communities are increasingly being trapped in chronic poverty. And their social status, which invariably dictates the level of poverty, compromises their capacity to move out of the trap.

This is despite the fact that in 1992, the UN in a resolution gave the call to eradicate poverty from across the world and declared October 17 as the International Day for the Eradication of Poverty. Some 20 years before this call, late Prime Minister Indira Gandhi had made the profound “Garibi Hatao” declaration, aptly from the country’s symbol of poverty—the Kalahandi district of Odisha. In both the cases, the targets were the socially marginalised communities who constituted the bulk of the poor at that point of time. In recent months, India’s first post-Independence born Prime Minister Narendra Modi repeated the slogan, though with a few tweaks.

What have we achieved in the 45 years since Gandhi’s call, and in the 25 years since the UN’s global call? Have the socially backward and marginalised communities witnessed a similar dip in their level of poverty? A big No.

The World Bank recently made partial disclosure of an upcoming report on reasons for poverty and why certain people never move out of it. “The social status of one’s parents is as influential today as it was 50 years ago in determining a person’s future,” say the report’s initial findings. It also points out lack of progress “since the 1960s in an area that is crucial for reducing poverty and inequality and promoting growth”. The report has gone into details of how access to education would decide escape from poverty and make development inclusive or not conditional to a child’s parents’ social and economical status. According to this report, only 50 per cent of children born in the 1980s have more education than their parents. This is no different from the 1960s level If the world does not alter the way it invests in its children, particularly those coming from less advantaged backgrounds, there is little reason to believe that this assessment will be different 10 years from now. Making an end to extreme poverty by 2030 is an even bigger challenge, the assessment says. This is an alarm call for India to take immediate action and change the way it has approached poverty so far.

India’s socially backward communities account for close to 80 per cent of the country’s total poor population. These communities account for a similar percentage of child population. Half of India’s children are poor or must have been born in poor families. This means, in a way, we are already into the process of making poverty generational. This is the reason the child of a poor family has high probability of remaining poor forever. It is not just educational status that matters. The World Bank report has also identified that the overall lack of development and health status of children are conditional to their parents’ social status.

The immediate call of action is to stop making poverty as the all-weather political tool. Since Gandhi’s call, as it emerges, we might have reduced poverty numerically, but couldn’t treat it for the section of people who remain at the margins of society.

Instead of making caste-based politics, it is time we made caste-based economic development a much bigger national agenda. This is because speaking of development is a secular activity, but poverty is not.