The sheer folly of Indian GIs 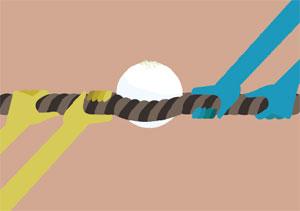 When bengal Chief Minister Mamata Banerjee heard the news, she was so delighted that she immediately tweeted: “Sweet news for us all. We are very happy and proud that Bengal has been granted GI status for rosogolla.” You would think the CM had won a political battle instead of a special trademark for a sweet beloved of Bengalis.

But that’s what GI or geographical indication tags have become in India, where states are racing against each other to pile up an ever-increasing mound of products that enjoy this special form of intellectual property protection based on geography and the special qualities derived from a location. When the West Bengal State Food Processing and Horticulture Development Corporation Limited (WSFPHDCL) was awarded the GI in November 2017 for Banglar rosogolla it appeared to have stolen a march over Odisha which had sought the GI tag for the spongy sweet, claiming that its tradition was centuries older than the Bengal version. Thus, we had the comedy of Odisha CM Naveen Patnaik posting a counter tweet pushing the claim of the Odishara rosogolla, which he said was being offered to the Puri temple since the 12th century! Odisha may well get its own GI tag since the name is different.

GIs were pushed at the World Trade Organization (WTO) by the European Union which wanted their high-end niche products like champagne from the Champagne region of France, Scotch from Scotland, etc., to enjoy a special monopoly in international trade since these products bring in sizeable export revenues.

As such it made sense to register our own specialities such as Basmati rice and Darjeeling tea which enjoy a similar status on the world market. Unfortunately, GIs were promoted rather rashly by India’s Patent Office and the result is that state organisations have lapped up the idea enthusiastically as a game of one-upmanship. Ignoring the rationale for GI, these official bodies have for the most part chased this tag without any logic or cost-benefit analysis. On its part, the GI Registry has been equally careless in handing out the appellation often in clear contravention of the law. It has blithely overlooked the requirement that products need to prove their geographical uniqueness and that the GI is meant to be a community-shared benefit not available to individuals or business enterprises.

What is patently silly is that so much time, (public) money and effort is being expended for GI on products that are ubiquitous and clearly don’t draw their special qualities from their geographical location. It is hard to make a case that the rosogolla is unique to Bengal when every nook and corner shop across the country that calls itself a Bengali sweet house is selling the same stuff. More pertinently, why was the GI given to WSFPHDCL for the Banglar rosogolla? The organisation is neither involved in the manufacture or marketing of rosogollas and does not represent the community of sweet-makers as indefensible as the GI given to the Tirupati Venkateswara temple for its laddoos (see ªGod’s Invincible Laddooº, Down To Earth, 16-31 August, 2012).

India’s GI Act lays down that only an “association of persons or producers or any organisation or authority established by or under any law for the time being in force representing the interest of the producers of the concerned goods” can file an application for registering a GI. This column has inveighed repeatedly against the reckless manner in which GI is being awarded in cases where a trademark was all that was required.

However, where a GI did matter, and most significantly, as in the case of Basmati, the registry took all of eight years to grant the tag although the special long-grained aromatic rice is a major exchange earner and was facing a host of global competitors. Since the GI registry does not appear to have imbibed the spirit and letter of the law, expect more indiscretions.