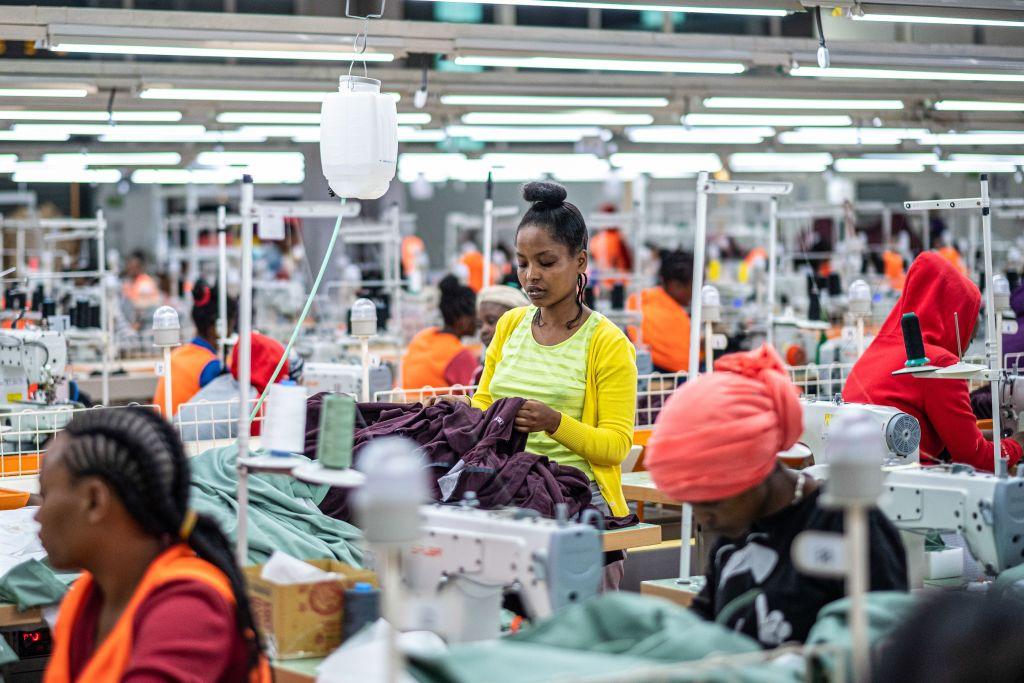 Ethiopian women at a garment factory at the Hawassa Industrial Park in the country’s southern region. Photo: Eyerusalem Jiregna / AFP via Getty Images

Until the war in Tigray started in November 2020, Ethiopia was a favoured investment destination. It had experienced strong economic growth for the previous decade.

The country gave foreign investors preferential access to American and European markets, favourable customs and tax policies, and relative political stability. Labour costs were also low — around half of what they were in China.

The Ethiopian government had invested $1 billion annually in industrial parks since 2010 — almost one-third of its total net foreign aid.

Investors from across the world, including China, India, the US and South Korea, started industrial production in these parks, creating job opportunities for thousands of citizens.

And most of them were women who entered the labour force as never before. Before the COVID-19 crisis in 2020, firms in the new industrial parks in Ethiopia employed about 86,000 workers — around 80 per cent of them women. They were hired for light manufacturing, making products like shoes, textiles and garments. Employers saw women as diligent and disciplined.

The entry of women into Ethiopia’s work force provided a rare opportunity to study the impact of jobs on women’s empowerment, especially participation in politics.

A study I conducted with colleagues yielded unexpected results that have implications for the understanding of political agency in a non-democratic and developing context.

Wage labour tends to boost the status of women. This influences their effectiveness in getting power in other realms of society, including politics. It also increases the number of women with professional experience and resources to mount credible campaigns and challenge negative voter attitudes towards women.

We wanted to know whether this trend would be the same in a developing country but also one as authoritarian as Ethiopia.

The 2020 Human Development Report shows that gender inequalities persist in Ethiopia, denying women the opportunity to participate in development projects. A lot more needs to be done to increase women’s empowerment in the country.

Starting in 2017, we collected data from 27 large factories that make shoes and garments across five industrial parks in Ethiopia. The firms agreed to randomly assign 1,498 applicant women to two groups. One group of women was offered jobs and a control group was not offered jobs.

This unique research design made it possible to compare groups and identify the impact of employment. We asked both groups of women the same questions to measure a variety of indicators of women’s empowerment. These questions were around economic decision making (bargaining power), their influence on number of children they would have, and their levels of political interest and participation.

The study followed up with participants at intervals of six, 12, 18 and 36 months after they had applied for the job. We combined this with extensive qualitative data and phone surveys conducted with women’s partners.

Our study investigated if women’s status as workers made them more interested in politics — and more likely to participate in politics — than women who did not work.

Contrary to expectations, our research found no evidence to suggest that the job offers had any positive effect on political participation. We saw no effect of employment on women’s bargaining power or gender equality norms. We even found a reduction in women’s participation in community meetings.

We see this as an outcome of female factory workers’ long working hours, poor working conditions and lack of labour rights. A gendered division of labour in factories, and the belittling and derogatory attitudes of factory owners and supervisors towards women, further limits their political agency.

In our interviews, women said they had no time to attend political meetings. They often had to work long hours to reach production targets. There was no minimum wage and attendance bonuses were lost on the first day of an absence.

Almost all women had experienced abusive behaviour from their supervisors. This included being shouted at, insulted or subjected to physical force to get them to work faster or as a punishment for mistakes.

The opportunity to unionise was nearly non-existent. Out of the 27 companies in our study, only two had labour unions. The investors and factory owners we interviewed expressed their resistance to such unions.

Government officials and representatives of the national labour union told us that labour laws were not enforced for fear of investors leaving the country. Most factories were in practice exempted from basic labour regulations. Even if inspectors uncovered health and security violations, for instance, they would be unlikely to take these cases to court.

Our findings correspond with studies of women’s political participation in other African autocracies, such as Rwanda and Uganda.

Income and job status have less of an impact on women in authoritarian contexts than in advanced democracies. Having an income and a job, especially if the job does not come with labour rights, doesn’t give an individual the kind of power it would in an advanced democracy.

The Ethiopian government and the investors creating employment have a long way to go to offer Ethiopian women what the International Labour Organisation terms decent work.

Our research shows that the main actors determining labour conditions in Ethiopian factories have little concern for the potential damage that poor working conditions can have on their reputations.

But recent developments may support a change. In 2021, Ethiopia’s preferential access to American markets through the African Growth and Opportunity Act was terminated. This has been a big blow for investors and the government. Investors have left the country.

Being more open to unionisation could have benefits for industries. Better working conditions might improve manufacturers’ image among western consumers. The Confederation of Ethiopian Labour Unions told us in research interviews that unionising would facilitate more peaceful industrial relations. It is already seeing progress in industrial parks.

If this leads to better working conditions for female factory workers, the country may see positive changes in women’s political interest and participation.