Today is the death anniversary of Anil Agarwal, the founder of Centre for Science and Environment and Down To Earth. He wrote this editorial on India’s energy policy 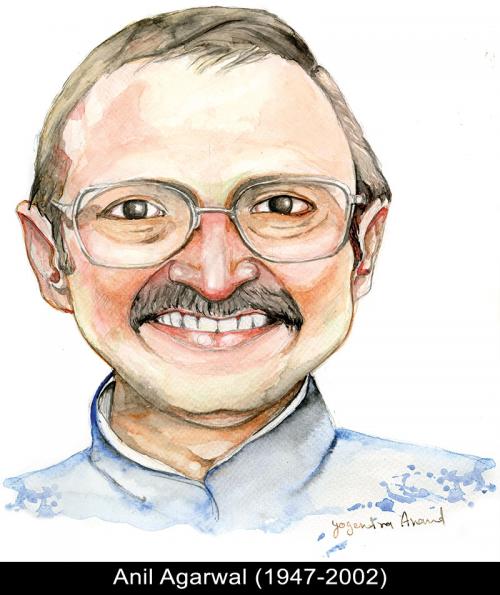 A few years ago, social activist Pramila Dandavate had asked me at the end of a talk whether the Indian environmental movement had a symbol similar to (Mahatma) Gandhiji’s charkha (spinning wheel) during the freedom struggle. My answer was, of course, no, as indeed there is none.

But I have since thought a lot about this. My first response was to say that the bicycle is the best symbol.

Only a transport system built around the bicycle would promote equity. The bicycle also keeps the rider fit and healthy.

So from all points of view it is a great symbol — except that it is not a product of Indian culture, like the charkha.

After a lot of thought, I now believe that gobar (cow dung) is the answer. The widespread and diverse use of gobar in Indian society stands up to every principle of good environmentalism.

Cow dung is a waste product. Yet, instead of being looked down upon, it is highly respected.

People touch it without hesitation. They even use this waste to plaster their mud houses to keep away, of all things, houseflies.

I have often wondered what prompted someone to use animal waste in such an imaginative manner, since the obvious reaction is to stay away from it.

But someone must have watched cow dung with great interest and noticed that it had certain qualities worth experimenting with.

This person was probably a woman, given the fact that women spend so much time taking care of cattle.

She was obviously a person inspired instinctively by the best principles of recycling. Cattle exist in plenty and so do cow dung. Can I make some use of it?

Of course, the greatest use of cow dung is in our farming systems. Indian soils have been exploited for millennia. Yet today they continue to be fecund.

To a great extent this is because Indians have practised not just farming but a combination of farming and animal care which give them access to large quantities of animal manure.

The use of cow dung in the villages of the Western Himalaya is absolutely remarkable even today. The soils of the mountain terraces are inherently poor. But they have to be cultivated year after year.

They remain fertile only because the villagers keep a lot of cattle, more for cow dung than milk, spend hours going to the forest to collect leaves and grasses to feed them, then collect hundreds of tonnes of cow dung from cattle sheds and carry it to the fields to manure them.

All those pictures of women carrying loads of firewood have been described as symbolic of an energy crisis. But this is a total misunderstanding of the real situation.

Every Himalayan woman has tonnes of cow dung at home which she can potentially use as fuel. But she will never do so. She will instead spend hours going to the forest to collect firewood but keep every dung dropping for her fields.

Unfortunately, women in many other parts of India have no forest to turn to. They can only burn cow dung. As a result, millions of tonnes get burnt every year as cooking fuel. For Bharat, cow dung is more important than electricity, coal or petroleum.

Years ago, while addressing the Parliamentary Consultative Committee of the Ministry of Energy, minister Sushila Rohatgi asked me what I thought was wrong with India’s energy policy. Its management, I answered.

The least important energy source, atomic energy, is looked after by the most important minister, namely, the prime minister. Next in order of importance are electricity, coal and petroleum. All have separate departments and ministers.

But the most important energy sources, firewood, cow dung and agricultural residues, have none. So, I explained to Sushilaji, India’s energy system needs a Gobar Mantri (cow-dung minister).

I had no hesitation in saying this especially after having shown the Members of Parliament slides of how people in Gujarat and Rajasthan put a stone or a stick on every cowpat lying on common lands to lay private claim on it.

I, therefore, can't think of an example which symbolises the spirit of environmentalism more than gobar.

Do you agree with me that a cow dung mound best symbolises India’s environmentalism, or have I got my head too much in dung?

(Anil Agarwal was the founder of Centre for Science and Environment and Down To Earth, and wrote this editorial for the 16-31 August, 1995 edition of the magazine)