Medium and heavy commercial vehicles consume 42 per cent of India's oil. Replacing them with electric vehicles will have multiple benefits

India is fighting a constant battle against air pollution as it depends mostly on non-renewable sources of energy, particularly, oil. The falling prices of the commodity globally, have given us an window of opportunity to develop indigenous technical solutions more suitable to India—to reduce our usage of oil and move to cleaner energy.

India has around 199.9 million automobiles on its roads. While most of these (157.3 million) are two-wheelers, their oil usage is relatively low. On the other hand, there is a relatively small number (3.7 million) of Medium and heavy commercial vehicles (M&HCVs), which consume 42.16 per cent of the total fuel in the country.

Converting these M&HCVs as electric vehicles (EVs) will save 254 million litres of oil per day, benefiting India economically and reducing its carbon emissions. This will also benefit 65.72 per cent of the country’s population, who use these vehicles by reducing the cost of operation and usage in the long term. 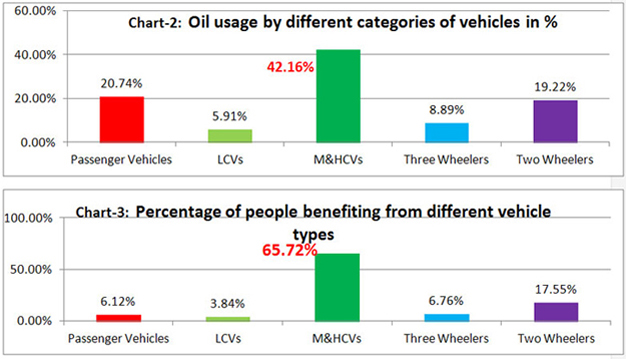 Chart-4 captures the crux of the entire discussion. Just 1.84 per cent of vehicles, the M&HCVs, burn about 42.16 per cent oil. Overwhelmingly, this relatively small number of M&HCVs serve 65.72 per cent of the country’s population each day.

How will India benefit?

Calculated at current oil price of $30 per barrel and $50-60 per barrel for the next ten years (cost increase as predicted by energy experts) M&HCVs would burn approximately $33.8 billion worth of oil, each year.

Instead of using this money to buy oil, it can be diverted to buying new EVs or converting old M&HCVs to EVs—2.1 million (manufactured in past 10 years) out of the total 3.7 million M&HCVs would have become EVs in the next 10 years.

Many factors such as inflation, technology, volume and battery technology influence the average cost of conversion or manufacture, hence, it is very difficult to estimate.  Even with higher error margin, keeping Rs 1 crore per vehicle as base price, and considering that all the existing M&HCVs become EVs in 10 years (and the old ones abandoned), India would save the entire foreign exchange in the future which, otherwise, for purchase of oil.

The solar mission can be coupled with electric-mobility mission. The idea is to gradually start using solar energy to charge batteries of these EVs. Around 3.7 million M&HCV-EVs will need approximately 2,000 million units of electricity every day. Instead of supplying the same from 80 Gigawatt of thermal plants, green energy from solar plants—total of 400 GW developed over the next 10 years—can be used. Yearly M&HCV-EVs fleet additions (at about 5 per cent of total) will need another 20 GW every year.

Do we have the technology?

The non-availability of EV technology for M&HCV segment can be given as a reason against this idea. However, India should look at this challenge as an opportunity to develop this technology at home and also provide it to other countries. Battery technology is the most crucial factor for this idea to work. India is blessed with this window of 10 years, to develop suitable technology like sodium, sulphur or aluminum (instead of Lithium) batteries.

"In-wheel motors" technology is very attractive for M&HCVs.  The peak of power and torque per wheel can be as high as 100 horse power and 1000 Newton-metre respectively! The wheels of the existing vehicles can be replaced with wheels having in-wheel motors; and when these wheels are powered and controlled by batteries and controllers—they become hybrid vehicles. That is, they can be used as EVs as well as they can still run on oil.

Achieving this goal will require an in-depth understanding of the problem. Science and technological know-how to generate a planned solution is also necessary. However, dedication from all stakeholders is the most important condition to achieve this mammoth task. Along with these factors, some other conditiona are also crucial.

India must develop its own technology and not seek support from other countries, creating opportunity for itself. The country should also stay put to the idea for as long as it takes to solve the problem. India needs to invest heavily in the idea of developing technology and using it on a large scale. Any idea or solution cannot be executed without financial backing. Some parts of the country have initiated a car-free day to raise awareness against air pollution from vehicles. This can be extended to a “fuel-free day” at the national level to involve people.