But is the world really on track to achieve this?

The International Renewable Energy Agency (IRENA) has released a new report named 'Future of Wind' in which it has suggested that wind energy could be the single largest source of power generation by mid-century.

The report says that wind has the capability of satiating one-third of global power needs and reducing a quarter of energy-related carbon emissions. This is possible if global wind energy installations upsurge over ten times at about 6,000 Gigawatt (GW) by 2050 from the 2018 level of 500 GW.

This entails advancement in certain key factors like economies of scale, more competitive supply chains and technological innovations alongwith an annual investment of over $300 billion in 2050 (from less than $100 billion in 2018). 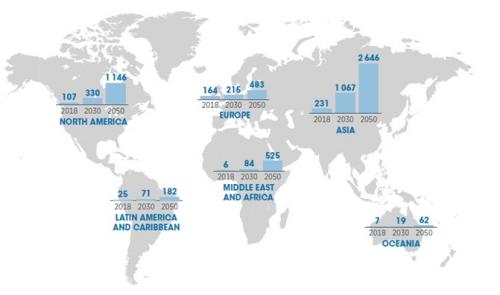 Irena’s projections seem inflated as these are close to accessed wind energy potential in countries which may not be practically and commercially realisable. The International Energy Agency, in its China Wind Energy Development Roadmap 2050 published in 2011, forecasted wind power capacity in China reaching only 1,000 GW by 2050. For India, the National Institute for Wind Energy has estimated wind power potential as 302 GW (at 100 metres).

At present, the wind industry is facing headwinds in both countries as projects are hobbled with issues of land and network availability. Developers are also struggling with rampant network congestion and curtailment of generation.

China has the highest wind capacity in the world. It added about 21 GW of additional wind energy capacity in 2018, taking its cumulative wind portfolio over 180 GW. China is investing in improving and adding grid infrastructure which has resulted in the curtailment coming down from 12 per cent in 2017 to seven per cent in 2018.

The wind industry is currently backed by the government with subsidies, which it is planning to take away in 2021. This is a major policy intervention which may prove disruptive.

It will affect the sector’s market competitiveness. Under the changing dynamics, China will require a more systematic approach for speeding up construction and development of projects to achieve aggressive goals set up by Irena.

In India, cumulative wind installations stand at about 37 GW. But the sector is losing its role and fraction in the renewable energy portfolio with a negative installation growth rate in the last two-three years. Delhi-based non-profit Centre for Science and Environment (CSE), in its State of Renewable Energy in India report, analysed the reasons affecting the wind industry.

The sector has been under stress.

This is due to a combination of reasons. There are ill-conceived policies such as reverse auction and bidding, untimely withdrawal of support mechanism.

Besides, states’ enticement for lowest-possible tariffs leading to frequent cancellations of the auctions and their blatant disregard for signed and committed power purchase agreements, risking the fate of already installed projects add to the mix.

The report pre-empts that the financial issues faced by distribution companies will pose a significant threat too. Offshore wind projects have not seen any activity so far. The wind energy sector in India stands at crossroads today and it necessitates to re-examine the on-ground facts.

The old way of business (policy preference) is not relevant anymore and these countries are trying new ways (competitive bidding in India, reduction of curtailment in China etc). But these have yet to pick up momentum.

A series of concerted efforts are required to be implemented by governments as well as other stakeholders if the targets suggested by Irena are to be met. Definitely, wind has to play an important role in the world's energy transition and requires a competitive, cost-conscious growth.

Strong goals have and will continue to play a crucial role in pushing wind energy growth in the world and effective policies and innovation will stimulate growth.