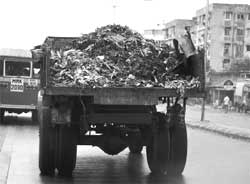 India's Green Revolution has left us with embarrassing mountains of undistributed agricultural surpluses and hectares of land with seriously depleted soil. Yet it need not be so. This can be solved with a fraction of the staggering sum now being spent to subsidise synthetic fertilisers that destroy India's soil fertility.

India's synthetic fertiliser subsidy bill for the year 1999-2000 comes to a whopping Rs 14,250 crore. Of this amount, Rs 8,750 crore has been spent on urea, Rs 4,500 crore on phosphorus and potassium ( p and k ) fertilisers, and a further Rs 1,000 crore on interest subsidy to big producers. Ironically, the installation of compost plants in cities -- a much cheaper option -- that can produce tonnes of organic manure daily, has not been considered by any state or Union government.

The Planning Commission has estimated that India has a shortfall of six million tonnes of organic manure a year, when millions of tonnes of potential organic manure are going waste in the form of the biodegradable component of city wastes, which are left to rot along highways and tank beds. That this goes against the recommendations made in the Municipal Solid Waste (Management & Handling) Rules 2000 as well as the report of the Supreme Court Committee for Solid Waste Management in Class 1 Cities in India, March 1999, which insist upon converting the waste to compost, makes it even more inexplicable why the practice has not been resorted to so far.

Our 300 major cities alone can generate 10 million tonnes of compost a year to comfortably serve their respective agricultural hinterlands. All that is needed is the political will to make it happen. Promoting the use of city composts along with fertilisers is vital for India as it protects the soil from the harmful effects of excessive use of urea.

Agronomists have been advocating integrated plant nutrient supply system (ipns), where there is a combined use of organic manure and synthetic fertilisers, for years. The organic manure needed for this can easily be met from composting city garbage. This will also clean up the city areas and stop open dumping. While the government pleads lack of funds for compost plants, only a fraction of the fertiliser subsidies is actually needed to fund them. And the payback on such investments, to the overall economy, would be manifold. It would benefit all taxpayers, by saving about Rs 1000 crore a year.

Most of the time the subsidies turn out to be an additional burden for farmers. The Hanumantha Rao Committee, appointed by the Union government in 1997, in its Fertiliser Pricing Policy Report recommended "discontinuance of the Retention-Price-cum-Subsidy (rps) for urea units" because "the unit-wise rps conceals inefficiencies which add to the burden of subsidy without benefiting the farmers." A White Paper on subsidy brought out the same year classified the fertiliser subsidy as "non-merit good" because the benefits were considered to be accruing largely to the producers rather than the farmers. ipns on the other hand benefits farmers and will also reduce our foreign exchange burden on importing fertilisers. A major bulk of phosphorus and all of potash are still imported. And the subsidies alone were Rs 4,500 crore last year, apart from the import cost.

City compost help to improve the soil condition, which is depleted due to the excessive use of fertilisers. Compost contains useful soil microbes and humus that aerates soil, and improves water retention and resistance to both drought and waterlogging, thereby reducing irrigation requirements. Compost can restore India's 21.7 million hectares of saline and alkaline soils. The increasing intensity of cultivation and inadequate and inappropriate application of fertilisers have extended the areas of low productivity due to depletion of nutrients. The economic loss due to this has amounted to billions, annually. City composts can also counter the galloping depletion of micro-nutrients in soil since heavy chemical-fertiliser use began. According to Fertiliser News, in 1950 only nitrogen was deficient in Indian soils, but by 1990 there are progressive soil nutrient deficiencies of eight elements (nitrogen, iron, phosphorus, zinc, potassium, sulphur, manganese and boron) and more deficiencies were expected in the next decade. City compost, derived from plant matter, that took up all these micro-nutrients while growing, is the ideal thing to restore these micro-nutrients in our soils.Heavy-metal levels will come down when compost is used along with chemical fertilisers, since single super-phosphate and rock phosphate, for example, contain twice as much lead and 9-15 times more cadmium than the standards now specified for city composts.

Pollution of water bodies is a serious problem caused by chemical fertilisers. Synthetic fertilisers pollute the groundwater with nitrates, as only 20-50 per cent of the fertiliser is absorbed by plants and the rest runs off into the water sources. The humus in city compost reduces this pollution by retaining nitrates for the use of plants and increases the uptake and efficiency of chemical fertilisers it is used with.

Organic manure invariably increases crop productivity compared to synthetic fertilisers. This has again been proved recently by the All-India Coordinated Research Project on dryland agriculture. University of Agricultural Science, Bangalore, as part of the project documented how in the 15 years between 1983 and 1997, five-year-average yields of plots receiving only synthetic fertiliser initially doubled, but have fallen to half later. In contrast, plots using only farmyard manure (fym) did 56 per cent better initially and rose to 100 per cent better yields over a time. Plots using fym along with synthetic fertiliser did the best, with yields immediately increasing 2.5 times and holding or improving that yield to 2.55 times in the long term. ipns also strengthens the root systems of plants and thus makes crops more pest-free.

It is important to remove the distortions in the current fertiliser subsidy in order to create market demand and make compost production financially viable. Providing a level playing-field for city compost along with synthetic fertilisers will generate enormous national savings which will then be available both for the cleaning of urban India and for the prosperity of its farmers. Producing, marketing and distributing 10 million tonnes of city compost, worth Rs 100 crore a year, as organic manure can hasten a long-overdue re-ordering of agricultural strategies to restore and maintain India's soil fertility. The national fertiliser pricing policy thus has a very direct bearing on the offtake of city compost, an aspect which is generally ignored.

Integrating 10 million tonnes of city compost a year by 2003 into the agriculture sector will require serious inter-disciplinary coordination. It calls for brief but focussed application of mind to integrate various interests and come up with a viable win-win mechanism for all, via the nationally-approved concept of Integrated Plant Nutrient Systems (ipns). A multidisciplinary task force of agronomists, agricultural economists, fertiliser and compost producers and users, and funding agencies, should be formed to evolve strategies and devise fiscal and market mechanisms for the production, distribution and using of compost along with chemical fertilisers as part of the government's commitment to promote ipns for sustainable agricultural growth and soil productivity.

Meanwhile, there is much that our autonomous bodies can begin doing immediately to further these objectives. For example, the Tobacco Board supplies urea on credit to its growers and deducts payment when buying their produce. They can simply supply matching quantities of compost on exactly the same basis, shipped directly from compost plants. Farmers would benefit in many ways: their soils would be spared the rapid depletion by such a fast-growing crop, their use of pesticides would come down, and their produce would be of better quality.