Environment as the enemy

We celebrate disruptive financial decisions as a sign of decisive leadership. So why not in the case of environmental emergencies? 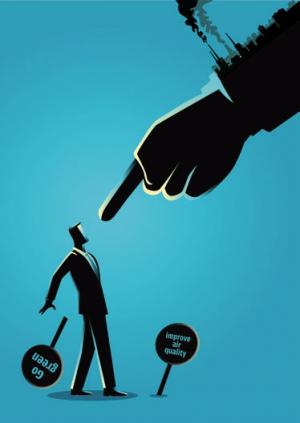 For 34 years, every election in Bhopal brings back memories of the intervening night of 3-4 December, 1984. The campaign for the General Elections was at its peak. Bhopal was cursed on this night by what is now known as the Bhopal gas tragedy or the world’s worst industrial disaster. The election campaigns went on and after a few weeks, the country celebrated the historic mandate of late Prime Minister Rajiv Gandhi. India witnessed two extremities: a political triumph and an environmental tragedy.

Just a few weeks before the 34th anniversary, the state was in the midst of electioneering to elect a new state government. But the concerns of the affected didn’t feature in the agenda of political parties in any of the three legislative constituencies, which account for most of the tragedy’s victims. The victims led a campaign: “No compensation, no votes.” Still, the popular mood was to give the tragedy a miss. Newspaper reports quoted people saying that since the industry was no longer functioning, the threat of a repeat of 1984 didn’t arise. For the half a million victims, this was like a judgment delivered by the majoritarian memory lapse.

Some 700 km away from Bhopal, Delhi, was witnessing its annual environmental disaster. Air pollution spiked from severe to emergency levels. Like the Bhopal tragedy anniversary, Delhi’s annual extreme air pollution phase is also witnessing a seasonal span of attention only to be forgotten later. The city has what is called the Graded Response Action Plan, which recommends a set of actions to be implemented depending on the levels of pollution. By mid-November, as the air quality dipped, there was the extreme recommendation of allowing only cars running on cleaner fuels like compressed natural gas on the roads. It was an extreme proposal for an extreme situation. But hell broke loose: from politicians, eminent people, advocates, experts to members of the media, everyone junked the extreme step.

Coming back to Bhopal. People and politicians are at least talking about “extreme” steps like demonetisation and the abrupt implementation of the Goods and Services Tax. There might not be general support, but the tone of debates and discussions is positive and the argument is that in the face of extreme situations we need extreme solutions. But the moment there is talk of an extreme situation like say the air pollution in Delhi or an industrial disaster, the discourse ends with an argument that criminally reflects our pathetic understanding of public interest: “These are one-off incidents, and environmental concerns can’t stop development”. That is the new polarisation: environment Vs development. In this polarisation our support and acceptance of disruptive steps/solutions is limited to “development”.

For example, stopping vehicles would bring “development” to a grinding halt in Delhi. Similarly, anticorruption campaigns never supported the environmental concerns raised by local communities whose lands and water were being taken away for private businesses. The moment the Supreme Court ordered the communities in Odisha to give a verdict on bauxite mining in Niyamgiri areas, the debate again was steered back to environmental concerns being a stumbling block for development. Mining in that mountain range would have killed many rivers which, in turn, would have impacted overall water security of towns and cities depending on them. Our definition of a decisive leadership has been reduced to taking decisive steps on a few issues, but not on critical environmental concerns that fundamentally define our existence

(This piece was first published in the December 1-15, 2018 issue of Down To Earth magazine under the headline "Environment as the enemy")