On a cold December morning, Khagendra Mandal led us to a portion of an embankment in Launiya village in Nepal’s Saptari District. Pointing to a spot overrun by weeds and fraying sandbags, he described how the people of Launiya rallied together on a rainy night in the monsoon of 2019 to stop the onslaught of the Khado River.

“We made two human chains of 15 metres each and laid down head to toe,” he recounts. While a few villagers laid on the breached portion of the embankment to stop flood water from entering the village, others had rushed to get sandbags and raise the alarm.

“Had we failed to come together in time, we would have lost everything,” he says.

Launiya is among a number of villages at Tilathi Koiladi Rural Municipality (TKRM) in Nepal’s Terai region which is regularly affected by flash floods from the Khado river. Flooding also affects downstream communities in India. 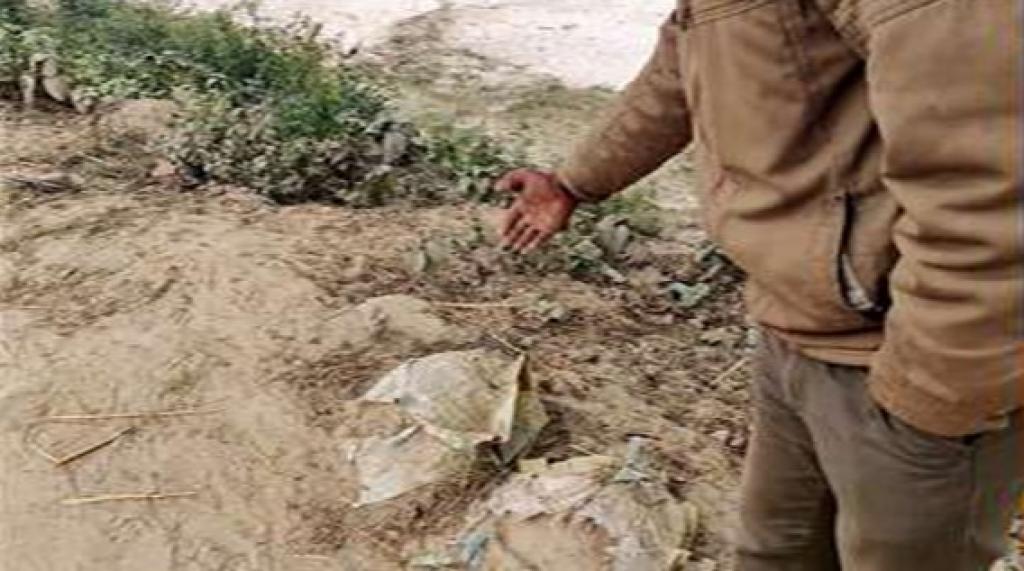 A United Nations Office for Disaster Risk Reduction report stated that the Terai region is one of the most likely regions to be impacted from climate change.

At the country-level, there has been progress in disseminating early warning information about floods and glacial lake outburst floods. However, Nepal’s national progress report on the implementation of the Hyogo Framework for Action notes that community-based early warning is an important step in developing resilience.

A number of disaster risk reduction documents prepared by the Nepal government assessed the impact of floods. They also recommended promotion of early warning systems (EWS) as a step in the right direction: Towards building resilience and adaptation capacities of communities .

The International Centre for Integrated Mountain Development (ICIMOD), district disaster management authorities in Assam's Lakhimpur and Dhemaji and the non-profit Aaranyak helped pilot the system in the state’s 40 flood-prone villages.

The intervention went on to bag a 2014 United Nations Framework Convention on Climate Change Lighthouse Award under the Information and Communication Technology category.

In the 2017 monsoon, life-saving early warning information was shared between an upstream village in Nepal and downstream communities living along the Ratu River in the Koshi basin in Nepal and India.

Here, information was quickly relayed from Lalgadh village via a caretaker to downstream communities in Sarpallo (in Nepal) and Bhittamore (in India).

The success lay not just in the functioning of the system, but in the people’s willingness to come together during the floods.

Villages like Launiya within the TKRM continue to work within their means to manage the severity of floods. With technical support from ICIMOD, the municipality invested in a CBFEWS system in 2019.

This gives the municipality more lead time to respond to flood situations and increase emergency preparedness. Satish Singh, TKRM Chairperson, who has been featured on local television speaking of the municipality’s primary developmental needs, realizes that these stopgap measures can only go so far.

“As a chairperson I think the CBFEWS is important for the community. I hope my successor considers this a priority as well. The danger of flooding is not going away anytime soon – our solutions need to match this and be sustainable as well,” he said.

Upstream and downstream municipalities, non-profit Sabal Nepal, ICIMOD, and IDEAL co-operative (a local cooperative) had tied up to ensure the sustainability of the early warning system at a two-day workshop  held in 2019.

An account was set up to cover the maintenance and operating costs of the system with financial contributions from TKRM and the upstream municipalities (Rajbiraj and Rupani).

This ensured the success of maintaining a system that provides flood early warning across administrative boundaries. This shared responsibility of a system that benefits both upstream and downstream communities is an example that can be applied elsewhere. 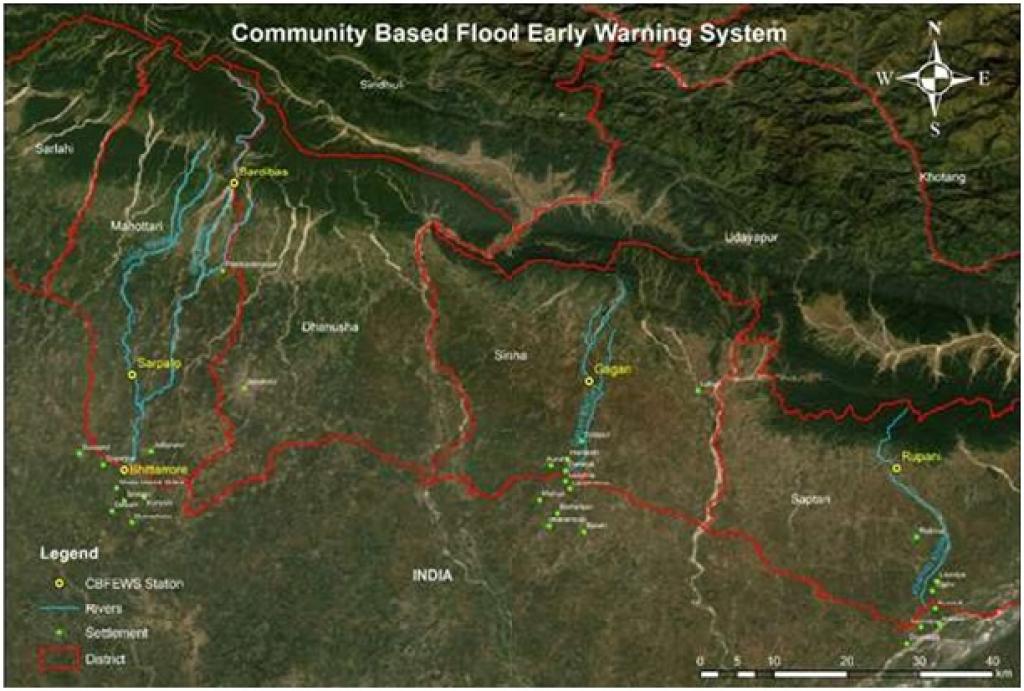 The account, opened with IDEAL cooperative, along with seed fund contributions from stakeholders, will accrue interest and will be handled by Sabal Nepal.

A symbolic cheque was presented by the municipality chiefs to the representatives of the local cooperative at the workshop.

IDEAL cooperative committed to the cause by promising a higher interest rate (2 per cent above prevailing market rates) and pledged to contribute an amount annually from its corporate social responsibility fund.

At the workshop, Prabhakar Yadav, coordinator of the District Coordination Committee (a district-level governing body setup for 77 districts in Nepal) pledged an additional Nepalese Rupees 200,000 (about $1,700), bringing the basket fund total to NPR 1,300,000.

During the two-day workshop, the TKRM hosted visitors from neighbouring flash flood-prone areas along the Gagan, Ratu and Khado rivers that flow across the border.

The visiting group included municipality members from Nepal and their counterpart village councils (Gram Panchayats) downstream in Bihar, India. The interactions focused on sharing experiences and learning. It was also about building solidarity in a shared risk environment.

The exchange mainly focused on the sustainability of the CBFEWS model and the four elements that make for effective early warning systems: Risk-scoping, installation of EW system and monitoring, networking and dissemination, and preparedness.

To reinforce this approach, a team of TKRM representatives and SABAL Nepal briefed the visitors on the disaster response setup. A visit was organised to the TKRM’s Local Emergency Operations Centre (LEOC) for this. 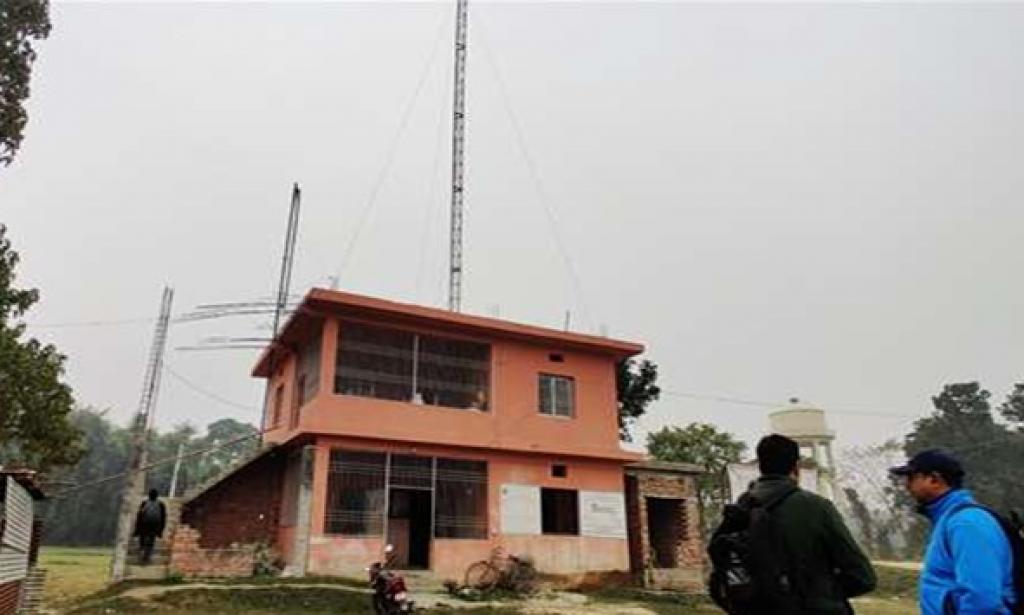 It is difficult to imagine the LEOC — a pink building with a tall radio antenna — submerged in the flood waters. However, scars from the earlier flood season remain visible on the building’s ground level, which is barricaded.

Singh recounted how medical supplies from the ground floor, which doubled up as the local health facility, had to be hastily shifted to the first floor. 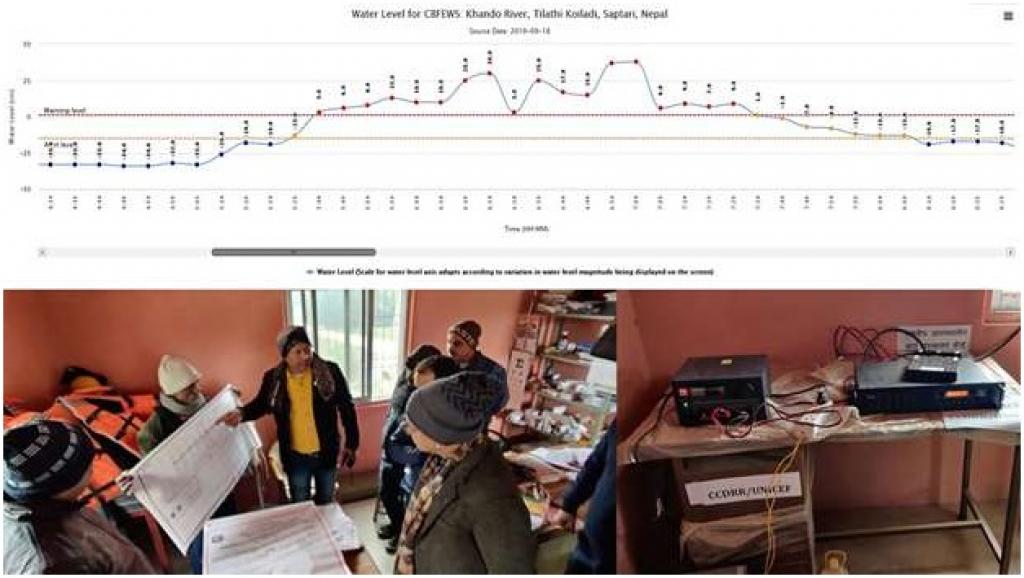 Despite such challenges, the TKRM set an example by investing in CBFEWS, making efforts to establish and sustain the system using the early warning information.

At the LEOC, Singh pointed to a screenshot of the application that is used in flood season to monitor the flood water levels.

He narrates how the TKRM and SABAL Nepal, which monitor water levels online, were able to reach out to communities and spread the word on the rising water levels.

Members from SABAL Nepal — optimistic about the system — mentioned how the CBFEWS setup has helped them move from disaster response to thinking about resilience building.

Noting the potential of the CBFEWS setup, a visitor’s willingness to adopt this system was reflected in his eager participation in the group preparation and presentation of roadmaps at the end of the workshop.

A key message that participants took home to their respective village councils is the value of the CBFEWS.

They were made aware of the significance of the lead time the system can provide during a disaster event, crucial for villagers to evacuate and move valuable possessions.

As for Singh, he wants to turn LEOC into a model awareness centre for other villages.

“Children from schools and colleges can learn more about reducing the impacts of floods in their own villages,” he said.