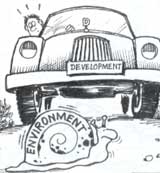 TRANSPORT policy is one of the biggest influences on the course of development and often determines how sustainable' that subsequent development will be. This is especially true wherever population densities are high. Yet it is subtle and is poorly understood. Each generation's lessons tend to be forgotten by the next and the same mistakes are made again. People seem to think that what goes wrong in one country "can't happen here". Currently, provincial France routinely repeats the strip or ribbon development mistakes of Anglo Saxon countries in the 1930s. Regularly, a new road bypasses a congested town and then acquires a row of factories or office blocks and more and more local traffic. Evehtually, a new bypass has to be built and soon the whole shape of the town turns out to have been decided by the course of a road delineated by civil engineers three decades before.

In a democracy, how does one educate public opinion in the basics of sustainable transport policy so that people and their governments can make intelligent choices- unswayed by lobbies of motor manufacturers, road building civil engineers , land owners, local government functionaries or small shopkeepers?

Recent European experience suggests that the most effec- tive way is based on bizarre theatrical performances in which conventional press campaigning is combined with building tree houses, jousting with the police, advocating the rights of snails and birds in court, obstructing bulldozers by lying down in their path and deploying pantomime cows.

All these means were used recently in the 'Third Battle of Newbury' around a new road bypass being built to the west of a modest market town in southern England.

In the case of the bypass the objectors he hopes of actually stop the road from being bui but that was not regarded as a reason for not trying. Oxford, the accepted home of lost causes, is only 20 miles away and lies on the A 34, a congested road, which was once itself a bypass in the 1960s.

Nobody knows just how many hours of air time and how many column inches have been given to the bypass battle Peter Stone is a UK-based environmental activist and free lance jouranlist if it were paid for at peak hour advertising rates, as is the case with public service educational messages, the bill would be counted in millions of dollars. That is the point of the exercise - to educate the country in environmental basics at the lower cost.

The chemistry of the way the media pays attention to environmental protests is such that the actual views of the environmentalists have to be covered, not just their antics. There have to be explanations as to why they suffer being assaulted by the police, why they sit up in trees with their ban - ners, jn shifts for weeks on end, and why they camp in the winter by an arctic snail habitat in a bog.

I am reminded of an earlier environmental demonstration at the UN Stockholm Environment Conference in 1972. That was the first time government ministers and their bureaucrats were exposed to the irreverence and originality of youthful environmental protest. The protestors parraded a more or less lifesize whale in the streets of Stockholm, carrying the message "Maybe Dick". The whale was made of black plastic sheeting, some padding'and a double decker omnibus. It was not there for just effect. It helped to make the fate of whales a symbol of the success or failure of the Stockholm conference.

Another feature turned to good effect is the general look of the protesters as seen on television, contrasted with, say, the mayor of the town or of the remaining tracts of heathland and the defilement of the North Wessex Downs Area of Outstanding Natural Beauty.

The exposition of the administrative and conceptual mess surrounding the government's road building policy is thus given a general public prominence it would otherwise never receive. An ammunition box of fact and case study was made available in the public domain for use in the next struggle over transport policy. There is little doubt about what sort of people will find it useful next next time the policy will change.

Conventional democracy s little influence on this :ourse of events. The way forward is to promote informed environmental awareness among all the people. If it requires young activists up trees and conniving journalists playing it for laughs and instruction at the same time - so be it.