Pre-summer rains: How the charm of Chandigarh endures

Every year, the ‘City Beautiful’ located between the Siwaliks and the Indus Plain, plays host to a game between heat, cold, dust and rain, leading to mesmerising vistas, before summer finally takes hold 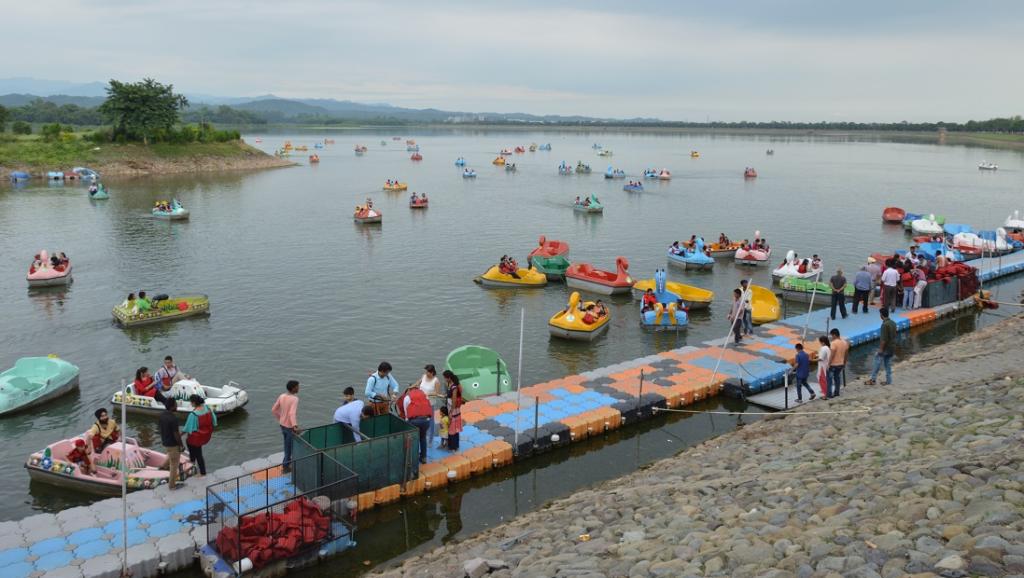 Boats in the Sukhna lake of Chandigarh, with the Siwalik Hills in the background. Photo: Biswarup Ganguly via Wikimedia

Each year, as the cold retreats and woolens are packed away, the ides of March give way to the uncertainty of April. Out of the blue, the weather changes and compels the premature storage of woolen clothes to be postponed for a few days. And, as the sprightly spring of April lingers on, one could be forgiven to confuse these languid days to the early onset of the winter chill in November.

A Chandigarhi is forever unsure of biding adieu to the winters or to accord a welcome to the summer ‘loo’, the hot wind of the northern plains. But it is no fault of the person as the land sends mixed signals during the last weeks of April and early May.

The onset of deathly silence with scarcely any wind and steadily increasing heat is shattered by dust storms which rise suddenly, cascading in waves over the horizon and then, abruptly, a steady rain starts washing down the dirt from the now shining trees.

Every so often, the dust storms get as confused as the humans and roar in, accompanied by squalls of thick raindrops. It is this moment that poets crave for, when the rain becomes the storm and the storm is escorted by thunder and lightning and the Himalayas seem to glow.

When it rains in Chandigarh, it is easy to imagine life in the hills. And the newspapers add to the intrigue of the hills. Sometimes, it is a wistful “A fresh spell of snowfall in the higher reaches of Shimla has led to disruptions in electricity”. Sometimes, it is ominous: “Widespread rain, intermittent snow and heavy hail caused extensive damage to apple orchards in Himachal Pradesh on Friday”.

When it snows in Himachal, the joys of the chilly Himalayan draft is felt most by Chandigarhis who must surely thank the visionaries for choosing this site to setup the future capital of two states.

Sometimes, the strong Himalayan winds bring inordinate ‘chills’ down to the plains, confusing sundry personnel newly transferred to the Union territory. They may be from Kerala or Bihar, but weather is what they talk about all the time.

For, unlike their ingrained habit of mild winters, wearing woolens is the norm in Chandigarh even as late as April. And with the heat and cold alternatively playing hide and seek, Sector 17 plaza is an ideal location to witness the mass confusion that office-goers face. For one day they may be dressed in two layers during their never-ending afternoon siestas, and sometimes in a plain t-shirt, exhibiting their summer best.

Human beings aside, nature seems to be having all the fun. The trees that abound by the roadsides seem all vivacious, with an explosion of colours that changes by the minute. Birds chirp away to glory, with a colony of grey hornbills near the Government Arts College especially cacophonous as they crowd a giant peepul in the campus or have mud fights below the casuarina plantation in the vast grounds of the Chandigarh Museum.

Bauhinias flower everywhere, the mulberry tree looks even more beautiful. Trees appear richly laden; they look fragile as well. And for a moment, all that the morning walkers like to do is gaze at the ‘tree’ and admire its beauty. For seated on the tree and often around it are multitudes of babblers, or the seven sisters, who make a loud effort to take over the city beautiful, even if it were for brief moments.

The koel starts calling early in the morning, ‘cooing’ through the rose garden and further down the spine of Chandigarh, sometimes all the way to Sirhind. A newcomer may be forgiven to be led into believing that this ancient land was the fiefdom of the equally ancient koel. But the koel plays another important role. Their ‘coo coo coo’ is a harbinger of the rains in the rapidly turning grey sky.

And the storms can change the weather on a whim. A sultry morning with searing hot winds often takes a turn towards the middle or sometimes late in the afternoon. A slight rustle, a few flowers trembling and then as suddenly as a morning that comes after a dark night, the storms hit the countryside.

Dust storms, the size of skyscrapers, cover a swathe and enter your house, your room and very often on your very self as well. The swirls cast a shadow on the Kasauli hills and things look highly apocalyptic. Are the storms fiercer now as compared to earlier days is a debate that many have, with the increasing pollution from construction sites cited as a cause for worsening dust storms in the past few years.

The rains that follow are of three types. One follows the dust storms and calms the restless sky. This rain is often brief yet cools the world for a day or two. And then, there are the rainy dust storms where dust and rains hit together. These are the fiercest storms as lighting joins the fun, sending waves of light and sound through the horizon.

The third type of rain is accompanied by a slight flutter of wind and seem to play the all-important role of nature’s khas-khas, considerably cooling the world so that we may survive another May day.

The early morning squalls, however, seem to overwhelm all forms of weather anomalies. Copious amounts of windy rains lead to the creation of a multitude of temporary dams, stitched from fallen leaves and forming giant puddles. These morning rains have the effect of bringing the city into a forced silence, the only sound being the screech of the winds.

When the rains and the storms stop and you step out to walk, broken trees and ragged bushes welcome you. But if you are close by and happen to visit the Sukhna lake, you will be treated to the most intense layering of colours that forms thick bands, extending all the way to a picture-perfect heaven tinged in blue.

And then, as suddenly as it had paused, life again begins anew as fresh grass sprouts and the flowers face the sun head on. A bird then decides that it is time to make a racket again.