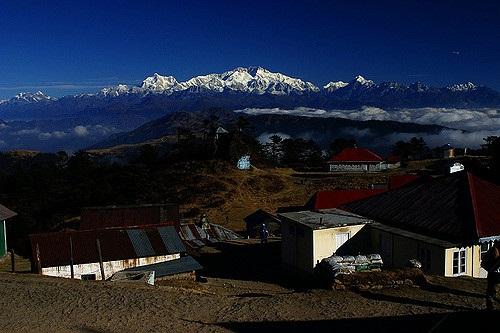 The Sandakhpu trek is famous among trekkers, as it offers a stunning view of the world’s highest mountain peak, the Everest.

Along with Mount Everest, trekkers can also view the snow-capped peak of the world’s third highest mountain, and the highest peak in India, the Kangchenjunga. I decided to undertake this journey as part of a trekking organisation called IndiaHikes.

It was a pleasant surprise for us at the Jaubari base camp when the team leader introduced the eco bag concept to us. We were told to dump our food wrappers, packets and other wastes in the bag and then leave it every day at the base camp.

The eco bag is part of a larger IndiaHikes initiative to clean up the mountains known as Green Trails. I must confess I was happy and pleasantly surprised that people were finally taking action against environmental degradation due to human activities along trekking routes.

Back in December 2012, when I took part in the Roopkund trek, I saw a huge amount of food waste dumped in pits. I saw crows feasting on rotten food at the IndiaHikes’ camp. I wrote an article criticising commercial hiking organisations (On Wrong Trek) and argued for strict laws against food dumping. I also wanted restriction on the number of trekkers on major Himalayan routes.

IndiaHikes has come a long way since I wrote the article. This time, I witnessed the level of understanding among the organisation members about the negative consequences of unchecked human activity in the higher reaches of the Himalayas.

Based on my experience of hiking in Sandakhphu, I can say that the organisation has made sure to promote sustainable stay and lodging options in existing tea houses.

Also, the group has taken initiative to educate trekkers about environmental degradation and disposal of plastic bags and wastes along trekking routes.

However, responsible behaviour has to be ensured on the part of locals too. At several places along the trek, we found beer bottles and gutka packets lying around camp sites. I am convinced that education of locals, along with trekkers, is important to promote sustainable trekking. Due to lack of awareness among trekkers, tea houses/dhabas dump waste along mountain sides. We saw piles of egg shells and other wastes lying next to a tea stall in Sandakhphu at 3657.6 metres.

Commercial trekking is an integral part of the local economy, and in most cases, the only source of revenue generation for locals. Organisations such as IndiaHikes have set up infrastructure in inaccessible places on the mountains. These organisations should use their networks and economic power to promote cleanliness in the mountains by engaging locals. Locals should be encouraged to cook sustainably and dispose waste carefully.

In our group comprising 20 people, each person could have easily paid Rs 1,000 more if India Hikes promised to support tea houses that promote sustainable cooking methods and dispose their wastes efficiently.

I would like to say organisations such as India Hikes should float NGOs or turn themselves into social business groups, promoting sustainable trekking in the Himalayas.

The first step towards this would be to set up infrastructure for waste disposal and other environment-related initiatives in the Himalayas. It is important to recognise the fact that there will be no trekking in the absence of beautiful mountains. If we do not change our habits, environmental degradation will worsen. India is the fourth largest carbon emitter in the world, and its emission grew by five per cent whereas in China (the largest emitter), emission decreased by 0.7 per cent (India’s carbon emission grew by 5% in 2015).

Recently, the Indian government has taken steps to protect the natural habitat of Kaziranga, though I am doubtful that any effort by the Centre to protect the environment is mired in corruption and red tape.

I think it is vital for the trekking community to come together and establish a sort of trust and social enterprise to save the fragile environment of the Himalayas, before we lose one of the most beautiful places in the world.