Saraswati: the river that was

From time immemorial, the river Saraswati is akin to a goddess 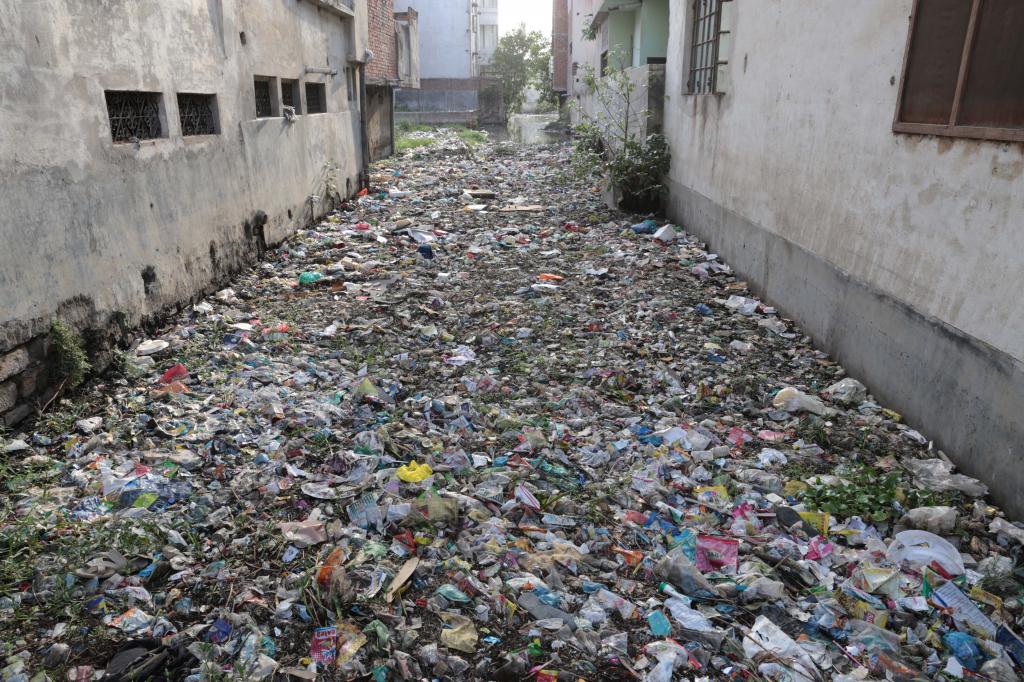 The urbanisation of the area has made the Saraswati river a garbage dump yard. Photo for representational purpose only. Credit: Vikas Choudhary

In Kurukshetra, under a bridge and next to a funeral home, a foul smelling drain flows, which the locals identify with the mythological and sacred river once called the Saraswati.

Today by the look of it, it cannot be more than a drain and the first thing that caught my eyes was the water, which appears as black as soot. The place has become a dump yard for the locals.

The first person that we met while surveying the course around this area was a local shop owner named Rajan. Rajan sets up the scene—how the river as old as any in the world was revered since the Mahabharata times.

The reason as to why people settled here was this very river. “Pooja karte the Saraswati ki yaahan par”, his eyes lit up with memories of the place, which he remembers was a place of veneration.

From time immemorial, the river—to his forefathers and many around the place—is akin to a goddess, whom they have worshipped, drank water from and used its water to cultivate their fields.

“Roz nadi par karte the,” he says, answering all my questions at one go. The river that was had clean water, flowing with full force, and the condition it is in today was not how it always was.

“Seher ke kachre ne sab barbad kar diya.” My romantic interlude on history is cut short as Rajan brings me back to reality. Today, sewage from all sides of the town is dumped into the river without any treatment, including industrial wastes from factories like the one just upstream from Bohnikheda, which he calls the “gatta factory”.

“Zamindaran ne saari zameen lai li,” Harbans answered joining in the conversation. Harbans, who is a local farmer, came to India from Pakistan during the partition. The petty landlords encroached upon the catchment area of the river and as the flow receded, the practice continued.

Thinking out loud, Harbans ponders “aithe meenh ghat painde han”, suggesting that the current state of the river is also attributed to the fact that the region receives little rainfall. “Meenh” in Punjabi means rain.

As we stroll through the weeds growing in the filth and dirt, Harbans looked on at the course of the river and says, “aithe vohot vadde vadde vagh bagichee si”.

He explains how the place had lush green gardens and dense trees that were eventually cut down for various reasons.

The most plausible reason for the present status of the river was the Green Revolution and the vulgarities of industrialisation.

Too much use of fertilizers and pesticides and growing rice (which requires a lot of water) in a place where rainfall is scanty can be termed as foolish by many.

The urbanisation of the area led to the river being converted to a sewage and garbage dump yard. ‘’Drainage tunnel ko hatana hoga, pakka ghat banana hoga,” Rajan suggests with a tone of finality as we reach the road.

Interestingly, the locals have brilliant ideas for the revival of the river. All that needs to be done is their involvement and mobilisation.

It is ironical how development can blind people and the state. “Hale bhi aithe ruk ke hath jod ke jande ne,” “Pakistan ton vi aithe mattha tekan aunde si,” these words of Harbans had a huge impact on me.

“Once-revered-river-now-turned-into-a-drain,” in a line, points out the ironies of the present world. Man today has become a slave to the comforts that the world has to offer, even if it is at the cost of the environment that we live in.

For me, the term development will never mean the same again and the river that was will always be a symbol of the vulgarities “development” has to offer.