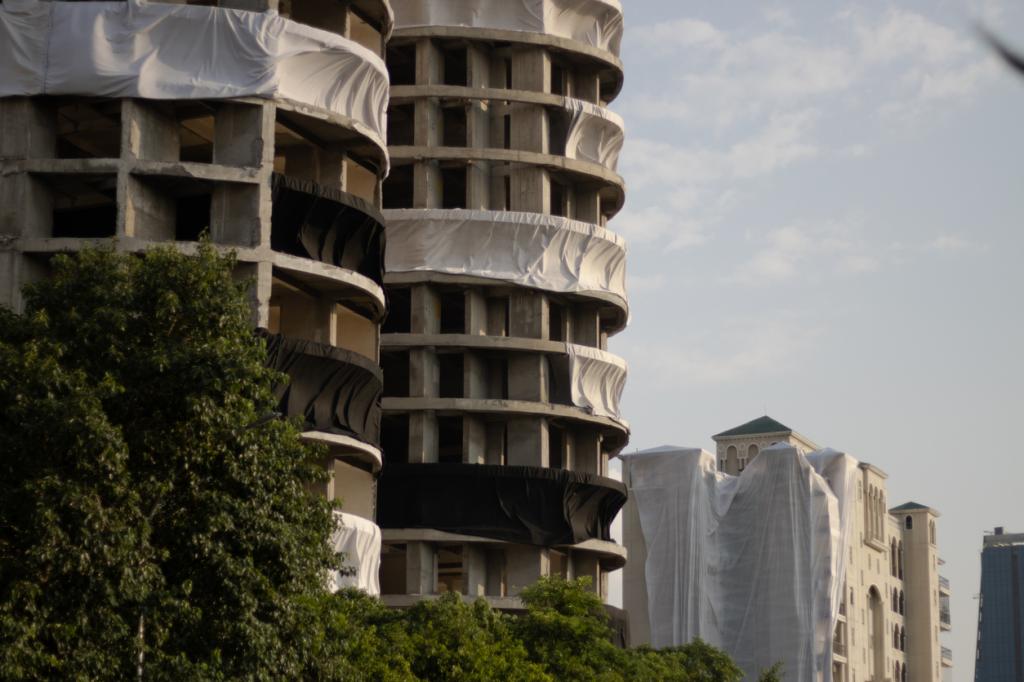 Indians rarely celebrated the demolition of skyscrapers before the implosion of the two residential towers in Noida, Uttar Pradesh on August 2, 2022. The two towers — Apex (32 stories, 100 meters tall) and Ceyane (29 stories, 94 meters tall) — were reduced to rubble in just 9 seconds.

Explosives were fitted into the building by drilling holes into it – a technology borrowed from South Africa.

The media called the event “spectacular”, a “fitting lesson to unauthorised builders” amid  “wild smiles, loud cheers and excitement”.

The towers were demolished due to builders flouting the height and specifications stipulated by the Real Estate Regulation Act.

But such a massive structure wasn’t built overnight or away from the public eye. Yet, at the time of the construction, no authority intervened. If media reports are anything to go by, the Noida Authority even colluded with the builder to draw up plans without considering the regulations.

While the residents and authorities were busy enjoying this ‘spectacle’, they conveniently ignored the ‘thick cloud of dust’ that enveloped the area in the moments after the demolition.

The mission was also deemed a success after the dust allegedly disappeared within a few minutes, and the air and sky looked clear to the naked eye.

The dust that emanates from such massive demolition activities is actually very harmful. The dust particles split into micro particles, which linger in the air invisible to us.

If the so-called ‘clear air’ could be sampled and placed under scanning electron microscope and atomic absorption spectra, the microparticles would be seen laced with toxic trace metals, demonstrating the extent of their spread in the environment.

A preliminary look at the composition of cement reveals that it contains lime, silica, alumina, iron oxide and gypsum. The portland cement contains fly ash. Together with these constituents, there can be toxic metals like mercury, antimony, selenium, strontium, zinc, arsenic, uranium, cadmium, chromium and, importantly, lead.

Fly ash is notorious for high contents of mercury, cadmium and lead. It is certain that dust and smoke that billowed out and spread all across during implosion contains these toxic metals. The dust that settled on vegetation and homes in the neighbourhood must be examined for traces of all these toxic metals.

The toxic compounds settle into lungs and cause irreparable damage. Sprinklers and street sweepers cannot remove the toxicity in the dust settled on roads.

Asthma and chronic obstructive pulmonary disease are already on the rise in Delhi and these patients are more vulnerable now. Was there a warning from health experts or doctors about the effects? The answer is a resounding no.

The soil could have presence of radon gas from the transmutation of uranium. Radon is a known carcinogen. In India, there is no emphasis on radon. In the US, it is common to examine the basements for the presence of radon gas and is a first step in buying a home. The rubble from Noida should be tested for the gas.

Shifting the 80,000-tonne debris safely will take three months and distribute the dust / microparticles across the national capital and surrounding areas the transportation trucks pass through.

Before the demolition, there was no news on how the debris will be treated or where it will be dumped. There was no mention from any agency or expert about the environmental impact the activity will cause and how it pollutes the earth, soil and water bodies by these macro and micro particles.

Was the carbon footprint assessed? Evidently there was no environmental impact assessment done ahead of the work.

The authorities engaged a Hyderabad firm to transport the rubble to another place and make “wealth from the waste” tiles, among other things. The reclamation of recyclable scrap from the rubble requires separation of steel and iron rods. The final pulverisation of remnants will produce more microparticles.

Poor labourers will be exposed to lung diseases such as silicosis caused by these particles. Does this Hyderabad firm have enough scientific knowledge? Do they share the desire, concern to protect the poor labourers, people and environment? It is a doubtful proposition.

It is quite likely the toxic materials will end up in landfills and dump pits. During the rainy season, these leach into earth and pollute the soil, vegetation and water bodies, and during summer emanate toxic fumes.

It has been reported widely in the medical literature that how the firefighters and people who worked on 9/11 rescue and debris removal suffered chronic lung diseases.

There are buildings much taller than these two demolished towers but they are safe. For example, the tower Edison in New Jersey, the United States is a famous landmark.

The state government should have constituted an expert committee to go over the stability of the structure, before demolition, if necessary by foreign experts. The most appropriate way to handle this situation would have been to put the towers to charitable public use after ascertaining the safety and stability. Instead of demolition the towers should have been used for some other constructive public purpose.

A few questions now crop up: Hypothetically, if a dam is constructed by one state on a river and another states or governments object, will it be demolished? If the demolition led to collapse of the nearby buildings, loss of lives, who will be responsible?

There are several angles and shortcomings in this demolition expedition business, consensus and structure.

Finally, let’s look from a human sensitivity angle: To build the tallest tower in India is a herculean task. Structural, design, architect engineers and trained labourers did a remarkable job. Was there any attempt to understand how the construction personnel felt at the demolition and how their morale was affected? There were “mourners”, as one architect wrote in an article.

The country’s precious resources — cement, steel, water, logistics and technology — that were used for the construction are now wasted. This is in addition to the sweat, toil and tears of the workforce involved with the project. Construction and demolition come with a huge carbon footprint.

The opinion uniformly echoing in India in the aftermath was that the real-estate lobbies have been punished.  The truth is they recovered their money in some other venture. The middle-class owners who paid installments will likely feel the pain. They must fight a stiff battle to get their money back.

Construction is difficult and takes several years; demolition takes minutes. There is nothing to feel proud of the destruction. If we assess health and environment angles, the loss is immense. It will be known after months or years if one cares to examine.

For the future, let’s not think of demolition as a panacea to deal with real estate violations. There should be a comprehensive policy on demolitions from the health, environmental and resources points of view.