Is this carbon tax, imposed on the carbon content of fuel, doing what it should—reduce greenhouse gas emissions that are responsible for climate change?

Budget 2015, presented by Finance Minister Arun Jaitley, has a first. In it, India has accepted that it has a de-facto carbon tax—on petroleum products and dirty coal. Arguably, the only big green initiative of this budget is the increase of cess on coal—from Rs 100 per tonne to Rs 200 per tonne. But the question is: is this carbon tax, imposed on the carbon content of fuel, doing what it should—reduce greenhouse gas emissions that are responsible for climate change? In other words, is there a design behind the carbon tax to ensure we move beyond polluting fossil fuels? 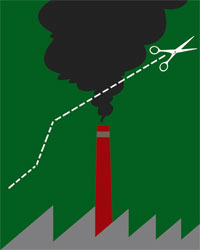 The budget follows from the Economic Survey, which states that high price on diesel and petrol are important price signals to limit consumption and, hence, CO2 emissions. In 2014, taking advantage of the global fall in fuel prices, subsidy or under-recovery has gone and the government has increased excise duty on both petrol and diesel. So even though fuel is cheaper, the tax component is higher. The Economic Survey estimates that based on emission factors, currently, India imposes an implicit carbon tax of US $140 per tonne of CO2 on petrol and US $64 on diesel. This is substantial.

The Economic Survey also estimates that the cess of Rs 100 per tonne of coal is equivalent to a carbon tax of US $1 per tonne of CO2. It argues that this cess should be increased so that it can lead to CO2 reduction and also better reflect the health cost of emissions from coal-fired power plants. It calculates that a three-fold increase from the current rate would lead to an annual CO2 emission reduction of 129 million tonnes—this is equal to seven per cent of India’s current emissions. A five-fold increase in the cess would equalise price of domestic coal with international and would contribute to annual CO2 emission reduction of 214 million tonnes, which is 11 per cent of India’s annual emissions.

In budget 2015, the finance minister has opted to take the slow road and has doubled the cess on coal to balance the need to tax pollution and the price of power in his words. He also mentions that India’s de-facto carbon tax on most petroleum products compares with international norms. But is this tax an adequate signal to bring about change?

Let’s take petrol and diesel. The fact is that the government has increased the tax on fuel because it is convenient. It will be important to maintain this “carbon tax”, even when the price of petrol and diesel increases in the international market. But it is also a fact that the price of these fuels is lower today and as far as the consumer is concerned, the signal to change consumption is weak and inadequate.

Therefore, not only does the government require to tax these polluting fuels, it also requires to use the tax funds and much more to provide infrastructure to wean us away from cars or using roads to transport goods. What is bad is budget 2015 is doing the reverse. It says it will set aside Rs 4 per litre of the excise duty on petrol and diesel for a dedicated road cess. This tunnel vision of viewing infrastructure for transport as just “roads” is regressive. Instead, what is needed is to reinvent mobility so that it moves goods and people, and not vehicles. The fact is that budget 2015 has recognised that this excise duty is a carbon tax, which is putting a price on each tonne of CO2 emitted. Now this tax must be used to help shift to less carbon-intensive ways of production.

We also know that the health costs of air pollution are very high. Budget 2015 does little to address this concern. It does not say that the excise duty collected on dirty fuel will be used to upgrade refinery technology so that we can get clean fuel and breathe easy. It is also a fact that even though the government is no longer subsidising diesel, its price remains lower than that of petrol, mainly because of differential levels of taxation. So, even though there has been a decline in the number of diesel private cars being sold, it is not enough to make a dent in pollution levels. Therefore, what is needed is to tax diesel vehicles to equalise the price differential.

This is also the case with coal cess. The government now aims to use this cess to clean the Ganga or build toilets. All this is important but takes us away from the objective of moving away from using polluting fuels or cleaning emissions from thermal power.

Report of the expert committee on auto fuel vision & policy 2025

CSE trashes contention that diesel use by cars is very low