Big business in Germany more than in any other country. But how delighted should an environmentalist be with this development? 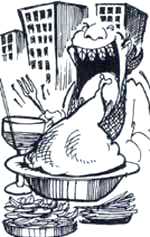 HOW do we restructure the economy of the rich world so that it can live in harmony with its environment and with that of the rest of the world?

The state of North Rhine Westphalia (NRW) in Germany, which includes the cities of Bonn and Cologne, is one of the richest regions in the world. The state's Social Democratic government recently convened, through one of its research institutes, a meeting on the Ecological Restructuring of NRW. I found it a fascinating meeting because it brought home to me the seriousness with which the government, industry and researchers are looking for ecological solutions.

Researchers at the meeting presented a series of tools, such as environmental audits, cost-benefit analyses, product life-cycle analyses and eco-balances, that could be used to identify trouble spots in industrial production and find solutions to them. Industry prefers to modify production processes so as to reduce waste and emissions, rather than invest in end-of-the-pipe solutions.

Economists are confident this can be achieved. As one of them put it: "Over the last hundred years, we have been trying to improve labour productivity. But in the next century we should be improving energy and material productivity and possibly reduce labour productivity a bit. This will make us a lot more positive towards the environment and possibly also create more jobs." Over the years, said one participant, Germany should cut its energy demand by three-fourths and materials demand by nine-tenths.

But how and why will this happen? Several Germans believe the answer lies in manipulating the market in such a way that it sends out the right signals. Surely, this demands an interventionist state, which will prod the market along? The answer could lie in "ecological tax reforms". Said Ernst Ulrich von Weizsacker, director of the state-run Wuppertal Institute of Climate, Environment and Energy Studies, "If nature is what we want to protect, then it is the use of nature that should become increasingly expensive through appropriate taxes and charges." Weizsacker argued that an economy is well-off when prices are realistic and he wants prices on raw materials to increase steadily by 5 per cent per annum.

The idea is gaining ground. Citizens will not have to pay more taxes because the proposed tax reforms can be revenue-neutral. In other words, revenue raised by taxing the use of nature -- use of energy and materials and production of toxic wastes and substances -- can be balanced by reductions in other taxes.

There are other researchers who are looking at sectoral issues and also shifts between different sectors. A lot of people have been studying the energy sector for some time now. But researchers are also looking at traffic and the workplace: how can they be made more environment-friendly? Traffic experts, for instance, no longer like master plans that separate the workplace and the home because that means people have to commute long distances. As a result, the key objectives of traffic planning now are to reduce traffic volume, the distance travelled and the time spent in travelling.

With technology becoming more and more environment-friendly, there is no reason to keep work and residence apart. Work should not be further than the distance a bicycle can take you conveniently. Walking should be promoted. In other words, instead of large cities running on cars, there should be compact settlements with multi-modal transport and multiple land use. As it is not possible to completely change the traffic system already in place in Germany, one of the experts argued they should be looking at settlement structures instead. Retrofitting good ideas into existing bad structures is not always going to be easy, but some solutions can definitely be found.

Johannes Rau, a key leaders of the Social Democratic Party in Germany and prime minister of NRW, could not attend the meeting because the party's own conference was going on at the same time. But at a dinner engagement, he urged the participants to appreciate that "less can mean more". And in his speech, read out in absentia, he expressed his confidence that NRW would be able to achieve the ecological transformation for the province was already a world leader in environmental management, with more than a thousand firms selling ideas and products to keep the world green.

Providing the impetus for all these people -- from politicians to industrialists -- are the new consumers who reveal a high level of self-determination in the way they lead their lives and who do not value themselves simply by how much they own as compared to others. Gerhard Scherhorn of the University of Hohenheim presented empirical evidence to show that there is now a substantial number of "autonomy-oriented", independent-thinking consumers who do not just want to accumulate more and more things, but think more about what they will do with these possessions once they buy them.

This type of consumer behaviour is strongly correlated with high levels of education -- the longer the educational period, the more independent the consumer behaviour. Such people spread through the society as highly qualified professionals, and because they are rich, they influence the economy considerably. Some two-thirds of the German GNP passes through consumers' pockets.

How delighted should an environmentalist be with these developments? It all depends on your political leanings and your own ideological perspectives. Said Wolfgang Sachs, an environmental analyst at the Institute of Cultural Sciences in Essen, "Radicalism has gone out of the green movement now." He argued that German capital has assimilated green concerns more than in any other country. And German capital and polity are clear the green ethic can be incorporated into the system of markets and competition, and its big dream is that it can still lead the world in the industrial arena. In the face of this extraordinary co-option, the only criticism that the greens can now offer is "too slow and not enough", observed Sachs.

To clinch his point, he took me to the huge breakfast spread in the mega-hotel, where we were talking. A notice proudly said: "Umweltfruhstuck" or "environmental breakfast". This was because nothing on the table had any packaging. Germans have taken strong steps to reduce waste by cutting down on unnecessary packaging. "But," added Sachs, "nobody, of course, is questioning why we need such a hotel?"