Even the mice won't eat 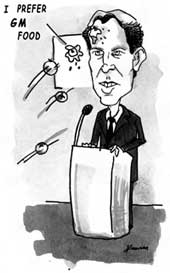 The first genetically modified (gm) food product to hit the market was a brand of tomato called 'Flavr Savr'. Before it was made available commercially in supermarkets, scientists fed it to rodents in the laboratory. The rodents, however, refused to eat the gm tomatoes, which contained an alien gene to make them ripen more slowly. When force-fed, the rodents fell sick.

Flavr Savr was a commercial disaster. Since then, the rich and industrialised Western countries, mainly the us, have brought over a score of gm foods onto the market shelves. Ably backed by the powerful American propaganda machinery, we have been repeatedly told that these 'novel foods' are no different from conventional foods. And joining the deafening chorus is the 'shouting brigade' -- agricultural scientists, print and electronic media, bureaucrats and politicians -- all desperately looking for financial support to survive in the era of fast-shrinking public funding.

Such is the desperation of these finance-seeking sectors of the 'shouting brigade' that any voice that ultimately restricts their source of funding is met with a combined roar. This is exactly what British scientist Arpad Pusztai discovered when he reported harmful effects in rats fed with gm potatoes. His independent research showed damage to the kidney, thymus, spleen and gut of young rats. Pusztai not only lost his job, but also became persona non grata for the entire scientific community. Several other researchers, who ventured to question the veracity of these 'scientific facts', suffered similarly. In fact, any criticism of the biotechnology industry's 'cutting edge' technologies is met with sharp innuendoes and abuse.

Following the current scientific norms, Hinze conducted his experiments on mice. He picked up 30 female six-week old mice from a herpetology centre. These mice were originally bred to feed snakes. And like every net-savvy teenager, he searched the web on how to take care of mice. Based on what was spelled out, he bought some rodent mix and Kellogg's and Quaker's cereals and oatmeal that were specified to be 'gm-free'. This formed the staple diet for the mice. For gm foods, he used maize and soya. Hinze let the mice loose in big cages with two piles of food -- gm and non-gm -- stacked in four bowls. The mice, obviously unaware of the virtues of genetically modified 'functional foods', gave their verdict overwhelmingly against the gm food!

He conducted a series of other tests to find out what happens when the mice are force-fed with gm foods. Significantly, one mouse, which was fed with gm food, died for unknown reasons. The others, which were fed on a gm diet, initially looked heavy. By the end of the experiment, however, they actually lost weight. The rival group of mice that were on non-gm diet, ate less, gained more weight, and continued to gain weight. Equally worrying were the behavioural changes that the diet induced in the mice. The gm-fed mice 'seemed less active' and 'more nervous and distressed'. "Many were running around the basket, scrabbling desperately in the sawdust, and even frantically jumping up the sides; something I'd never seen before," he was quoted as saying.

To restore its credentials, the Royal Society released a report -- Genetically Modified Plants for Food Use and Human Health -- in the first week of February. Under pressure from the British, and European consumers in general, who continue to question scientific claims on gm food safety, the Royal Society has called for tougher regulations before gm food is passed as safe for human consumption. As a face-saving device, it has drawn attention to potential risks for babies if there are changes in the nutritional make-up of the food.

The report is full of contradictions. It states, for example, that consumption of genetically modified deoxyribose nucleic acid (dna) has no effect on human health. Are babies not humans then? It also chooses to ignore evidence that questions the wisdom and safety of gm foods. The report claims, as one of the benefits of gm foods, the decreased use of pesticides and other chemicals. There is, however, evidence that goes to show that gm crops are often susceptible to new kinds of pests and diseases, leading to the increased, rather than decreased, use of agricultural chemicals. Evidence that gm crops show reduced yields with successive generations also finds no mention.

I cannot help but wonder what the Royal Society would advise British Prime Minister Tony Blair, who has publicly gone on record saying that he finds gm food safe, even for his children. With the Royal Society proving him wrong, Blair may find it worthwhile to invite Hinze Hogendoorn to help his children conduct simple experiments with mice to find out what is safe for them. Until then, he should direct British High Commission offices worldwide to refrain from issuing press releases stating that gm food is safe.

Devinder Sharma is a food and trade policy analyst