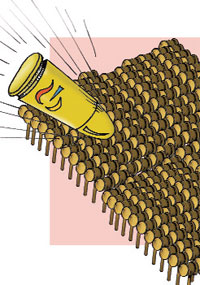 For sheer persistence you have to hand it to Novartis. Ever since its blood cancer drug Glivec was refused a patent in 2006, the Swiss multinational has been fighting India’s patent law, or at least a crucial section of it, with the patent authorities and in the courts. With case now in the Supreme Court, there is a high sense of expectancy— and unease.

The case centres on Glivec (imatinib mesylate), described as the “magic bullet” to cure cancer. It is expensive, prohibitively so by Indian standards, at Rs 1,20,000 per patient per month, and its patent application was contested by the Cancer Patients Aid Association (CPAA) and a clutch of generic companies manufacturing the drug in India, all of whom filed pre-grant opposition to Novartis’s patent application. While the patients’ group cited accessibility issue because of the cost, the generic companies disputed the novelty of imatinib mesylate.

Novartis had applied for a patent for the drug in 1998 and it was only after 2005 when the country began to grant patents in 2005, this case came up. It turned out to be pivotal test of the country’s special laws preventing the “evergreening” of drugs. Evergreening is the practice by which originator pharmaceutical companies extend the patent life of a drug (usually 20 years) by making incremental changes to an existing medicine. Section 3 (d) of India’s Patent Act, 2005, sets out the limits of patentable subject matter and specifically bars “a new form of a substance which does not result in the enhancement of a known efficacy of that substance”.

The crux of the matter is that imatinib mesylate is the beta crystalline form of the already existing imatinib mesylate which Novartis had patented in 1993. It obtained the new form of the drug by converting the free base to a salt form and then obtaining the beta crystalline form that is supposedly the most stable form of the salt. Novartis claims that this form is more effective since it is absorbed more easily into the blood.

The multinational’s initial case became a cause célèbre with health activists and patient groups also taking to the streets on the issue of affordable healthcare. Indian generic manufacturers were then selling their version of the cancer drug at Rs 8,000- Rs 10,000 per patient per month. The legal aspects of this case were of supreme significance for the country—and for the rest of the world that was dependent on inexpensive generic medicines from the “world’s pharmacy” as India is known.

When the Patent Office, Chennai, rejected its patent claim, Novartis challenged the validity of Section 3 (d) in the Madras High Court but its efforts to get this section struck down failed when in August 2007 the court upheld it. Despite a worldwide campaign by Medecins Sans Frontieres, the well-known medical humanitarian organisation, to get Novartis to drop the case the multinational persisted. It challenged the rejection of its patent before the Intellectual Property Appellate Board (IPAB). Known as the Merits Case, it was filed at the same time as the first one but hearings began only in late 2008. In this second attempt against Section 3 (d) Novartis was essentially challenging the interpretation of this crucial section of the law.

It once again lost its case when IPAB rejected its argument and declared that imatinib mesylate did not meet the criteria laid down in Section 3 (d). This was in July 2009. Not that it deterred Novartis. It is now arguing before the Supreme Court that the interpretation of efficacy by the Madras High Court and IPAB was faulty.

Since “interpretation” is always fraught with huge implications, there is more than the usual interest in this case. What is actually being sought to be established by Novartis, and is it possible for courts to do so? Can the Supreme Court arrive at a definition of “efficacy”? Can it set a benchmark against which the new form of the drug can be measured for efficacy? In this final attempt to get Section 3 (d) struck down Novartis has changed its counsel from Shanti Bhushan, the former law minister who is now the legal force behind Anna Hazare’s Jan Lokpal Bill, to Gopal Subramanium and Adhyarujina, both former solicitor generals of India.

The most curious part of this case is the intervention by Shamnad Basheer, who teaches at the National University of Juridical Sciences in Kolkata, the first time possibly that an academic has intervened in a case of this nature. Basheer contends that his petition is to “make submissions on the larger issues of patent law thrown up by the case”, according to the explanation posted on the Spicy IP website. This is not being looked upon with any favour by the Cancer Patients Aid Association, another of the respondents, which objected to his petition.

What’s clear is that defining efficacy promises to be a ticklish issue—and controversial whatever the decision.