Everybody coughs in Kumaon

... but the government has done nothing to monitor the prevalence of tuberculosis in the area. 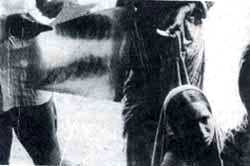 MY GRANDFATHER was young when he died of tuberculosis and our family was quite traumatised by the event. Thank God no one has to die of that terrible disease in today's world -- or so I thought, before I started my medical practice in Kumaon.

My first lesson about TB was that the patient suffers in two ways -- medico-physical, which can be tackled with the help of drugs, and social discrimination, which cannot.

I was winding up work for the afternoon when Noori came in. It did not require a clinical genius to spot that he was at an advanced stage of tuberculosis. To confirm the diagnosis, however, I would need an X-ray of Noori's chest, which would cost Rs 75. He turned out his pockets -- and Rs 1.50 was all he had for he was an unskilled labourer who earned a daily wage of Rs 15, averaging about 20 days of work each month. With a wife and two children to feed how would Noori ever raise the Rs 2,000 I estimated he would need to fight his deadly infection?

In another instance, Ram Singh, a shopkeeper in Reetha village, called me one evening to treat his wife. I found that she was suffering from typhoid, but because of a lack of treatment, she was in a serious condition. I scolded Ram Singh, assuming his negligence was to blame, but then I found out it wasn't. Ram Singh thought his wife had TB and had kept quiet because he was scared of being ostracised.

When I first met Gulab Singh, he was a strapping young man living in Sitla village. I had just started working there and whenever I needed him, he was always there to help -- cheerful and smiling. A year later, he developed a cough and began to lose weight rapidly. I suspected TB and tried to convince him to go in for a test, but he refused as he was terrified my fears would be proved true. Physically, Gulab remained healthy, but he became increasingly withdrawn. A year passed and Gulab continued to refuse tests to determine if he had TB. Then, the girl to whom he was engaged, broke it off and, unable to bear any more, Gulab committed suicide by concuming Novan, an extremely potent insecticide.

Anyone who watches Doordarshan would have seen an advertisement put out by the Directorate of Audio-Visual Publicity. It warns that any cough persisting beyond three weeks may be a symptom of TB.

Well, in Kumaon, coughs are so common I missed their significance altogether. I once examined an old man and asked him about his cough. He denied having one though after examining him, I knew for a fact he had been coughing for a long time to reach the state he was in. But he brushed all this aside, insisting his affliction was what everyone had frequently. Surely the Indian government has never surveyed all the slums in the country and examined the rural poor? TB at 2 per cent! Certainly not!

For identifying TB carriers, the government requires two sputum slides per day for every primary health centre. This, it calculates, will enable the monitoring of three million people each year. This is pure fantasy. The fact is that the conscientious health worker usually just spits on a couple of slides, stains them and hands them in. The others don't even do as much.

And what happens to people like Noori after their illness is diagnosed? Ostensibly, a lot. Once TB is identified, it is the responsibility of the district tuberculosis centre to see the patients get X-rays and drugs free of charge. The drugs are to be administered monthly and should should the patient fail to turn up, the patient is supposed to be contacted by post and then, if needed, through personal visit. What happened to Noori is that when he went to the district tuberculosis centre, he was shunted all about the place and then told to pay for everything except INH -- the cheapest anti-tuberculosis drug in the country.

The NGO I was working with seemed to have learnt its lessons from the Indian government. It was getting funds from abroad for dispensing free drugs; last year, it made a profit of Rs 14,000 from the sale of the drugs. So what am I, a doctor, to do? I couldn't fight either the Indian government or the NGO. And I couldn't tell Noori that he would die within a few weeks without proper treatment. So I gave Noori some vitamins and some medication to ease his breathing -- and hoped I wouldn't have to watch him die.

When I returned to Delhi, some friends working in a public hospital told me that 10,000 capsules of an expensive anti-tuberculosis drug had to be thrown away because they were past their expiry date. Evidently, a hospital pharmacist had forgotten all about them. Now, I'm amused when I read all self-righteous editorials sounding the alarm that the Dunkel proposals are going to kill our sick because they would put the cost of life-saving drugs beyond their reach. We don't need Dunkel to do that; we're doing a pretty good job ourselves. Amit Ray completed his MBBS in 1988 and worked in Kumaon for a while with a rural action group. At present, he is doing post-graduate studies in surgery and anaesthesia.