If you have made your plan to spend the weekend outdoors, think again. The weather is likely to wash it out and, more importantly, damage winter crops in many parts of India.

Let’s quickly understand how this system will be different.

What is upper air weather pattern?

Earth has a big atmosphere which is composed of different layers. One such layer, closest to earth’s surface, is called the troposphere. The troposphere usually extends to an attitude of about 10 km. Its extent varies from latitude to latitude and from season to season. The significance of this layer is that all the weather systems on the earth (like low pressure systems, high pressure systems, clouds) exist in this layer and hence it’s of great importance in weather forecasting. The troposphere, too, is composed of different layers of air having different temperatures, air pressures. The phrase “upper air” simply means upper part of this troposphere, say the layer which is at an altitude of about 30,000 feet (9,000 metre or thereabout). Aircraft fly through this upper air.

Upper air has another significant aspect. Strong currents of air known as jet streams circulate across the globe, mostly around this layer. Such currents are found in both the hemispheres of the earth and they usually move from west to east over higher latitude nations such as India. These jet streams are of two forms depending on the location where they are found. A stronger jet found over very high latitude regions (typically 50°-60° north/south) like in the northern parts of the US is known as a polar jet whereas the one which is found over India (typically around 30° north/south) is known as a subtropical jet. So when one says “upper air pattern”, it refers to the pattern in the flow of these jet streams. In most of the cases, these patterns determine the weather conditions. 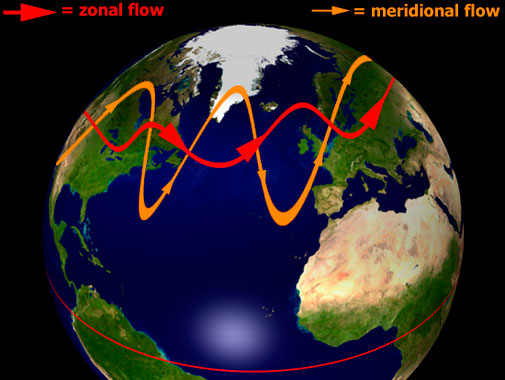 Two main patterns are observed in the flow of the jet stream. The red coloured pattern represents a zonal flow whereas orange indicates meridional flow. Mostly clear weather will be experienced in the regions above which the flow of jet stream is zonal. Along the orange path (the meridional flow), one can see that the jet goes up (this position is called as crest) and down (this position is called as trough). Weather forecasters keep on studying the weather charts, showing upper air conditions to monitor such crests and troughs. 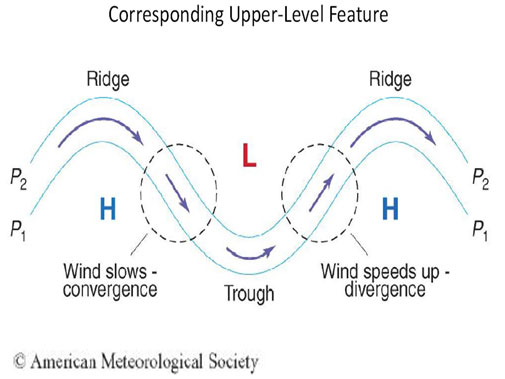 The above image gives more details of operational significance of such a upper air weather patterns. Arrows in the image represent the path of the current of air (or jet streams) whereas ‘H’ represents a high pressure region and ‘L’ represents a low pressure region. In meteorology, such crests are called ridges.

The ridge or an elongated region of high pressure is mostly associated with clear weather but the trough or elongated region of low pressure is mostly associated with bad weather, such as thunderstorms or rains. This is because an approaching trough destabilises the troposphere and often sets the stage of a severe weather outbreak. You can see that there are two regions which are represented by dotted circles—one to the left and one to the right of ‘L’ (low pressure). The region to the right is the “hotspot” of severe weather outbreak. This is the region where the winds of the jet stream accelerate and diverge in direction. This is a favouring condition for thunderstorm development. Troughs are also known to deepen the low pressure regions situated below them.

Western disturbances are observed in the middle parts of the troposphere unlike this trough whose appearance is in the higher parts of troposphere. 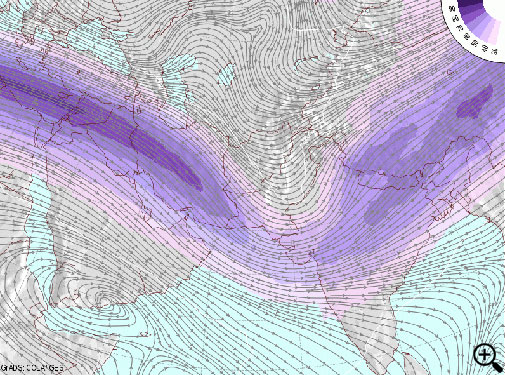 In the above image, arrows indicate the direction of winds at an altitude of about 35,000 feet (over 9,100 metre) above ground. The large purple-shaded region indicates the jet stream and the trough shape (U shape) can be seen over north-west India and adjoining Pakistan. 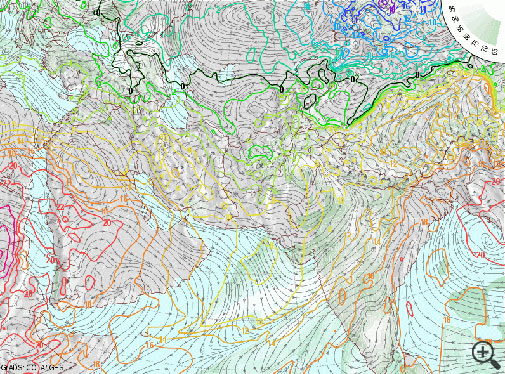 An associated low pressure at about 5,000 feet (over 1,500 metre) above ground will start deepening from Friday. On Saturday, this low pressure region would be near western part of Gujarat and this will influence the winds in the lower part of the troposphere. As this low pressure moves northwards—towards Pakistan, by Sunday (see above image), massive moisture incursion from the Arabian Sea will take place. As a result, the lower part of troposphere over western, central, northern and southern India will get filled with moisture, which would favour precipitation.

Precipitation to increase on Sunday

Light rains shift eastwards towards Odisha, Jharkhand and parts of West Bengal. Reduction in rains in north India and the weather will be normalising gradually.

This is a period during which the Rabi crops, such as mustard, gram and lentils require dry weather and most of them are usually harvested around this time. Hence, unseasonal rainfall can significantly damage them. Wheat, too, is approaching maturity and can get adversely affected due to heavy rains. As heavy rains are expected in major wheat growing areas of India like Punjab and Haryana, significant damage to it can be expected. Plus damage to other Rabi crops also expected due to the untimely rains.

In Maharashtra, particularly the Konkan belt, this untimely rainfall will affect the productivity of mangoes as it is the flowering season. Wheat and cotton grown in other parts of the state like Marathwada, Vidarbha may also get affected due to the rains.