Fear of asteroids is expensive

Imagine being roused from year-long sleep by a strange creature floating in zero gravity, just before landing on a distant inhabited moon.

In his new blockbuster Avatar, director James Cameron places himself in the camps of those who believe there is a potential to detect Earth-sized objects. Going by the people in this camp, habitable moons might also not be far.

The US is planning to establish a human base on moon by the end of the third decade of this century. According to American science journalist Guy Guliliota nasa has reasons for bases on moon. These include early detection and tracking of asteroids that are potentially dangerous to Earth.


According to a white paper released at the end of American Institute of Aeronautics and Astronautics Planetary Defense Conference in 2007 there are 850 asteroids or comets, perilously close to Earth. Scientists at the conference estimated this list could go up several times in the near future. A 140-metre asteroid can destroy a metro like Delhi within seconds. nasa believes the impact could be more disastrous than the most powerful atom bomb.

If these celestial bodies are approaching Earth from moon’s far side, radio telescopes installed on moon can detect them faster than telescopes on Earth. nasa also believes colonizing the moon offers other advantages include mining the rare helium-3 for use in future nuclear fusion reactors—much like Avatar where a group of mercenaries colonize a faraway planet, Pandora, to extract a valuable mineral.

According to Guliliota the American space agency believes extraction of oxygen from lunar soil can fuel the rockets for future interplanetary missions. The lunar gravity field will require a far less powerful rocket for lift-off as compared to rockets that set off from Earth.

Launching and fuelling facilities for rockets from moon would make it far easier for the future robotic and manned missions aimed at exploring Mars, the outer planets, Jupiter, Saturn, Uranus and Neptune and their moons.

But going by nasa estimates, the cost of human base on moon would be several hundred billion dollars. Lunar colonies will need protection from micrometeorites and harmful solar radiation. Spending such a large amount of money is open to debate. Billions of dollars meant for the colonization of moon can be diverted for research on technologies to curb natural disasters and for improving the health situation, educational network and employment in poor countries.

At the same time planetary research can continue with less costly unmanned space missions. Recent advances in optics, robotics and computer science have made it possible to send unmanned space vehicles with sophisticated telescopes, robots and soil and rock testing labs. 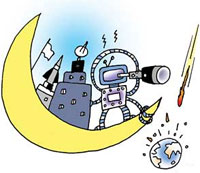 Even four decades back, the Luna mission of the erstwhile Soviet Union successfully brought back samples of lunar dust. In the last decade or so unmanned missions like the Voyager, Mariner, Viking and Pioneer have sent valuable information about celestial bodies.

In a 2007 article in the Journal of Earth System Science Indian geologist J K Pati and German physicist U W Reimold argued non-manned missions could be effective against dangerous asteroids. The scientists substantiated their claims by citing the performance of nasa’s spacecraft Stardust to Comet Wild 2, a celestial body that can cause damage to Earth. The mission helped understand the comet’s make-up which could help us take protective measures if it were to hit Earth. The scientists also wrote about the success of another nasa craft Deep Impact. It had returned with insights on Comet Tempel, another heavenly body perilously close to the earth.

The recently reported discovery of water on moon by India’s Chandrayan-1 mission is another example of the value of unmanned space missions.

To return to Avatar, the film is also about environmental destruction: how humans having ravaged Earth turn to colonize other planets—much to their peril. Its fantasy notwithstanding, there is a lesson in the film.

Aniruddha Uniyal is at ISRO’s Remote Sensing Applications Centre in Lucknow. The views expressed here are his own