I have been a political journalist for over three decades. Only recently have I become familiar with the nitty gritty of development reporting. The manner in which malnutrition is covered by a section of the media has come as an eye opener. It appears those who report on the subject generally confine themselves to presenting opinions of people with a similar viewpoint.

Take the controversy over the kind of food to be served under the Integrated Child Development Scheme (icds). If we are to go by some newspaper reports, the debate about the scheme has been reduced to whether you serve hot cooked meals or biscuits. Terms are loosely thrown around so that the public is misled. Precooked food for under-three-year-olds is projected as a kind of biscuit. Attempts to propagate use of internationally-proven strategies for combating malnutrition, such as fortification, are dubbed a conspiracy to push commercial interests.

Newspaper and magazine reports about the ministry of women and child development's February guidelines laying down nutrition norms to the state governments for icds give the impression this was just a ploy to push through the back door packaged food instead of the locally cooked meals recommended by the civil society, the Prime Minister and the Planning Commission. 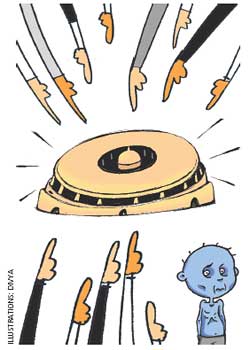 Now let us look at the facts. The guidelines clearly state hot cooked meals are to be provided for children above three. So where does the packaged food/ biscuits come into the picture? It appears the objection is to the recommendation of take-home rations (thr) for children under three years.

Children under three have to be fed several times a day and not in one go. They also need food rich in proteins and micronutrients. Though they are most vulnerable to malnutrition, they have until now been largely neglected in our nutrition programmes.

Those who argue against providing prepackaged thr do so ostensibly on the ground that it leads to corruption. This is akin to throwing the baby out with the bathwater. thr merely consists of locally available foodstuffs whether wheat, peanuts, gram, jaggery, soy, rice or wheat roasted and pulverized for longer shelf life. This is also called blended cereal food. Blended fortified food can be produced locally at the panchayat level or at the district or state level. Most precooked blended food which is currently used in the icds are prepared by small units or by the state public sector outfits. The Supreme Court when it banned the use of contractors in the scheme, was, presumably referring to middlemen. Most thr producers would hardly fall in this category.

The ministry stipulation that all the food served under icds should be fortified has sometimes been mischievously interpreted as an indirect method of bringing in commercially manufactured biscuits. Nothing could be further from the truth. Malnutrition is caused not simply by inadequate caloric intake, as many assume, but also by deficiency in the micronutrients essential for growth, immunity and fitness. Seventy five per cent of Indian children under three suffer iron deficiency, 50 per cent take less than half their daily requirement of vitamin A in their diets. Our children have high rates of zinc and foliate deficiency.

Opponents of fortification argue it is better to get the necessary micronutrients directly from fresh foods rather than adding artificial micronutrients to food. This is undeniably the best option, but hardly feasible within the limited icds budget. Since the poor do not have the luxury of the best option, is it fair to argue they be denied access to a viable alternative? Fortification is hardly about biscuits. Meals can be prepared by using fortified wheat, oil rice and dal analogues. In most parts of West Bengal the khichree served in the icds is fortified. So are the hot cooked icds meals served in many parts of Andhra Pradesh, Rajasthan and Madhya Pradesh.

The ministry guidelines were not on a minister's personal whims, as implied, but recommended by a committee comprising nutritionists and doctors including those from prestigious institutions, like the National Institute of Nutrition, Hyderabad and aiims in Delhi.

Coomi Kapoor, a contributing editor of The Indian Express, is an occasional consultant for the Global Alliance for Improved Nutrition