Flyash can be used viably

To meet India's annual growth rate of 7-8 per cent, coal is expected to maintain its dominant share of the electricity generation fuel mix. It is estimated that up to 80-100 million tonnes of flyash is produced each year by the low-quality coal used in India; however, only 10 per cent is utilised for commercial purposes such as cement- and brick-making. With little incentive to capture flyash, power plants typically dispose it in ash ponds--a slurry that can contaminate the ground and surrounding bodies of water. This has significant consequences for public health and the environment.

Curiously, technologies exist to capture almost all (99.95 per cent) of the flyash emitted, and flyash has commercial value. 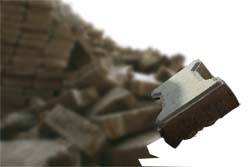 Much of the regulatory activities pertaining to flyash are focused on Delhi's three coal plants. In 1998, the Union government ordered the plants to utilise flyash from coal. In late 1999, the Union ministry of environment and forests (moef) ordered all new coal plants across India to use 100 per cent of their flyash in the first nine years of operation and all existing coal plants to use 100 per cent of their fly ash within 15 years. The regulation also stipulated that constructions within a certain radius of a power plant must use a percentage of flyash in their building material.

However, much of this remained on paper. In 2000, all three power plants in Delhi continued to ignore government demands, claiming it was too cost-prohibitive to install pollution control devices. In response, Union power minister Suresh Prabhu said that pollution controls were being mandated across the country.

This too was ineffective in retrospect--in 2003, moef warned coal plants to comply with environmental regulations or else face forfeiture of bank guarantees.
Flyash release can be reduced quickly. I will examine two ways to address the issue of flyash at the power plant level.

Pre-combustion methods of addressing flyash include using beneficiated Indian coal (washed coal) or blending low-ash foreign coals with high-ash Indian coal in order to achieve the desired ash content. There are advantages and disadvantages to both.

A study by the Central Fuel Research Institute in Dhanbad found if all coal burned in India were replaced by beneficiated coal (with ash level reduced from 40 per cent to 34 per cent), it would prevent the release of 8 million tonnes of flyash and 23 million tonnes of co2 annually.

However, beneficiated coal comes at a steep cost: Rs 765 per tonne compared to Rs 446-Rs 552 per tonne of unwashed coal. The cost of transport increases from Rs 724 per tonne to Rs 800 Rs per tonne. However, less coal is needed, so total costs are likely to decline.

Between 1993 and 1997, duties on imported coal dropped from 85 per cent to 10 per cent, making low-ash foreign coal an attractive option instead of using beneficiated Indian coal. Blending foreign coal and unwashed Indian coal produces an ash content comparable to that produced by beneficiated coal. But there is concern that mixed-origin blends are unreliable and may damage the power plant.

The post-combustion method to address flyash involves installing electrostatic precipitators (esps). These are fitted on the exhaust stream of a power plant and create a high-voltage field that attracts particulate matter. They can capture 99.5 per cent of particulate matter, although raising their efficiency will increase their size and costs exponentially. The efficiency of an esp is closely tied to maintenance efforts--lack of proper operation and maintenance can reduce efficiency by 60 per cent.

Even at the highest efficiency of 99.5 per cent, a fair amount of flyash will still be released given that power plants consume millions of tonnes of low-quality coal every year. If there were no incentive or regulation in place to ensure proper maintenance of esps, a significant amount of flyash would still be released, even with widespread implementation of these precipitators.

Therefore, it is viable to control flyash release in a short period of time. There is a clear need for more stringent pollution regulation, which should include stipulations for proper maintenance, and a mandate for the use of low-ash coal.

Alex Bandza is at Stanford University, USA. He is currently studying Economics with an emphasis on environmental and energy issues